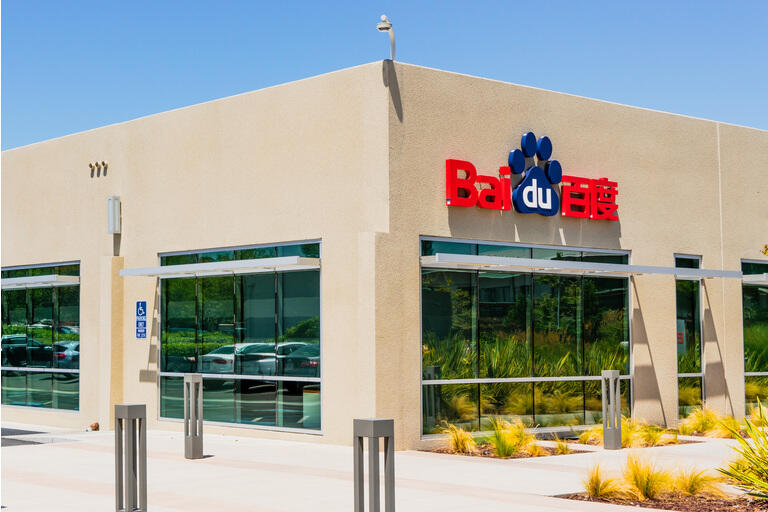 Baidu’s search/advertising business is enough to justify its current valuation. Although Baidu is a leader in self-driving as well, this revenue is currently immaterial. Around the year 2025, the cost of autonomous ride hailing may be low enough to jumpstart exponential growth and make investors to take note. But investors who want a margin of safety could buy now while this growth doesn’t appear to be priced in, in case it never comes to fruition.

Baidu is most commonly known as the Chinese equivalent of Google, i.e. a search engine. Since 68% of Baidu’s revenue comes from online marketing – such as search ads – this seems like a fair comparison. Baidu has 72% of online search traffic in China, a very high number that nears Google’s dominance in the rest of the world.

But Baidu stock has a meager 24% return over the last 10 years compared to Google’s 877% return. My first question with Baidu was what caused its underperformance.

From looking at key metrics, we can see that Baidu basically looks like a smaller version of Google. It has much less revenue and less operating leverage as a result, but its smaller size has allowed it to grow revenues more quickly over the last 10 years. Both companies are relatively shareholder friendly as far as buybacks, with Baidu actually buying back more stock relative to its market cap than Google over the past year and continuing to hold a large cash position.

While I’ve often argued that revenue growth should be a primary driver of long term returns, Baidu stands as a clear counterexample. It goes to show that every pattern in the stock market can be broken in extreme cases. In Baidu’s case, it’s worth noting that it would still have beaten the market if its P/S multiple simply matched Google’s now.

Another important difference to point out is the size of the companies. While Google is an undisputed tech giant in the American economy, Baidu’s $60B market cap is dwarfed by those of Alibaba and Tencent – the true Chinese tech giants.

There are a few reasons for this, including:

Thus, while Baidu never became the tech giant that its price a decade ago implied it would, things are not as bad as they may seem. The underlying business fundamentals have been passable – in fact quite good – over the last decade, a fact often overlooked by the stock’s poor performance. They continue to look good going forward as more advertisers digitize and the economy recovers. Baidu’s advertising business may not generate the rapid growth of today’s hottest tech companies, but it could still provide low double digit growth and a reasonable return on investment.

While some may view Baidu’s relatively small size as a concern, it actually excites me. This is because Baidu is pursuing some opportunities in AI that could come to represent a large part of its future market cap. A $100B opportunity would barely move the needle for Google, but it could more than double Baidu’s stock.

Having search as a primary business tends to offer an advantage in AI. There’s perhaps no other application where AI is so important in delivering a quality product. AI is used in search to process the user’s input and to sort results. Learnings from this application can naturally be applied to build effective AI in other applications.

In Baidu’s own words, “Years of tagging, understanding and intelligently processing all forms of content on the Internet – text, images and videos – with AI has helped us develop Baidu Brain, our core AI technology engine, which in turn has enabled us to further develop leading AI technologies and commercialize them through products and services for consumers, enterprises and the public sector.”

All indications are that Baidu’s AI is very high quality. Its ERNIE natural language processing framework “became the first AI model to score above 90 on GLUE (General Language Understanding Evaluation), which is widely considered as the benchmark for testing AI language understanding, and won the SAIL (Super AI Leader) award, the highest honorary recognition at the 2020 World Artificial Intelligence Conference.”

One obvious future application of AI is in driverless cars. Baidu is the first company to receive driverless licenses in both China and the U.S. and is actively testing driverless vehicles in China. While almost any company in the EV or self driving business tends to carry a sky high multiple, here’s Baidu trading at 3x sales and 8.5x earnings.

This isn’t just some pre-revenue startup either.

Baidu notes that: “Robotaxi operation represents a massive opportunity. We received T4 licenses, the highest level of autonomous driving test license issued by the working group led by Beijing Municipal Commission of Transport, which permits autonomous vehicles to operate in complex driving conditions, including urban roads, tunnels, school zones and other scenarios. Robotaxi is in the early stage of monetization and its revenue contribution is insignificant.”

This June, Baidu’s 5th generation robotaxi was released and it demonstrated a 60% drop in cost per mile. This is similar to the level of cost reduction shown in each of the previous generations. Baidu estimates that around the year 2025, the cost of a robotaxi will be lower than the cost of a traditional taxi/rideshare. If/when that happens, this space will see explosive growth, so investors may be rewarded for getting in at a reasonable price before that growth really takes off.

This level of growth is pretty impressive, and it isn’t possible in many more established industries. But it’s nowhere near over; robotaxis are currently available in 4 Chinese cities but Baidu plans to roll them out in 30 cities over the next 2-3 years.

Unlike most of the stocks I cover, there’s probably not much risk with Baidu from a valuation perspective. Even if the futuristic AI/self driving efforts don’t pan out, it’s hard to imagine Baidu falling much lower than the 8 P/E ratio it sustains with earnings from its current advertising business.

Even so, Baidu’s increased investments in growth could reduce earnings, especially if they don’t pan out. Baidu’s forward P/E of 16 could imply downside if it doesn’t come with increased growth. Similarly, advertising is a business that depends on economic conditions, so a slowdown in China’s economy could also hurt earnings.

There are other risks that come with operating in China, especially since Baidu deals with sensitive information. As I’ve previously discussed, China is generally less business-friendly than the USA since its legal system is less predictable. These regional risks may be amplified for Baidu, since its search business has to abide by censorship laws that could reduce traffic and create ESG risk. The flip side of this is that China is growing faster than the USA and its tech companies currently trade at lower valuations.

Like other Chinese companies, as western investors we don’t keep a close eye on their products and often can’t even try them out. Thus, we have to rely on secondhand accounts and metrics – which could be inaccurate or incomplete – to make our investment decisions.

The EV/self driving revolution is very exciting, but it’s one I’ve mostly stayed away from since it’s not my area of expertise and the sector is always quite heated. I like Baidu as a way to get some exposure to this sector without taking on too much risk. I’m excited to follow them on their journey to make self driving economically and legally viable.

Biden vs Xi: who has the upper hand for their summit?