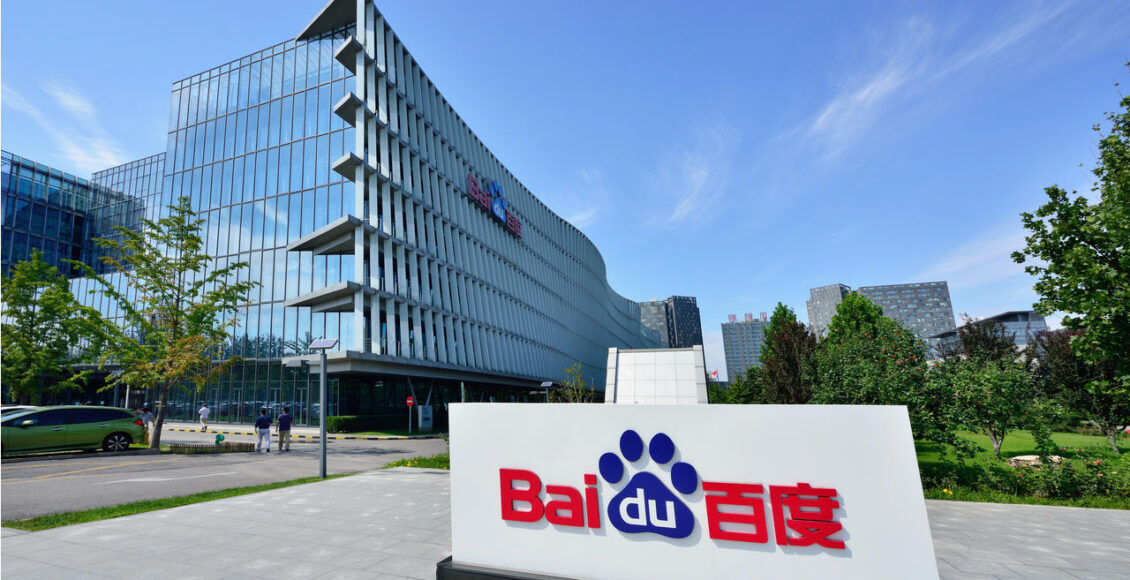 While the stock of Baidu has come back to earth in the last few months, the company as a ton of potential ahead. The Chinese internet search giant has finally returned to sustainable growth while building potential monster businesses to build on top of their search domination. My investment thesis remains very bullish on the Chinese tech giant as the stock has settled back around $190 and an EV of only $50 billion.

Baidu made an interesting prediction recently suggesting their AI business would surpass the core Online Marketing revenue base in the next 3 years. For years, the Chinese search giant has struggled to profitably grow the business with failed pivots into transactions and video businesses.

The end result was some revenue growth at the cost of profits with no consistent growth. The new AI businesses promise to transform the company while the Online Marketing business back to generating solid growth forecasted in the 25% range.

The AI revenue stream is mostly focused on AI Cloud now, but Baidu is quickly moving forward with the Intelligent Driving division from robotaxis to autonomous driving EVs. A big part of the revenue story in a few years is the growth in this area with the Chinese tech giant launching robotaxis in Beijing and announcing a deal with ARCFOX to produce a fleet of 1,000 Apollo Moon autonomous EVs will be built over the next three years.

For Q1, Baidu produced revenues of $4.3 billion and guided to Q2 revenue of up to $5.0 billion. The core business is set to grow anywhere from 20% to 33% over a quarter last year where revenues were flat following a COVID-19 hit.

The Baidu core business grew 34% in the quarter, but the AI business surged 70% over last Q1. The AI business is now 21% of the company and CEO Robin Li forecast on the Q1 earnings call of the AI business revenues topping the advertising business by 2024:

The forecast by the CEO is very interesting, especially with the Online Marketing business growing at a solid annual clip now. In such a scenario, the AI business has to produce substantial growth to overtake the advertising business in just three short years.

For Q1, Online Marketing revenue was $2.5 billion while the AI revenue was $0.65 billion. The revenue from iQIYI (IQ) accounted for the other $1.2 billion of revenue reported by Baidu, but the business only grew 4%.

If the advertising business grows at a 15% clip, the business will grow to $3.8 billion in Q1’24 revenues. The AI business must add over $3.1 billion in quarterly revenues in those three years to match the revenues of the Online Marketing business.

A lot of this growth comes from the Intelligent Driving business where the company suggests the total 2025 TAM of the market in China will reach $467 billion, or ~9x the size of the Online Marketing business.

In essence, Baidu guided towards Q1’24 revenues of nearly $8 billion before even adding in the iQiyi business. The analyst community has the tech giant only generating 2023 revenues of $26 billion suggesting numbers are far too conservative when this Q1 target would push total revenues for 2024 towards $40 billion considering the first quarter revenues are seasonally weak.

In the past, Baidu has always seemed to copy the business model of Alphabet (NASDAQ:GOOG) (NASDAQ:GOOGL). The search business was a similar start to Google and the purchase of iQiyi always seemed to mirror Google’s acquisition of YouTube while the two giant economies haven’t taking similar paths.

The move into the video business hasn’t worked out to the same extent with iQiyi still struggling to even come close to generating profits. The further move into Smart Transportation and Intelligent Driving appeared to mirror the Waymo business of Alphabet, but Baidu has moved ahead of Alphabet as China appears far more aggressive in this area.

The Chinese tech giant is already moving aggressively forward with paying robotaxi customers and taking the next step of building vehicles while Waymo has suddenly lost a lot of their executive team.

Due to years of underperformance as Baidu has cycled from one promising business to another, the stock now trades at a far lower multiple to Alphabet. The U.S. tech giant now trades at 2x the forward P/S ratio of Baidu while the Chinese stock suddenly has promising growth ahead. 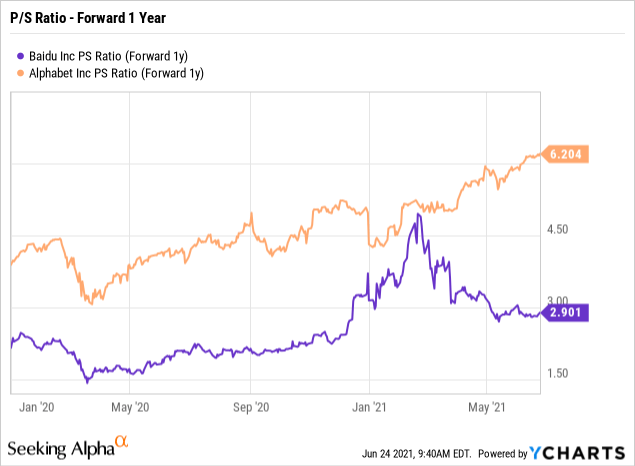 Baidu could easily close this gap with the growth in the AI business. On the backs of the EV business, the stock rose to over $350 where the P/S multiples were nearly equal for a brief moment.

As the CEO mentioned on the Q1 earnings call, the EV business isn’t the focus of the company. Baidu sees the EVs as the automotive technology of the day to implement the Apollo driving technology for autonomous cars and robotaxis. The company sees the technology as the distinguishing factor in the auto sector, not the manufacturing plants to build the vehicles.

The key investor takeaway is that Baidu remains a cheap Chinese tech stock. The company probably warrants the discount due to years of struggling with competitive threats in the search sector and a focus on businesses that have dinged margins. With execution in the AI sector and especially in Intelligent Driving, the stock is poised for multiple expansion in the next couple of years as revenue surges past conservative analyst estimates.