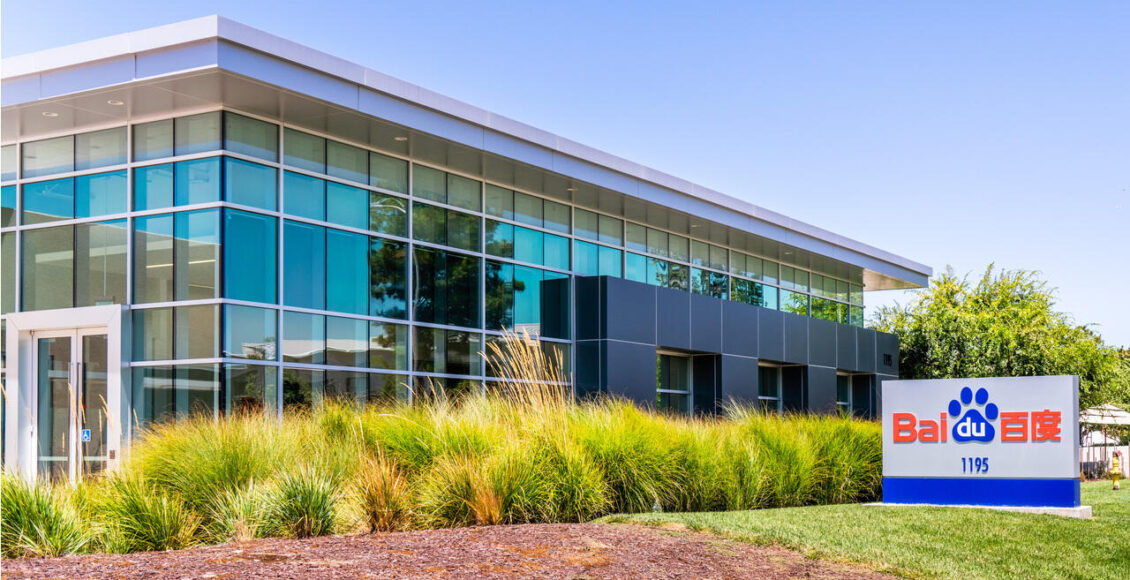 Baidu is feeling the pain along with the broader Chinese tech sector as a result of China’s regulatory crackdown. BIDU is down almost 30% on a YTD basis and sentiment is at rock bottom levels. 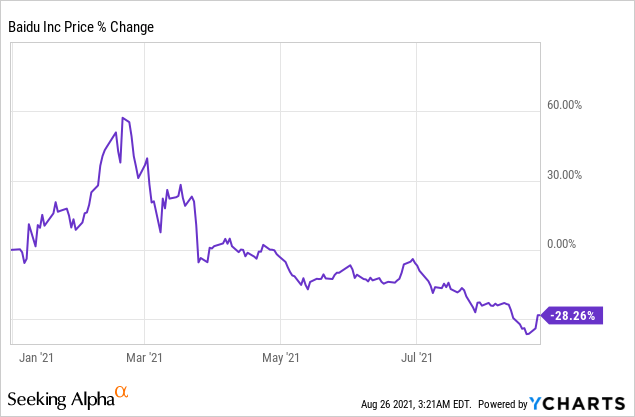 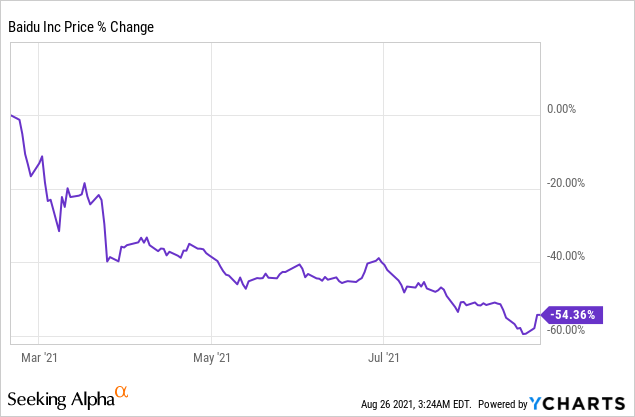 All of this is happening despite global markets hovering around record highs and, more importantly, despite BIDU’s solid financial performance and global leadership in AI (artificial intelligence), including self-driving technology through Apollo (robotaxis, robobuses, etc.). 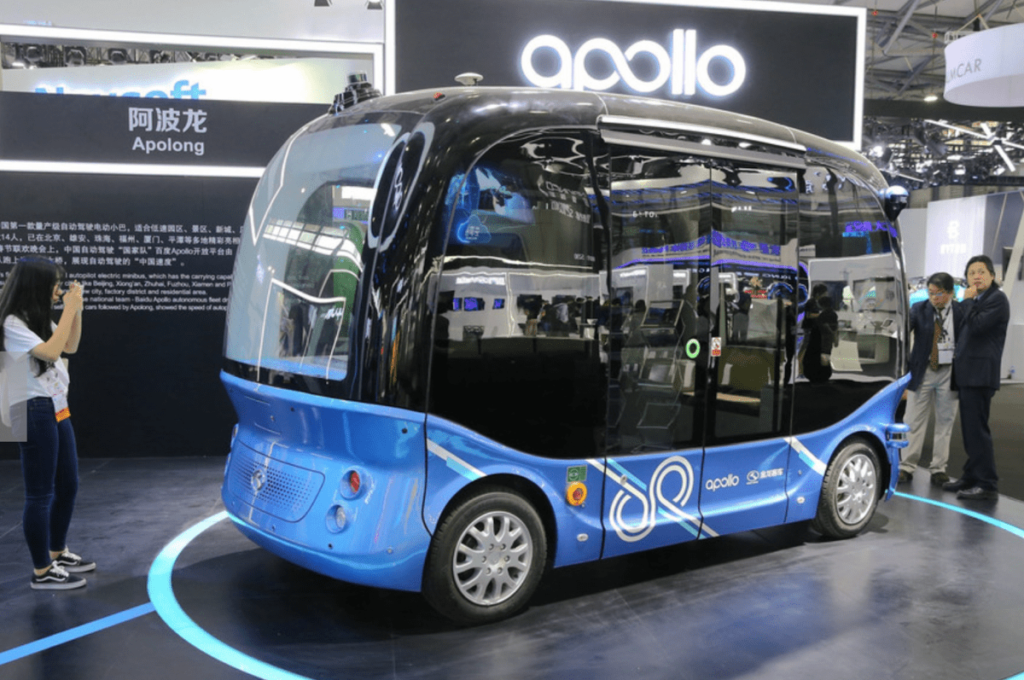 When thinking of AI powerhouses and global leadership in general, the focus tends to be around the US tech giants such as Alphabet and Microsoft. Baidu is often referred to as the ‘Google of China’ since it dominates China’s internet search engine market, controlling more than 70% of the market share. However, just like Google, it’s so much more than just a search engine. Baidu has exposure to several exciting high growth areas, including among others, AI, chips, cloud computing, intelligent driving/electric vehicles, etc. The list goes on. It also owns a strategic stake in iQIYI (the ‘Netflix of China’).

One thing is for sure: Baidu is placing its future on AI. It is no coincidence that today Baidu refers to itself as “a leading AI company with a strong Internet foundation” whereas up until recently, specifically until Q4 2019 earnings, Baidu described itself as “a leading search engine, knowledge and information centered Internet platform and AI company”. It is clear that Baidu is repositioning itself to shift investor perception away from being viewed as ‘a search engine with some AI capabilities’ to being viewed as a ‘leading AI player which also happens to own a leading search engine among other things’. Baidu elaborates on its leading AI position as follows:

We are one of the very few companies in the world that offers a full AI stack, encompassing an infrastructure consists of AI chips, deep learning framework, core AI capabilities, such as natural language processing, knowledge graph, speech recognition, computer vision and augmented reality, as well as an open AI platform to facilitate wide application and use. We have put our leading AI capabilities into our products and services, as well as innovative use cases.

All this sounds good on paper. However, unlike Google, Baidu gets very little recognition by the market as evidenced by the very low valuation. This has been further exacerbated by the regulatory crackdown.

Going back to financials, I feel that I am getting an amazingly good bargain with Baidu trading at ~$150 per share, underpinned by strong cash flow generation, which in turn translates into a fortress balance sheet (an ever-increasing cash balance). Specifically, annual cash from operations has consistently exceeded the $3 billion mark since 2015, surpassing $5 billion for FY 2017 and FY 2018. For the 12 months ended December 2020 cash from operations stood at ~$3.7 billion. 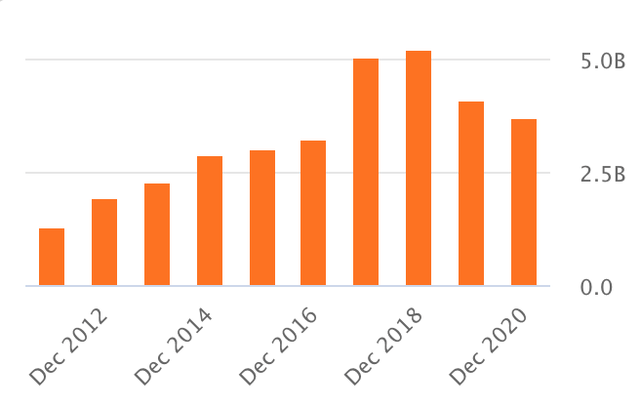 Overall, the trend has been positive since 2011 but not in a linear fashion (there have been several ups and downs). On the other hand, the evolution of Baidu’s cash position has followed a linear pattern. Specifically, as of 30 June 2021, Baidu’s total cash, cash equivalents and short-term investments reached a new record of ~$26 billion (excluding iQIYI). 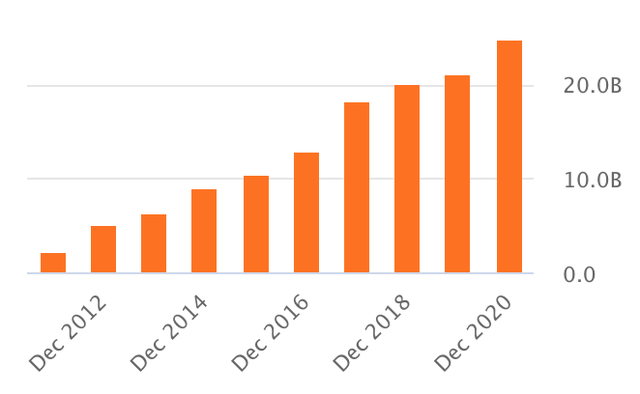 The total cash balance of ~$26 billion represents around 50% of the current market cap, which is remarkable! What’s more, on a net basis (i.e. after subtracting loans and notes payable), the net cash position stands at ~$13 billion which represents around 25% of the market cap, which is still remarkable and demonstrates that the market is placing very little value to Baidu’s AI projects, legacy search business, iQIYI, etc.

Going forward, things are likely to get better for Baidu. Revenue growth is exceeding 25% YoY (boosted by AI cloud growing 71% YoY). Intelligent driving and other growth initiatives, including Xiaodu which recently closed a new funding round at a $5.1 billion valuation, will help drive future revenue growth. As such, it is reasonable to assume that eventually annual net operating cash flow will consistently surpass the $5 billion mark and cash-rich Baidu will get cash richer. Management seems to share my confidence in the company’s future prospects and is buying back shares, bringing the cumulative repurchase to $2.5 billion since 2020 under the 2020 Share Repurchase Program. Unlike others, I see the recent sell-off as a great buying opportunity. Sure, there are risks, mostly regulatory, but I feel increasingly comfortable especially with the company’s large and growing cash position, which provides a margin of safety. A strong cash cushion will help the company weather the storm without derailing the long-term AI-oriented plan.

That said, one could argue that we are all very well aware that Baidu’s business is strong, with promising AI prospects and a fortress balance sheet, but this has not been enough to prevent the share price from crashing more than 50% from its all-time high. Fair enough. My response is as follows: There is no doubt that sentiment is at rock bottom levels right now. We can debate all day about the Chinese government’s intentions and regulatory concerns in general, but I feel we have reached the point of excessive fear which leads to overanalyzing things, sometimes reaching paranoia levels. To a large extent, this fear is driven by US-China relations. In times of turmoil, one needs to take a step back from the headlines and go back to basics, focusing on long-term fundamentals. I have stressed tested my investment thesis via the following conservative scenario:

While many might think that the above scenario is pessimistic, it is better to be on the safe side. I will become even more pessimistic by assuming an artificially high maintenance CAPEX requirement of $1 billion per year in order to maintain existing levels of operations. Even in this adverse scenario, Baidu can accumulate cash of $2 billion per annum, or $20 billion over the next decade, all else constant. Note, this $20 billion will be added on top of the existing cash balance of ~$26 billion. In other words, over the next 10 years, the total cash balance will surpass 85% of Baidu’s current market cap, all else constant. This suggests that the margin of safety is huge and Baidu’s valuation is dirt cheap. That said, for what it’s worth, my view is that 10 years from now, Baidu will be generating operating cash flow of at least $7.5 billion per annum, driven by various AI initiatives and Apollo taking the front seat. Also, don’t discount the legacy search business as it will continue to generate attractive levels of cash flow. These are challenging times and it will take some time for the dust to settle. Baidu has been on my radar for years and the recent sell-off made me comfortable to initiate a position. Always remember, the value of cash is unambiguous, and cash is king. At some point, the market will not be able to disregard Baidu’s growing cash balance as a percentage of market cap. I don’t think it is even remotely possible that we will ever see Benjamin Graham’s extreme net-net situations whereby the cash position exceeds all liabilities and the market cap ends up being lower than the net cash position.

Biden Plans to Launch a G7 Global Infrastructure Push to…