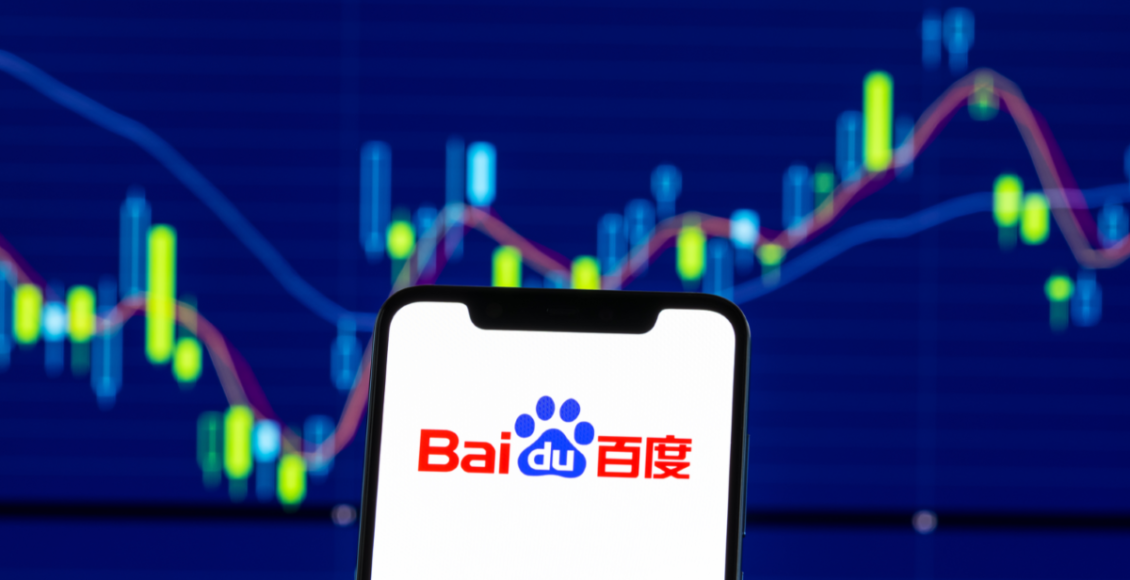 Beijing is cracking down on various sectors in the Chinese economy in a bid to reassert itself. The crackdown on private enterprises forced shares of Baidu significantly lower in 2021, but the firm’s digital business is growing rapidly. The big drop in tech valuations this year creates an opportunity to engage!

The Chinese government is using a heavy-handed approach to control its economy and reign in companies it deems to have become too powerful. Beijing dropped the hammer on Alibaba in April and handed the e-Commerce company a $2.8B fine because of alleged anti-competitive practices. Alibaba was just one out of many companies that drew the ire of the Chinese government, with crackdowns accelerating in 2021. China’s anti-trust agency, the State Administration for Market Regulation, fined Baidu and Tencent 500,000 Chinese Yuan ($77,000) for past acquisitions without notifying authorities. Beijing most recently intervened in the private education market and limited the sector’s ability to raise capital abroad. Beijing is also said to want to increase supervision of foreign-listed companies, particularly those that deal with sensitive consumer data.

Despite the crackdown on technology and internet companies, Baidu offers great value because its core business is booming and the stock has dropped more than 50% since February. Baidu also generates significant amounts of cash from its business, which is now accessible at a discounted valuation.

What stands out from Baidu’s most recent earnings card is that the company had a very successful second quarter, regarding commercial performance. While China’s crackdown on the tech sector, which is not Baidu-specific, attracted a lot of attention in 2021, the internet giant quietly executed on its business plan and reported impressive sequential growth rates. Baidu’s second quarter revenues reached 31.4B Chinese Yuan which is the equivalent of $4.9B… which represents a growth rate of 11% quarter over quarter. Baidu’s revenue growth was driven by continual strength in its core digital marketing business and its AI cloud business. 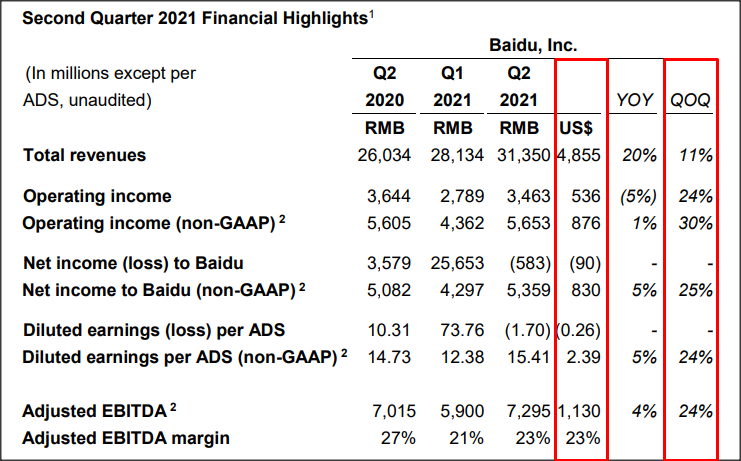 Baidu has evolved into an internet conglomerate with investments outside the digital world. To achieve even more revenue growth in the future and diversify, Baidu signed an agreement with Chinese automotive manufacturer Geely earlier this year in which the company commits to bringing a self-driving electric car to market by 2024. The EV sector is unlikely to experience regulatory intervention from Beijing because investments in the electric vehicle market are heavily encouraged and subsidized by the Chinese government, in part because these investments align with Beijing’s climate change goals. China has set a goal to become carbon neutral by 2060 and Baidu has said it wants to become carbon neutral by 2030. Baidu also invests in its autonomous driving platform, augmented reality, and the firm has a 56.2% investment in iQIYI, an online entertainment service that is often compared to Netflix.

The biggest reason to own Baidu, however, may not relate to its many different businesses. The gem in Baidu’s business is still its search engine which, in part because of Alphabet’s absence from the Chinese market, has a commanding lead in the sector. Baidu has a market share in the search engine market of over 70%, giving the internet giant a significant lead over its second-largest rival in the market, Sogou, which has a market share of just 14%.

A leading market share in online search is worth a fortune to advertisers who keep flocking to the number 1-ranked Chinese search engine. According to Alexa, Baidu is the 5th most visited website in the world and China’s large population of 1.4B suggests that many more top-visited websites in the world will be in the Chinese language in the future. Baidu’s revenues from online marketing services increased 18% year over year in the second quarter and 22% year over year in the first six months of FY 2021, based on Chinese currency values, because advertising markets gained strength this year as the world slowly recovered from the COVID-19 pandemic. Second quarter revenues, as they relate to Baidu’s online activities, were 20.8B Chinese Yuan which is the equivalent to $3.2B. Core online marketing services generate about 64-67% of Alibaba’s total revenues, a percentage that has proven to be stable over time. Going forward, Alibaba should continue to generate the dominant share of its revenues from its online market/advertising business.

Baidu’s core internet business is hugely profitable, in part because Baidu has such a large market share. For that reason, Baidu’s business generates a lot of cash. Baidu’s second quarter cash flow from operating activities was 9.4B Chinese Yuan ($1.5B), excluding iQIYI-related cash flows. After investments, Baidu generated a free cash flow of 6.9B Chinese Yuan ($1.1B) in the second quarter. Streaming company iQIYI is a heavy burden on Baidu’s financial statements because the streaming business keeps losing money and Baidu consolidates the streaming company into its financial statements. Baidu has looked into selling the Netflix-like business to Tencent last year, but the deal fell through. I expect Baidu to monetize its 56% stake in iQIYI and sell the company in FY 2022 or later.

Baidu’s total second quarter free cash flow was 5.4B Chinese Yuan ($843M) which calculates to a free cash flow margin of 17%. Baidu has been consistently positive on the free cash flow side and the internet giant has a cash-rich balance sheet because of it.

Baidu and Alphabet have a lot of business overlaps, although they are not direct rivals that operate in the same market. Both companies take a large share of their domestic advertising markets and invest in various technologies of the future, such as artificial intelligence, autonomous vehicles and augmented reality, to diversify their businesses. Alphabet is about 13 times larger than Baidu regarding revenues and has a market value about 32 times larger than its Chinese rival.

Besides a revenue and market value gap, there is also a valuation gap, which can be traced back to the beginning of the article where I touched on Beijing’s attempt to control a larger share of the private economy. Because of the crackdown and resulting drop in Baidu’s market value, the firm’s revenue and profit growth are now significantly cheaper than Alphabet’s growth although Baidu, in the short term, deals with more uncertainty and risk than Alphabet.

Growing regulatory intervention is a risk for Baidu and the stock. Should Beijing continue to escalate its regulatory crackdown, even in sectors outside of Baidu’s core business, US investors may prefer to stay away from Chinese technology stocks, which many already do. Longer term, Baidu faces strong growth prospects in its core business, online search, but also in its diversified investments in intelligent driving, augmented reality and artificial intelligence. The risk with Baidu may be higher than with the average US tech company, namely Google, but the upside may also be larger.

Doing business in China, and Asia, in general, is different than doing business in Western countries. China’s government sees itself as a steward of the economy and regularly cracks down on the economy, but then takes a hands-off approach and lets companies get back to work. China is a rational actor and has an interest in its leading tech companies doing well and being able to compete with the best. Baidu’s business grows, generates a lot of cash, and the 50%-discounted valuation makes Baidu a stock with a risk profile that is skewed to the upside!