Chinese financial regulators have started early stage discussions on a potential revival of Ant Group Co.’s initial public offering, according to people familiar with the matter, one of the clearest signs yet that authorities are dialing back a crackdown on the tech industry that began with the scuttling of the world’s biggest listing almost two years ago.

The China Securities Regulatory Commission has established a team to reassess the fintech giant’s share sale plans, said one of the people, who asked not to be named discussing private information. Authorities are also nearing the final stages of issuing Ant a long-awaited license that would clear the path for an IPO and make the company regulated more like a bank, the people said.

While the timeline for the license and potential listing will hinge on approvals from senior Chinese leaders, evidence of progress on both fronts is likely to reinforce investor optimism that the worst is over for the country’s embattled private sector. Chinese tech stocks have soared in recent weeks, buoyed by a report that authorities are preparing to wrap up a probe into Didi Global Inc. and restore the ride-hailing company’s main apps to mobile stores.

A meaningful relaxation of curbs on Ant and Didi — the most high-profile casualties of President Xi Jinping’s sweeping clampdown on the country’s tech giants — would send a powerful signal that policy makers are following through on recent pledges to support the industry. The Communist Party’s evolving stance toward the private sector has become one of the most closely watched developments in global markets in recent years, with some observers going as far as to call China’s sprawling internet sector uninvestable.

Alibaba Group Holding Ltd., which owns a stake in Ant, climbed as much as 7% in pre-market trading on Thursday, pacing gains in US-listed Chinese shares after Bloomberg’s report on the potential IPO revival. 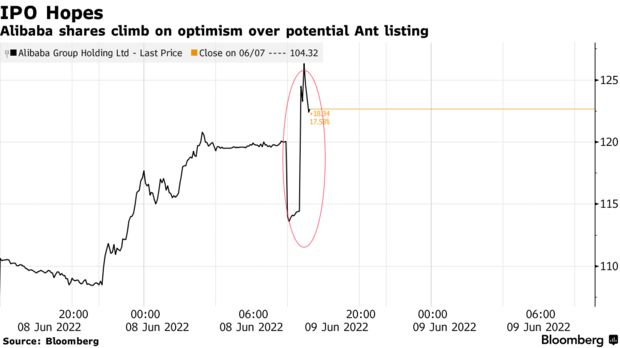 “We now firmly believe that the worst is past us for China tech in particular from a regulatory point of view,” said Kerry Goh, the Singapore-based chief investment officer at Kamet Capital Partners Pte. “The impact from the economic slowdown we don’t know yet.”

The crushing of Ant’s $35 billion IPO in November 2020 sent shock waves across the financial world, burning investment firms from Carlyle Group Inc. to Temasek Holdings Pte that had expected a windfall. It also marked the beginning of a broader crackdown that ensnared some of China’s fastest-growing companies, erased more than $1 trillion of market value and caused a reckoning within the country’s billionaire class.

Ma, China’s most famous entrepreneur, has mostly disappeared from public view since giving a speech that criticized regulators on the eve of the scuttled Ant IPO. Many of his peers have relinquished their formal corporate roles and increased donations to charity to align with Xi’s vision of achieving “common prosperity.”

While investors are likely to welcome any signs that the tech crackdown is easing, a return to the heady days of 2020 appears unlikely. Myriad regulations imposed on Ant over the past two years mean the company is worth a fraction of its former self, according to some early backers. Fidelity Investments, for instance, slashed its valuation estimate for the firm to about $78 billion last June from $235 billion just before the IPO was abruptly suspended. 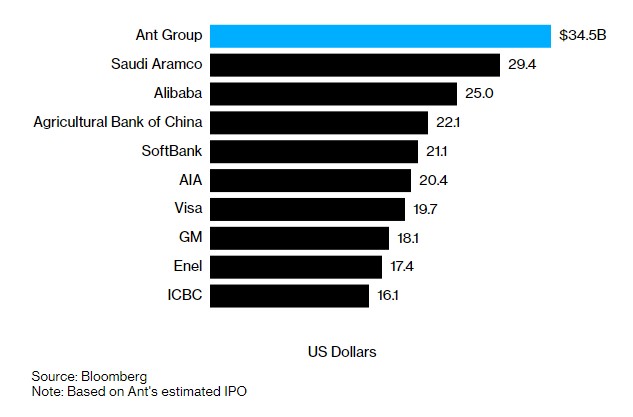 China’s securities regulator is initially looking at Ant’s plans for a Shanghai listing, one of the people familiar said. The company eventually expects to conduct a dual-listing in Shanghai and Hong Kong, another person said.

In one sign of progress, Ant recently appointed Hong Kong stock exchange Chairman Laura Cha as an independent director. The move was blessed by regulators in Beijing, people familiar with the matter said. Authorities have also been expediting decisions on Ant’s restructuring proposals in recent weeks, one of the people added.

Alibaba has surged in US trading since the Wall Street Journal reported that China is close to wrapping up probes into Didi and two other firms, moves investors have interpreted as a signal that some of the most beaten-down tech stocks are finally due for a reprieve.

The Hang Seng Tech Index has advanced 36% in Hong Kong from this year’s low in March, while the Nasdaq Golden Dragon China Index of US-listed shares has jumped 53%. The latter index is still down 62% from its peak in early 2021.

After derailing Ant’s IPO, regulators ordered the Hangzhou-based company to overhaul its operations and set up a financial holding company for its wealth management, lending and credit scoring businesses so they can be more closely regulated.

Authorities are now preparing to issue Ant a financial holding company license, the people said, though it’s unclear how quickly a final decision on this will come.

As part of the restructuring, Ant has ramped up its capital base to 35 billion yuan ($5.2 billion) and moved to build firewalls in an ecosystem that once allowed it to direct traffic from its payment app Alipay, with a billion users, to services like wealth management, lending and delivery.

Consumer loans jointly made with banks — previously a major engine of growth — were split from its “Jiebei” and “Huabei” brands. Assets under management at its money-market fund Yu’ebao — once the world’s largest — dropped 15% from a year earlier to 825 billion yuan as of March.

China Securities Regulatory Commission says it’s not conducting review and research work regarding an Ant IPO revival, but it supports eligible platform companies to list overseas, according to a statement from the securities regulator, Bloomberg News reports.

US joins 55 nations to set rules on future of the internet,…