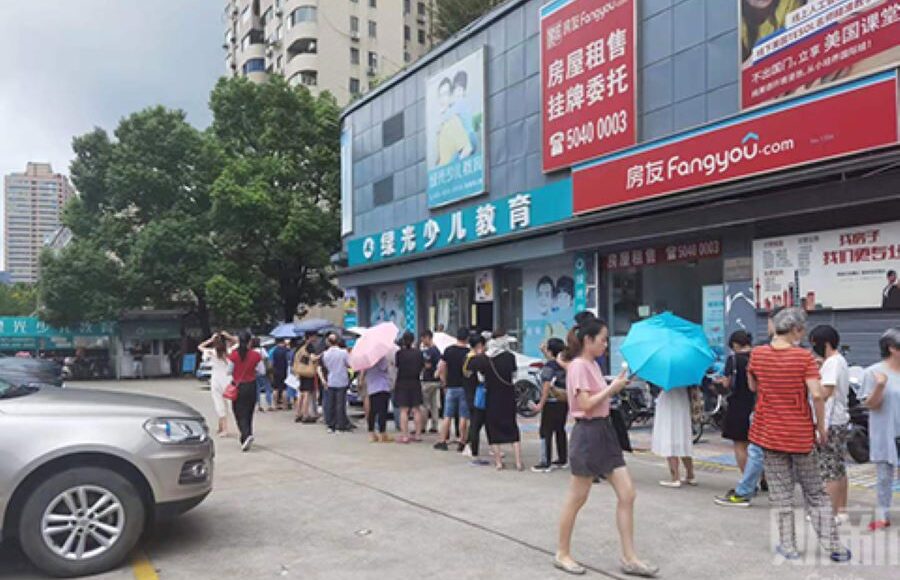 A 20-year-old children’s English and math tutoring company in Shanghai abruptly shut down Friday, leaving thousands of parents claiming tens of millions of yuan of prepaid tuition amid the fallout from China’s restrictive new rules on the private tutoring industry.

Greenlight Kids Education, a well-known tutoring company with more than 30 campuses in Shanghai, said Friday on its official WeChat account that all the campuses were closing, and the company would arrange refunds for remaining classes Friday afternoon.

When parents went to one of the company’s campuses at Pujian Road, they found the office building vacant and a person claiming to representing a third party handing out forms to parents to register students’ information and remaining classes. No staff from Greenlight was at the site and the third-party person didn’t reply when asked when refunds would be paid, some parents told Caixin.

Zhu Jin is listed as Greenlight’s CEO, according to business registration data. Zhu couldn’t be reached Friday for comment.

The Greenlight closing is part of a series of tutoring company shutdowns since China issued new rules in July barring for-profit companies from providing instruction in core curriculum subjects. On Aug. 26, the founder of a children’s English-teaching provider in Hangzhou was arrested after the company continued to sell courses and refused to issue refunds after it ceased operation.

Based on the refund forms, the Pujian Road campus has at least 100 students, who each paid unused tuition of as much as 60,000 yuan ($9,000). Most of Greenlight’s classes cost 268–375 yuan each. As the school offered discounts for a large prepayments, many parents deposited tens of thousands of yuan to their Greenlight accounts, parents said.

The remaining balance of unconsumed tuition at the Pujian Road campus alone amounts to more than 1.6 million yuan, according to the refund forms.

But the forms didn’t ask parents to provide a bank account for refunds, some parents said. Parents who went to Greenlight’s headquarters said those offices also were vacant.

Greenlight recently aggressively urged parents to pay for more courses, and many parents signed up for more classes just a week ago, some parents said.

A regional manager at Greenlight recently asked parents to pay tuition to his personal account instead of a company account, according to text massages provided by some parents. They said they suspected that the manager might have known the company was going out of business.

Another regional manager at Greenlight was touting classes to parents just several days ago, claiming the company’s courses are not subject to the regulatory ban, a parent said.