“This administration inherited a set of 301 tariffs imposed by the Trump administration that I think really weren’t designed to serve our strategic interests,” Yellen told lawmakers on Capitol Hill Wednesday.

Yellen’s comment referred to Section 301 of the Trade Act of 1974. Trump used that law to hit China with the tariffs starting in July 2018 after an investigation concluded China stole intellectual property from American companies and forced them to transfer technology.

While China is guilty of unfair trade practices and the US should be acting to protect its national-security interests, some of the existing tariffs have hurt American consumers and businesses, Yellen said.

President Joe Biden’s team is weighing what to do with Trump’s tariffs on about $300 billion of goods imported from the US economy’s biggest rival. While some businesses have benefited from the tariffs protecting them from Chinese import competition, companies that use the goods as inputs in areas including manufacturing have been hurt.

Tariffs, by percentage rate, imposed by the U.S. and China on each other since March 2018 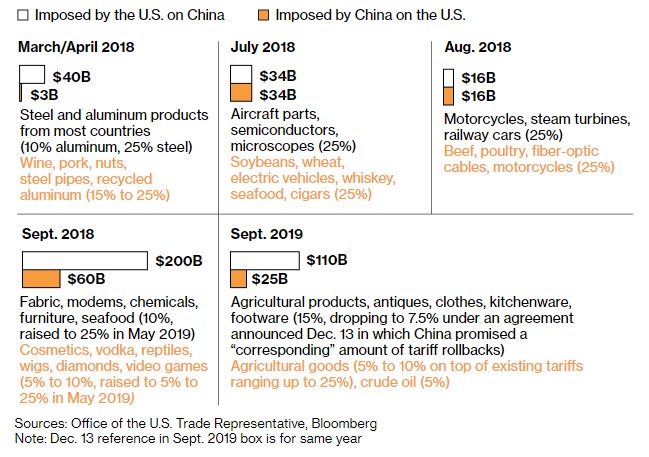 “We are taking a look at those and looking to reconfigure those tariffs in a way that would be more strategic,” she said.

The Treasury chief also acknowledged, when responding to a question from Florida Democrat Stephanie Murphy, that tariffs were contributing to goods inflation.

Tariff reductions “could help to bring down the prices of things that people buy that are burdensome,” Yellen said, but added, “I honestly don’t think tariff policy is a panacea with respect to inflation.”

Yellen wouldn’t give a timeline on potential tariff changes beyond saying they may take place in “coming weeks.”

Senior administration officials’ views on what to do with the duties differ: Yellen in April suggested the US is open to roll them back to help tame price growth, while US Trade Representative Katherine Tai has highlighted the leverage that the duties provide at the negotiating table with China.

On Sunday, Commerce Secretary Gina Raimondo said it “may make sense” to lift tariffs on some goods as a way to tame the hottest inflation in almost four decades.

A year of living dangerously: timeline of Beijing’s…