China’s top leaders vowed on Friday to hit this year’s economic growth target while also sticking with a Covid Zero strategy that has locked down major cities. Economists doubt they can do both.

Led by President Xi Jinping, the Communist Party’s 25-member Politburo said “Covid must be contained and the economy must be stabilized,” a recognition that weekslong lockdowns in the financial hub of Shanghai and elsewhere are taking a toll on growth. The statement, released during trading hours in an unusual move, appeared designed to bolster China’s beaten-down markets heading into a long holiday weekend.

Reiterating Xi’s pledge to focus on infrastructure, the Politburo said authorities should “waste no time in planning more policy tools” to strengthen the economy. The benchmark CSI 300 Index rose 2.4% on Friday, eking out a small weekly gain for the first time this month, while the offshore yuan strengthened in a reversal from earlier in the day.

But despite the positive reaction in the markets, the statement didn’t give specifics on fiscal stimulus or monetary easing that could invigorate the world’s second-biggest economy. Economists forecast gross domestic product to grow just 4.9% this year, well below the government’s target of around 5.5%.

“Those easing measures, even on a large scale, may not achieve their intended impact due to lockdowns and logistics disruptions as a result of the Zero Covid strategy,” Lu Ting and other Nomura Holdings Inc. economists said in a note on Friday.

The competing goals show a growing political problem for Xi during a year in which he’s expected to secure a precedent-breaking third term in office. His government has long trumpeted China’s Covid Zero policy as morally superior to the U.S. and Europe, making it hard to abandon now even as it jeopardizes the Communist Party’s economic goals and disrupts life for ordinary people.

Top health experts have also warned that China’s health system would be overwhelmed and deaths would rise if the Covid policy was abandoned.

China’s GDP seen to expand 4.9% this year, below government’s target

Some investors expressed confidence Xi could find a way to hit the growth target despite the lockdowns. China’s authorities are poised to continue loosening monetary policy, adopt a more supportive fiscal policy and ease up on enforcing regulations, said Alexander Treves, head of investment specialists for Asia Pacific equities at JPMorgan Asset Management.

“Those are all things that they can control at the same time as managing Zero Covid and hit their growth targets,” he said. “So we think the likelihood of stimulus is incredibly high at the moment.”

Others said the Politburo’s concern about the economy suggested China will ease up on its virus controls, despite the calls to maintain vigilance against omicron and other variants.

“In the past few weeks the top priority seems to be containing omicron outbreaks — now the goal is to balance containing outbreaks and economic growth,” said Zhiwei Zhang, chief economist at Pinpoint Asset Management. “This suggests the government may fine-tune the ‘zero tolerance’ policy to allow some flexibility.”

Based on how China has clamped down to stem Covid outbreaks, it’s hard to see how authorities can ramp up growth while maintaining the same approach to the virus.

A case in point is the northeastern province of Jilin, which began locking down in mid-March to contain a large outbreak. The automotive and farming hub saw a steep contraction in the first quarter, with gross domestic product dropping 7.9% from a year earlier. Industrial output plunged almost 37% in March alone, and production, retail sales and investment all fell in the quarter, according to data from the National Bureau of Statistics. 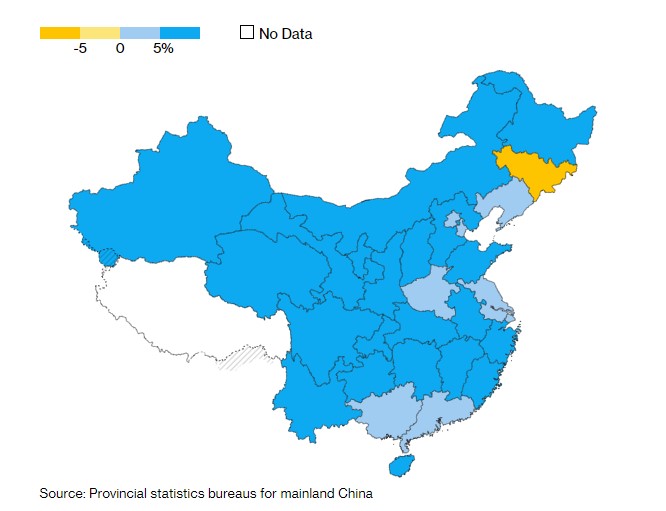 The rest of China already isn’t faring much better. The broader economy started to struggle in March, with retail sales declining again for the first time since mid-2020 as people stayed home, either because they were locked in their homes or were afraid of catching the virus. The profits of foreign firms in China dropped in the first quarter to the lowest level since the Wuhan lockdown in early 2020.

The figures are likely to be worse in the second quarter since most of the damage from lockdowns in Shanghai and Jilin only occurred in April.

The Politburo on Friday pledged to “strengthen infrastructure construction in an all-around way” and to support the housing market. While officials repeated the phrase that “houses are for living in not for speculation,” the government said it would also work to meet the demand for better quality housing and “optimize” the supervision on developers’ income from project pre-sales.

There was also a small shift in language on internet platform businesses, a sign of possible easing of a regulatory crackdown on the industry. That helped to drive the Hang Seng Tech Index up as much as 11%.

Beijing has put difficult economic reforms — such as slowing debt growth and curbing income inequality — largely on hold this year as it focuses on growth ahead of a Communist Party Congress this fall. The Politburo also showed concern about the recent rout in financial markets, saying the government would facilitate initial public offerings and maintain the stable operation of capital markets.

While Xi may want to “buy some time” to cushion the economy, Beijing’s measures are far from enough to ensure a solid rally from here due to the external environment, Kenny Wen, strategist at Everbright Sun Hung Kai Co., said by phone.

“We still have war, rising rates and the Covid,” he said, “which Beijing can’t control.”

Biden’s Asia tour: US deepening its commitments to counter…