Shortly after President Xi Jinping took power in 2012, he outlined his “Chinese Dream” for national rejuvenation. A decade later, he’s entering his most challenging period yet for turning that vision into reality.

The Chinese leader emerged from the Communist Party’s secretive summer retreat on the Yellow Sea this week facing mounting problems at home and abroad. Xi has just a few months to make sure they don’t overshadow his greatest achievement yet: securing a precedent-breaking third term as leader at a party congress later this year.

With economic growth forecasts being slashed, Covid cases rising to a three-month high and the US pushing back over Taiwan, each week seems to bring a new crisis. That’s left Xi focused on reining-in risks and trying to project stability, rather than promoting his achievements and marching toward a coronation.

A property rescue fund, efforts to streamline Covid Zero with production bubbles and more subsidies to keep firms afloat despite a lack of sales show the government’s efforts to prevent the situation from worsening, said Craig Botham, chief China economist at Pantheon Macroeconomics.

“There will be pressure to keep the situation from boiling over,” he said. “Stability is the goal, really, as it helps the party maintain power.”

A surprise rate cut by the People’s Bank of China and reports that local governments may be allowed to sell 1.55 trillion yuan ($228 billion) of bonds signal growing concern among policy makers. The latest economic data suggest a collapse in confidence among Chinese businesses and households, and a reduced appetite to borrow. 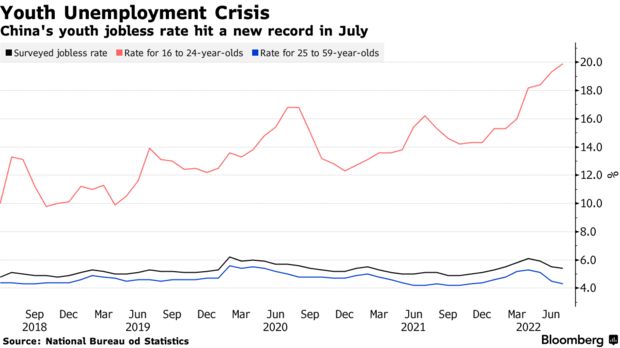 Xi struck a firm tone during a tour through the northeastern province of Liaoning this week, emphasizing the need to follow the government’s orders to maintain stability, pandemic controls and economic and social development ahead of the party congress, the official Xinhua News Agency reported Thursday. He also called on local authorities to relieve severe drought that poses another risk to economic growth.

China “must insist on self-reliance, and make the development of the country and the people the basis of our strength, and firmly take the initiative of our development,” he said.

The party could announce as soon as this month the dates for its twice-a-decade reshuffle, which it has previously said would be held in the second half of the year. While Xi faces no visible opposition to remain as leader for the foreseeable future, perceived weakness could influence key personnel decisions or signals about possible successors.

China’s leadership has so far ruled out a repeat of past stimulus efforts that exacerbated the country’s debt problems. And Xi has only reaffirmed the need to maintain a zero-tolerance approach to the pandemic, which requires authorities to shut down businesses and lock down residents when major outbreaks occur.

Major investment banks including Goldman Sachs Group Inc. have cut their growth estimates for China for the year to 3%, far below the government’s original target of around 5.5%.

“It’s a tricky situation,” Goldman Sachs’ chief China economist Hui Shan said in a Bloomberg TV interview Thursday, citing China’s low immunity and elderly vaccination rate as an obstacle to reopening. “When you breakdown the headwinds in the economy one by one, there are limits to what the government can or will do.”

The tropical resort haven of Hainan on the South China Sea has been shut down for almost two weeks, leaving some 150,000 tourists stranded. In Tibet, hundreds of vehicles were stuck in a traffic jam as visitors trying to flee the Covid hotspot were denied entry into the neighboring province of Yunnan.

That’s adding to the risk of rising social unrest as people adapt to the reality of living in a seemingly endless cycle of lockdowns, weak job prospects and falling home prices. About 15 million young people are estimated to be jobless in China, just as a record number of college and vocational school graduates enter the job market this summer.

Authorities are already grappling with protests across more than 100 cities from homebuyers angry about delays in apartments they purchased. Once a core aspiration for the middle class, even home ownership is no longer a surefire way of bolstering personal wealth, with prices falling for an 11th month in July. 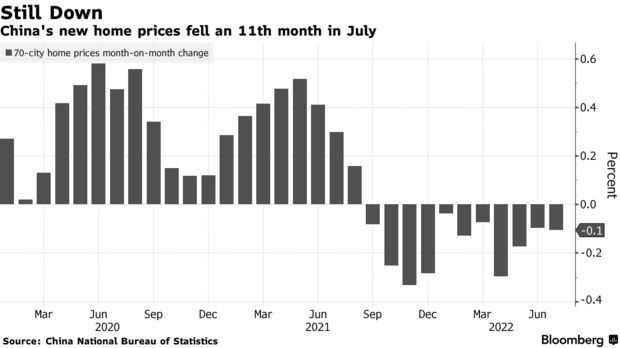 It’s a difficult backdrop for Xi to make the argument that China is on pace to achieve his dream of becoming “prosperous, strong, democratic, culturally advanced and harmonious” by the 100th anniversary of the People’s Republic in 2049. Only last year, the president declared victory in building a “moderately prosperous society in all respects.”

Xi is also facing a test of strength from the US over Taiwan, long seen as the most explosive issue between the world’s biggest economies. US House Speaker Nancy Pelosi’s trip to the democratically governed island came as Xi huddled with party elders earlier this month, prompting China’s military to hold drills around the island, including likely firing missiles over Taipei.

“The prognosis for US-China relations is darkening,” said Ali Wyne, a senior analyst at the Eurasia Group Ltd. “If Xi continues to assess that the United States is in terminal decline and that China will succeed in achieving ever-greater economic and technological self-reliance, he will be unlikely to recalibrate China’s foreign policy substantially.”

The deepening divide with the US and its allies matters at home, too. Bellicose responses by nationalists on social media expressing disappointment with China’s initial response to Pelosi show just how carefully he needs to manage the growing nationalism.

Beijing’s crises at home and abroad cut at the party’s core promise to establish China’s prowess on the global stage and restore prosperity to its citizens.

Lots of “firefighting” is needed to restore stability, said Botham from Pantheon Macroeconomics. He added that it conjures up an image of a swan: “calm and serene above water, but paddling like hell below the surface.”