As of October, the US was importing Chinese goods at an annual rate of $600 billion, a 60% increase from the pre-Covid-19 level of October 2018. It is odd to speak of a Cold War between the US and China when the American industrial economy is massively dependent on Chinese imports.

Trade between the countries is so extensive that it has a major influence on the US price level.

Yellen told Reuters on October 31: “Our trade representative has said that we would consider additional tariffs reductions. We want to see China meet their commitments they made under Phase 1, but stabilizing and perhaps eventually lowering some tariffs in a reciprocal way could be a desirable outcome.”

The Chinese newspaper noted that “senior economic officials from both sides are also attending, suggesting that trade and economic topics will likely be covered at the closely-watched meeting.

Chinese Vice-Premier Liu He, also the chief of the Chinese side of the China-US comprehensive economic dialogue, is among the attendees of the meeting … On the US side, US Treasury Secretary Janet Yellen are among the officials attending the meeting, according to online pictures.”

Global Times noted “softening rhetoric from Washington over possible removal of punitive tariffs on some Chinese goods and skyrocketing inflation in the US that has left its consumers and businesses weeping.”

It quoted a Chinese expert’s view that “stable prices in China’s exports could be critical for the US to maintain its inflation rate at a certain level. Analysts said that this could be one of the key reasons why Washington has been sending positive signals to create a good atmosphere for the meeting.”

Not only the US tariffs introduced by former President Donald Trump in 2018, but the appreciation of China’s currency have pushed up the cost of Chinese imports in the US. US imports from China amount to nearly 30% of America’s manufacturing GDP.

The chart below shows the index of US import prices from China (not counting the effect of tariffs) against the RMB/USD exchange rate. As the dollar fell against the RMB during the past two years, Chinese import prices reversed a long decline and rose in tandem with the currency. 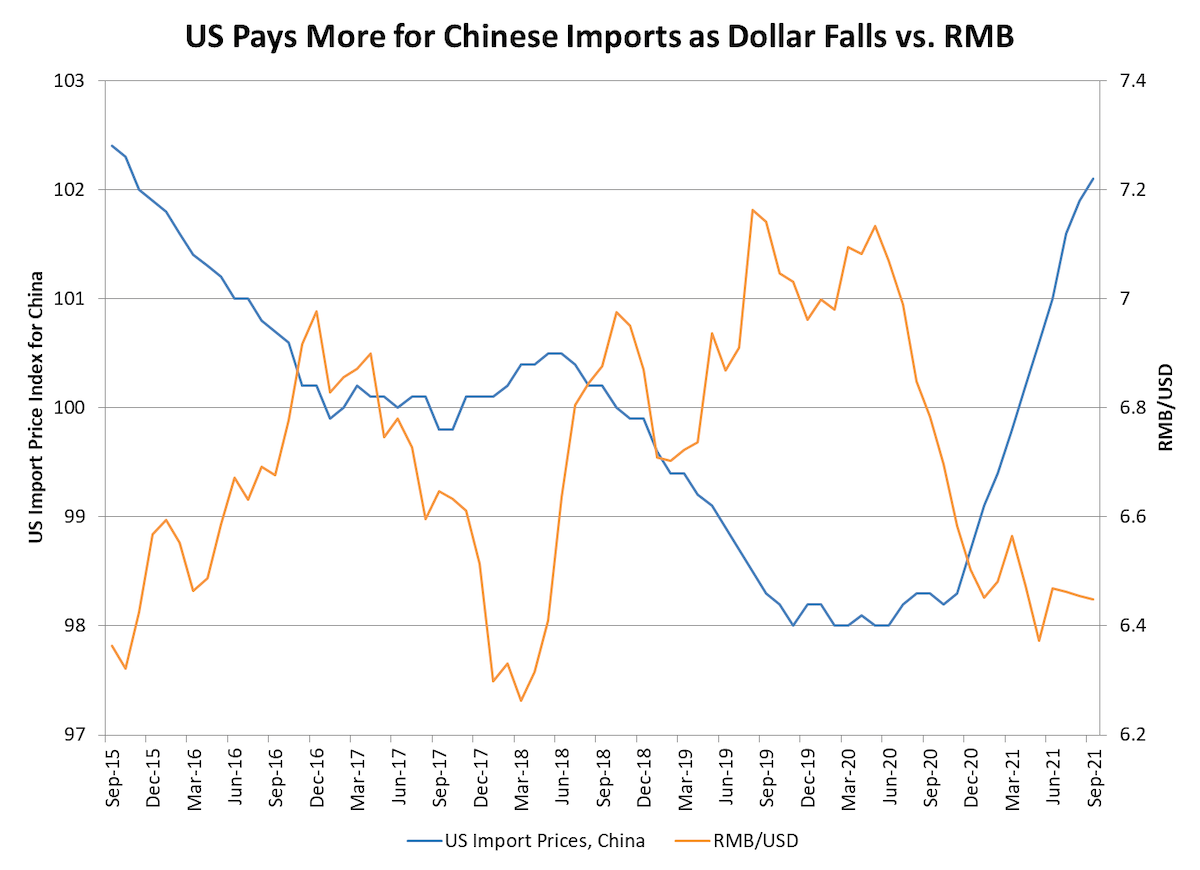 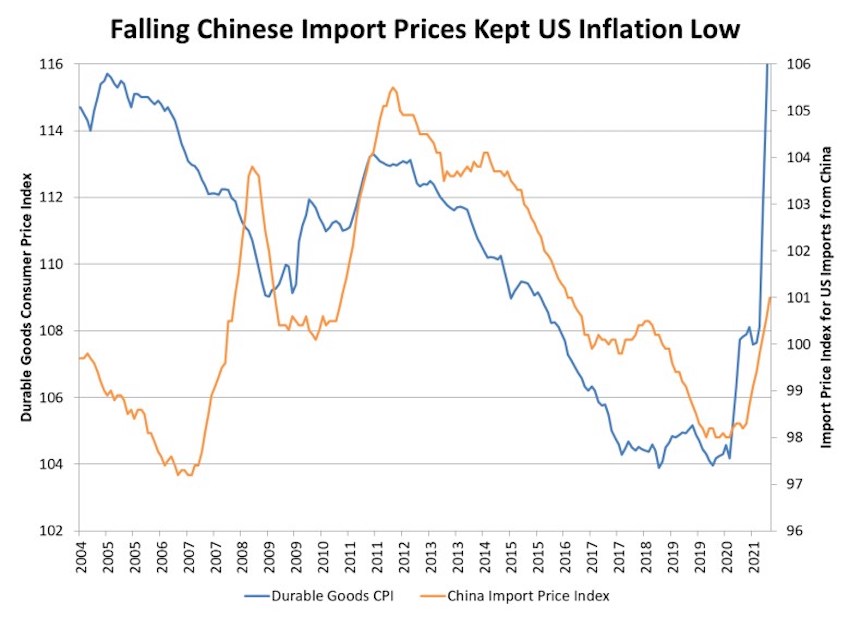 Expected inflation at a 5- or 10-year horizon as measured by the Treasury market now stands at the highest level since inflation-protected securities were introduced more than 20 years ago.

The RMB has risen steadily over the past year and a half as US inflation expectations have ballooned. The scatter chart below of US expected inflation versus the RMB exchange rate describes a familiar S-curve. 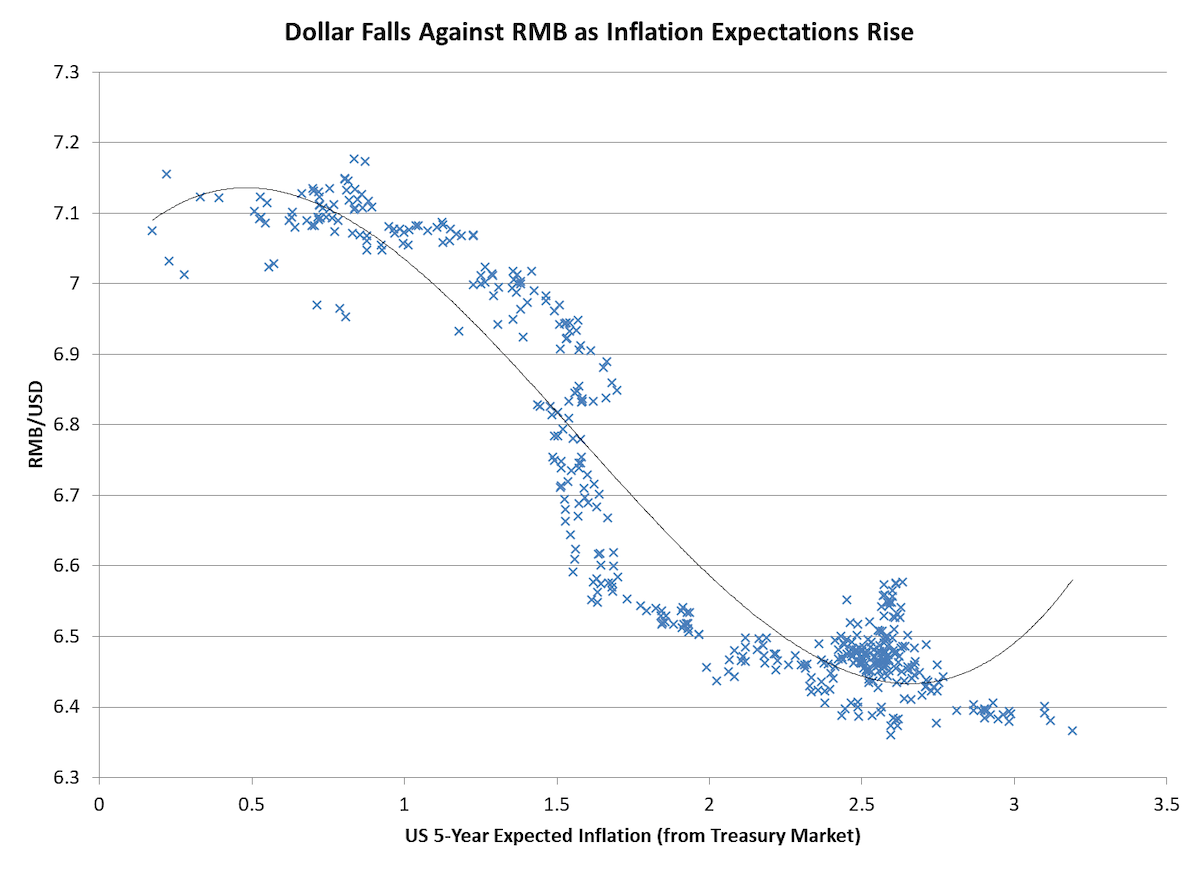 For years, the United States complained that China kept its currency too cheap, the better to sell goods to the United States. Now the problem isn’t that China’s goods are too cheap; the US is addicted to imports from China and lacks the productive capacity to replace them.

America’s problem is that a rising RMB increases the cost of goods that it can’t get anywhere except China.

That gives China considerable leverage with the Biden administration, which is struggling with a wave of popular anger about inflation.

One possible deal that Beijing and Washington might consider would involve a rollback of US tariffs and a commitment by China to halt the RMB’s rise, that is, a de facto easing of Chinese monetary policy to support the dollar.
Author: DAVID P. GOLDMAN, Asia Times