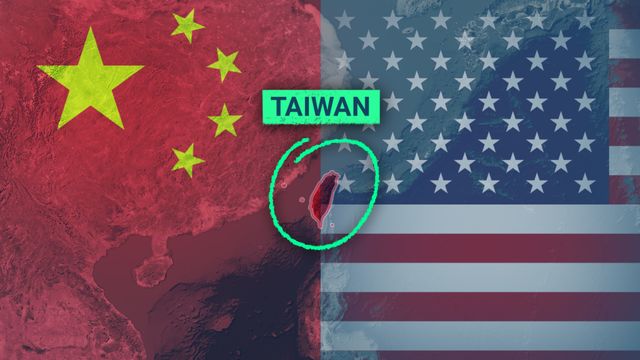 Wealthy, democratic and strategically located off the Chinese coast, Taiwan has long been the most volatile issue between the US and China. Both sides have avoided serious conflict by leaving unsettled the question of who actually owns the island. But it’s becoming harder to avoid as China’s military ratchets up exercises near what President Xi Jinping views as his country’s lost territory. Standing in the way are the US Pacific Fleet and Taiwanese voters, who emphatically rejected closer ties with Beijing in two straight elections. The tensions are raising the stakes for US President Joe Biden’s efforts to manage a growing superpower rivalry with China.

1. Why is Taiwan so important?

Empires have jockeyed over Taiwan for centuries, with occupations by the Spanish, Dutch and China’s Qing Dynasty. The Qing’s loss of Taiwan to the Japanese after a humiliating military defeat in 1895 made “reunification” a rallying cry for generations of Chinese, including Xi’s. To the US and Japan, Taiwan is a vital stronghold in a string of archipelagos that they rely on to contain China and safeguard trade routes. Taiwan has thrived under American protection to become a critical supplier of semiconductors and other high-tech goods. Today, the island of 23.5 million people is also among Asia’s most vibrant democracies, a rejoinder to Communist Party arguments that Western political structures are incompatible with Chinese culture.

2. Why is the island in dispute?

The fight dates to the end of the Chinese Civil War in 1949, when Chiang Kai-shek — leader of the Nationalist Party that ruled China after the overthrow of the Qing dynasty in 1912 — abandoned the mainland to Mao Zedong’s Communists. The US backed Chiang as China’s rightful leader until then-President Richard Nixon sought to establish ties with Beijing in the 1970s. The result was the “One China policy,” in which Washington recognized the People’s Republic as the “sole legal government of China,” without clarifying its position on Taiwan’s sovereignty. China agreed to tolerate informal US relations with Taipei, including arms sales under certain conditions, but has since affirmed the right to take Taiwan by force to prevent its independence.

3. Why are tensions rising again?

Since taking office, Biden has repeatedly used language about Taiwan that appeared to change that US policy, although the White House has insisted it remains unchanged. In May, Biden answered “yes” when asked whether the US would be willing to get involved militarily to defend Taiwan, and compared any move to take the island by force to Russia’s invasion of Ukraine. White House officials said that Biden meant the US would provide military equipment to Taiwan, not send troops. His words came days after China’s top diplomat had warned the US that increased support for Taiwan would lead to a “dangerous situation,” a point Xi made in a call with Biden last year. In Taiwan itself, President Tsai Ing-wen of the Democratic Progressive Party, which was founded on the promise of independence, was comfortably re-elected in 2020. Beijing has responded by cutting off communication, curbing travel, resuming efforts to lure away Taiwan’s few remaining diplomatic partners and pressing multinationals to revise policies that treat Taiwan as a country. Chinese forces also have stepped up naval and air exercises near the island, and continues to send military planes into Taiwan’s air defense identification zone.

4. Where could the dispute lead?

A US-China clash over Taiwan has re-emerged as one of the world’s biggest geopolitical risks, according to defense analysts. While the two nuclear-armed powers have plenty of incentives to avoid war, China’s rapid military rise has raised the risk of miscalculation. It fired “carrier killer” missiles into the South China Sea in August 2020, in an apparent warning that its military could threaten the ships Washington has long relied on to project power. One Chinese diplomat said in 2017 that a visit by an American warship could be grounds for an attack.

Chinese and U.S. Forces Could Clash Over Taiwan 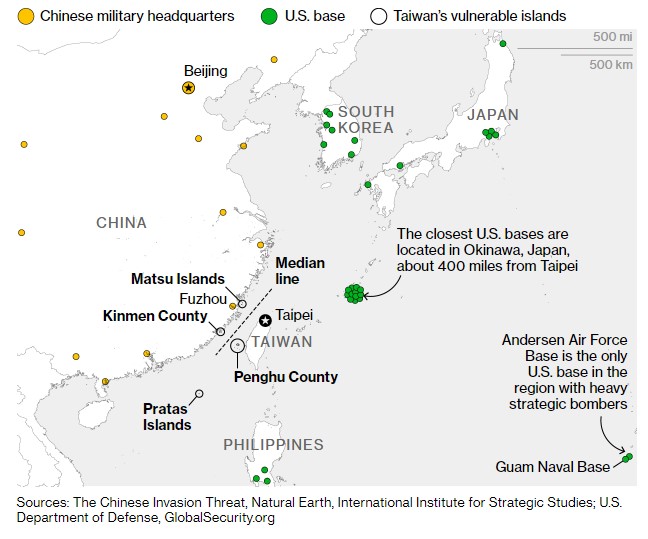 5. How has the US responded?

Biden’s predecessor, Donald Trump, oversaw a dramatic expansion of ties with the government in Taipei, including the first fighter jet sale in three decades. The Biden administration has sought to maintain that shift, criticizing what it says are China’s “aggressive actions” in the Taiwan Strait. It has held trade talks with Taipei, approved arms sales and conducted naval drills in nearby waters. Still, Biden said he and Xi in a September 2021 phone call discussed the need to abide by existing agreements on the issue.

6. What does China want?

Although the Communist Party has never ruled Taiwan, it views control over the island as essential to completing its goal of reversing China’s “century of humiliation” by colonial powers. Xi has shown an increased willingness to assert such sovereignty claims from the South China Sea to the Himalayan Plateau and Hong Kong, where China has cracked down on opposition and imposed strict security laws following pro-democracy protests. Polls reveal a steadily rising share of Taiwanese in favor of independence — the thing that’s most likely to provoke a military move by China on the island. Almost one-third of the population supports immediate or eventual independence, according to a September 2021 survey. Those in favor of unification with the mainland fell to less than 10%.

Is China ‘Uninvestable’ and What Does That Even Mean?