Beijing Jingcheng Machinery Electric, a state-owned manufacturer of gas storage cylinders, may not be the most well-known name among Chinese listed companies. However, it is notable in one way: it tops the list of companies with the biggest price gap between their Hong Kong and mainland listed shares.

The company is listed both in Shanghai and Hong Kong. The A-shares on the mainland closed at 22.1 yuan on Friday, while the H-shares in Hong Kong were at 4.11 Hong Kong dollars, meaning mainland investors were paying 6.6 times as much.

Both shares have same voting rights and dividend, but the prices are wildly divergent — and the phenomenon is not unique to Beijing Jingcheng.

There are over 140 mainland Chinese companies with shares dually listed in Hong Kong and either in Shanghai or Shenzhen. All but one have more expensive A-shares and cheaper H-shares, ranging from China Eastern Airlines and developer China Vanke, to tech company ZTE and manufacturer BYD, in which U.S. investor Warren Buffett owns the cheaper ones. China Merchants Bank is the only company with cheaper A-shares.

The sharp sell-off in Chinese stocks earlier this month widened the differential, at one point to the greatest in almost seven years. And it has encouraged at least some companies to consider share buybacks in Hong Kong, where they can snap up stock cheaply to boost their earnings per share.

“While the companies are the same, the reality is, there has been, and remains two very different pools of capital playing these names,” said Fraser Howie, market analyst and co-author of “Red Capitalism: The Fragile Financial Foundation of China’s Extraordinary Rise.”

While about 80% of equity transactions in mainland China are executed by domestic retail investors, Hong Kong is an international market free from capital controls, and so reflects the views of a much wider range of global investors. Beijing restricts cross-border securities trading and its currency is not freely convertible, so arbitrage between onshore and offshore shares is difficult.

“Capital controls means that the true arbitrage of buying in the cheap market and selling that cheap bought stock in the expensive market does not exist,” Howie said. 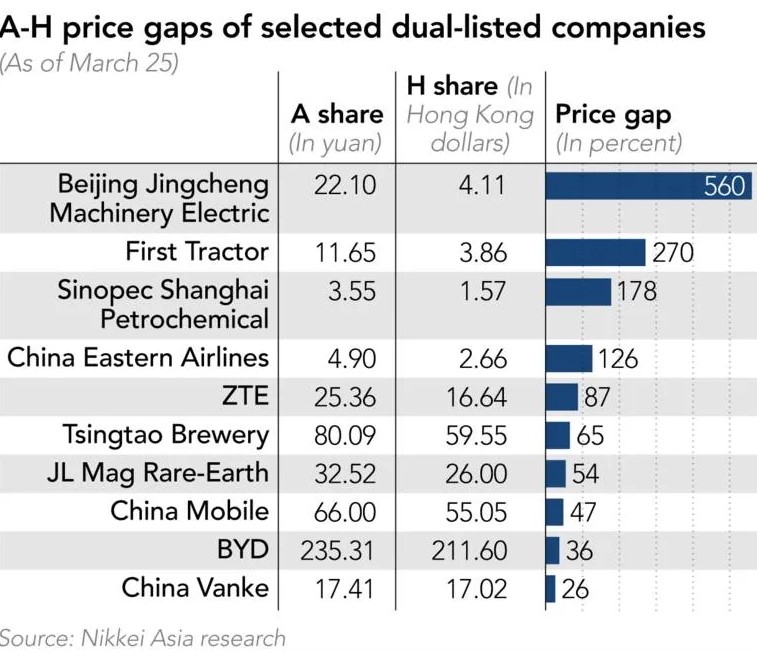 Hang Seng Indexes Company, the vendor quoting Hong Kong’s benchmark index, has an indicator that specifically tracks the price differential of 97 dual-listed companies. Since the start of the data in January 2006, there have been brief periods where the index dipped below 100, meaning A-shares traded at a discount to H-shares, but mainland shares have predominantly been more highly valued — as its name, the AH Premium Index, suggests.

The index spiked up to 153.88 on March 15, when both mainland and Hong Kong equity markets were hit by what Kai Kong Chay, senior portfolio manager of greater China equities at Manulife Investment Management, called a “perfect storm.” Geopolitical tensions caused by Russian aggression against Ukraine combined with a surge in infections and subsequent lockdowns in major mainland cities under Beijing’s “zero COVID” policy, at the same time as there was renewed regulatory pressure on Chinese companies from Washington. Global investors took a “risk-off” attitude toward Chinese equities, until Beijing sent a signal that it was going to adopt pro-market policies and markets rallied.

The last time the AH Premium Index was so high was in 2015, when the mainland equity market crashed, leading over 1,400 companies to self-suspend trading. The all-time high was 213.47 on Jan. 22, 2008, similarly during a market collapse. 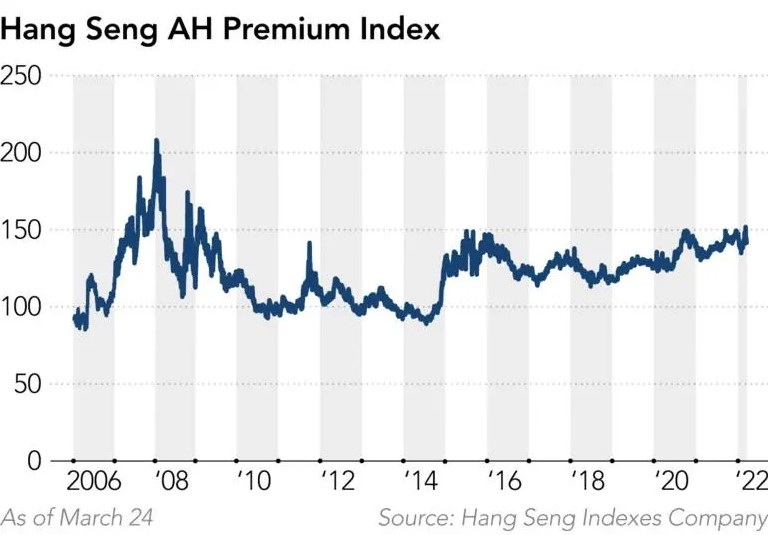 A paper co-authored by three scholars from business schools of New York University and University of Pennsylvania two years ago suggests the A-H premium “is higher for stocks with higher A-share volatility and at times when the A-share market is more volatile.” The difference in composition of the two markets seems to come into play under these circumstances, as Hong Kong investors have more choices in other global markets, especially during the time of turbulence.

The paper by NYU Stern’s Jennifer Carpenter and Robert Whitelaw and U Penn Wharton’s Dongchen Zou also pointed to “significant home bias” by investors adding to upward pressure on A-shares, on top of limited arbitrage opportunities and barriers to convergence.

The Qualified Foreign Institutional Investor (QFII) system was introduced in 2003, granting quotas to selected international investors allowing them to trade A-shares and other yuan-denominated financial assets, starting with UBS and Nomura. By 2019, all quotas were abolished.

Meanwhile, the stock connect program between the Hong Kong and Shanghai exchanges opened in 2014, allowing designated shares on both sides to be traded freely within certain ceilings. The program was extended to Shenzhen two years later. The two-way transactions during the first two months of this year reached 4.79 trillion yuan ($753 billion).

While academics grapple with the reasons for the persistent differential, companies and investors take the price gap for granted. 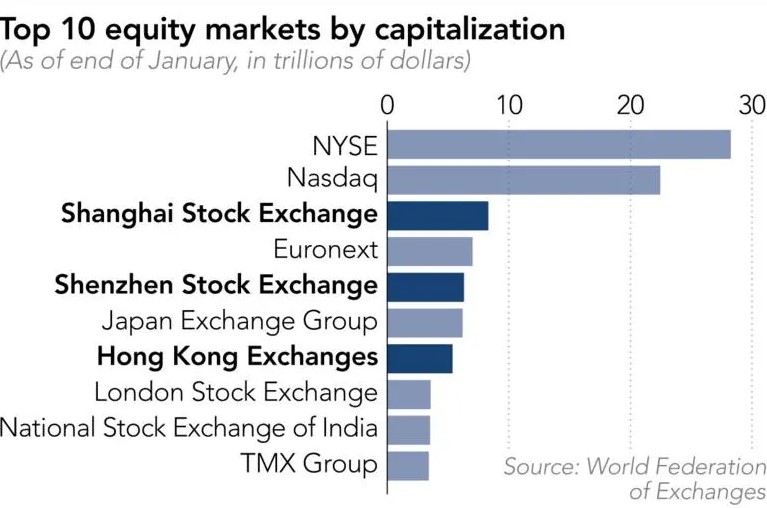 When China Mobile joined the ranks of dual-listed shares by listing in Shanghai in January, after being kicked off the New York Stock Exchange last year, it took advantage by issuing shares at 57.58 yuan, a 52% premium to its Hong Kong shares. The company’s net proceeds were 51.4 billion yuan, making it the largest mainland new listing in a decade.

JL Mag Rare-Earth, provider of precious magnets for electric vehicles, went the other way in January by listing in Hong Kong at a significant discount to its existing Shenzhen shares. For Cai Baogui, its co-founder and chairman, this was still worth it since a Hong Kong debut gained the company international exposure as it expands the business further beyond its home base.

The price gap is recognized as a major issue for some companies. “The price difference between our H-shares and A-shares is very large,” Wu Haijun, chairman of Sinopec Shanghai Petrochemical, said during its online earnings call on Thursday. The company, a listed unit of the state-owned oil conglomerate Sinopec, had an A-share premium of 177% as of Friday.

Wu was responding to a question on the company’s proposal to buy back up to 10% of both its A- and H-shares, suggesting to some it could place more emphasis on the Hong Kong shares. “We hope this kind of buyback could help better reflect our performance to our stock prices,” he said.

China Mobile last month kicked off a substantial buyback program focusing on its H-shares. It is buying up to 9.6% of its outstanding stock, or a total of around HK$110 billion ($14.1 billion) at the time it commenced. That means it intends to spend all the money it raised in Shanghai and more to buy back cheaper stock in Hong Kong — a rare exploitation of an arbitrage opportunity.

“The premium will ebb and flow, as long as these capital controls remain,” said Howie. While the A-H premium may narrow for some companies, “supply and demand, sentiment, and momentum in two distinct markets drives the prices.”