But, as they say in football, it has been a game of two halves. The Shanghai and Hong Kong stock markets have seen a relatively derisory rise of 45 and 22 per cent respectively, making them among the few markets not to exceed their pre-Covid-19 highs.

The bold moves elsewhere are driven by a reported US$17 trillion of liquidity in spender’s pockets, and the continuing promise of ultra-low interest rates. It is unsurprising that wealth management clients are borrowing more than ever – a recipe for inflating prices.

It means that investing today is like flying in an plane in the 1950s – long periods of intense boredom separated by short periods of sheer terror. The chart below shows the Vix index, sometimes described as the “fear index” as it measures the market’s expectations of the relative strength of near-term price changes of the S&P 500 index.

The chart shows the Vix from the beginning of 2020; the volatility surge in February of last year, as the market collapsed on the initial Covid-19 fears, is obvious.

Since then, the index has broadly declined to a low of 17, which is even below its 30-year average of 19.5. More important is to notice the periodic spikes when volatility leaps during periods of market distress. 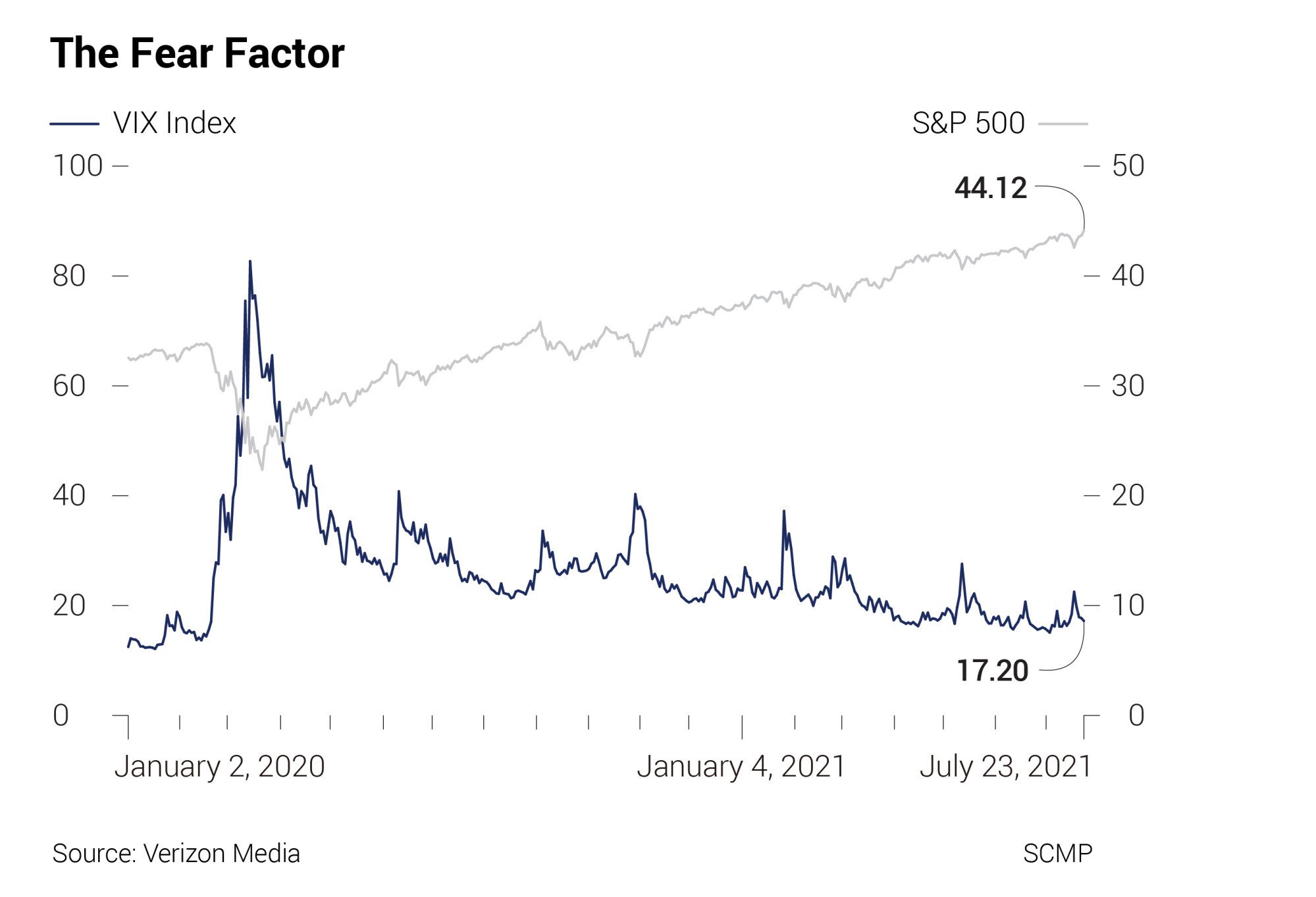 These are times when the elephants in the room – money printing, global polarisation, inflation, the US Federal Reserve and sluggish growth – raise their bearish heads (if I am allowed to mix my menagerie).

These factors periodically shock the markets, even as the overall volatility of the market has declined. The European and the Hong Kong versions of the Vix follow a similar pattern of temporary spikes – this week, Hong Kong unsurprisingly displayed a big spike of its own.

Markets favour a steady state, where prices stay on trend for much longer that we analysts like to forecast, as demonstrated by the periods of stability between the spikes. This indicates that – Greater China aside – the crawling climb of the market to higher levels will probably continue, interspersed by times of doubt when prices come off sharply.

It is no secret that these steady periods usually end with a major shock – an “unknown unknown” that will arise, for instance, if the market suddenly fears that the Fed can no longer control rising inflation.

Those physicists who have ventured into finance, such as Benoit Mandelbrot and Didier Sornette, tend to have the best handle on this kind of critical market situation, which can be compared to the phase changes of ice turning into water and then into steam.

Physicists are more comfortable than financiers with the concepts of power relationships, “fat tails” and “black swans” – which look at the likelihood of unexpected events – and “dragon kings”, which study normal events that become abnormal.

Physicists can often tell us when the market is looking critical by using mathematical formulas and modelling – but even they don’t have a strong track record of predicting exactly when that steady state is going to break down.

At present, markets look reasonably stable. The “Fed pivot” was well timed, in terms of flagging rising interest rates in advance and, in any case, the estimates by the rate-setting members of the Fed are still a long way off – with the first rises in 2023 or 2024.

Even the clear and present decline in US-China relations is unlikely to knock the recovery off course. The political world will continue to be polarised – yet, paradoxically, the economic world will part much less.

Trade between China and the West at the grass-roots level will continue apace as they both need each other, even as relations worsen. Trade is critical to all sides, even if there is significant disruption. Supply chains will adjust. That row is pretty well discounted by the markets already.

As economies adapt, there are considerable differences within those broad observations. It was a shock to walk down Holborn in Central London this week where I used to walk 40 years ago to the London School of Economics.

The long rows of shops with familiar names now dark and shuttered are a clear demonstration of the disruption of Main Street by e-commerce. So, too, are the swathes of British farmland now growing houses or monstrous facilitation sheds for the new breed of online retailers.

Retail and residential are moving from the city to the country alike – not helped by old-time planners banning traffic from city centres. Covid-19 has accelerated and amplified existing trends, causing both recession and growth even within the same economies.

Minor victories in the battle between the two will continue to cause both stability and periodic volatility in markets that will persist until we have the kind of phase change familiar to physicists. For now, we are likely to experience the 1950s flying experience for some time yet.

Richard Harris is chief executive of Port Shelter Investment and is a veteran investment manager, banker, writer and broadcaster, and financial expert witness