After years of breakneck growth that catapulted Chinese tech firms into stock market giants, a number of strategists are coming to terms with the new reality of a sector beset by slower expansion and lower earnings.

Morgan Stanley has lowered target prices for tech firms including Alibaba Group Holding Ltd. and Tencent Holdings Ltd., while China International Capital Corp. said this week it assumes zero valuation for some tech investments in 2022. JPMorgan Chase & Co. slashed its target prices across China tech last month, some by more than a half, after changing their valuation model.

The simmering changes in models and thinking are a reflection of the challenging environment facing the industry, as regulatory risks and Covid-19 disruptions make it increasingly difficult to determine fair value. It’s a new normal that the firms themselves are embracing. After reporting the slowest pace of quarterly growth on record, Tencent acknowledged a “new industry paradigm” where reckless growth is no longer feasible.

“We are hearing a common theme from key players in the Chinese internet sector of shifting to a more prudent strategy when it comes to investing in new growth areas and pulling back to focus closer to the core business,” said Ramiz Chelat, portfolio manager at Vontobel Asset Management. “We are more constructive on companies that have already displayed investment discipline,” than those that are intending to, Chelat added. 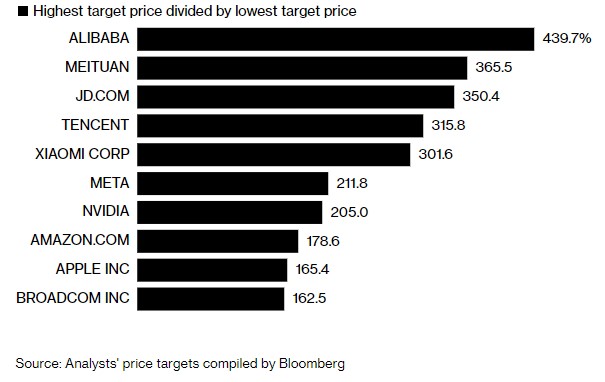 The Hang Seng Tech Index, which tracks some of China’s biggest tech firms, recorded a fifth straight quarterly loss, shedding almost 20% in the three months through March. Their peers trading on American exchanges fell by a similar extent.

The losses came despite a mid-March pledge by the Chinese government to stabilize markets and end more than a yearlong crackdown on private enterprise. Limited progress in negotiations between Beijing and Washington over auditing China firms is also a concern, raising the risk of delisting from U.S. exchanges.

On Friday, Bloomberg reported that in what would be a rare concession, Chinese authorities were preparing to give U.S. regulators full access to auditing reports of the majority of the 200-plus companies listed in New York as soon as mid-this year. 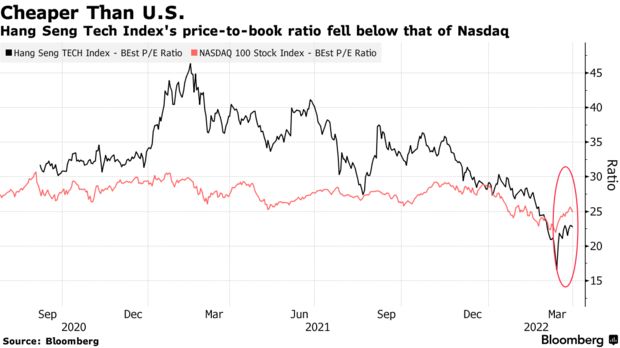 To be sure, a majority of analysts still hold aggressive 12-month targets based on longer-term optimism and as prices remain far below a February 2021 peak. Only two of the 63 analysts tracked by Bloomberg rated delivery behemoth Meituan a sell, while its average target price is 52% higher than its last trading level.

The vast divergence in target prices for tech stems from different valuation approaches.

Under what’s called the sum-of-the-parts (SOTP) method, which adds up the market value of various business units, Morgan Stanley says it would put Alibaba’s U.S. stock price target at $360, their earlier bull case. That figure has now been trimmed to $220 when backing out the value of non-core business, such as Taobao Deals.

A more prudent and preferred methodology for the brokerage is using a discounted cash flow method (DCF), which values the stock at $140. On Thursday, its U.S. shares closed at $108.80.

“Right now, the price targets we are having across the board are very easy to achieve in the DCF model by giving it a discount because we sit at so much risk associated,” said Manuel Muehl, analyst at DZ Bank AG, who is one of the three analysts rating Tencent a sell. He called it “unrealistic” for bullish analysts to avoid pricing in political risks.

JPMorgan switched to adopt price-to-earnings multiples, which focuses more on earnings growth and compares with industry peers, from SOTP methods in assessing most tech giants as they cited a “regime shift.”

“While shares of these Chinese tech firms may be bottoming out, we are not seeing any new growth catalysts,” said Andy Wong, fund manager at LW Asset Management Advisors Ltd. in Hong Kong, whose fund trimmed down their China exposure last July. “What we have been waiting to see are changes in business models to work with the regulatory new normal, but we don’t see much in sight.”