As President Xi Jinping marches toward his second decade in power, predictions abound that he’ll ease policies that have sealed China’s borders, battered stocks and blown up the dollar-bond market. There’s little sign any such shift is in the works.

The optimism hinges on expectations Xi will usher in a more benign investing environment after the twice-a-decade Communist Party congress slated to start Oct. 16. The idea is policymakers will take bolder steps to shore up the economy once Xi locks in a precedent-breaking third term and packs key posts with loyalists.

Wall Street banks are looking for stronger coordination across departments that set policy, making it easier to align investment. Some predict Xi will start to pivot away from his Covid Zero orthodoxy. Others say the government will do more to ensure the property-market crisis doesn’t threaten the banking system.

“There is a lot of wishful thinking that after the party congress is out of the way and Xi secures a third term, China will become pragmatic again and refocus on economic growth,” said Karine Hirn, partner and founder at East Capital Asset Management. “This is unlikely. The data isn’t actually horrible enough for a rethink.”

This year’s congress comes at a time of greater domestic uncertainty for China than any such gathering since the aftermath of the Tiananmen Square crackdown in 1989. Economists are predicting the slowest annual growth in more than four decades, as pandemic measures continue to roil the nation. The yuan sank to a 14-year low last month, while government efforts to rein in debt have triggered a property crisis.

Even with all that pain, China is still far from facing a systemic crisis that threatens the stability of its banking system, for example.

Xi politically looks as strong as ever. While Beijing’s simultaneous edicts for local governments to both maintain growth and lock down over every virus outbreak have prompted complaints about mixed messages, there’s little indication these have translated into internal opposition. Sporadic protests that have erupted over lockdowns and undelivered homes haven’t evolved into broader political dissent. 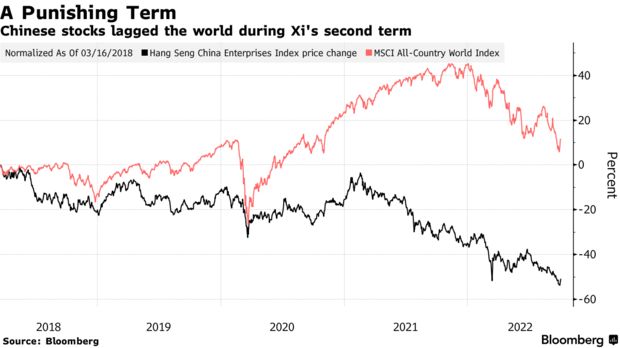 Xi is expected to use the upcoming congress to further consolidate control over the party’s 25-member Politburo, after filling several seats with allies five years ago. Key policies that have battered tech giants such as Tencent Holdings Ltd. and made China’s stocks the worst performers in the world over Xi’s second term are likely to gain emphasis in documents produced by the congress.

“If anything, Xi is likely to renew the party’s focus on regulatory agendas such as ‘common prosperity’ at the upcoming congress,” said Neil Thomas, China analyst with the Eurasia Group Ltd. Xi has already shifted the party to focus on the quality, rather than quantity, of growth and is unlikely to pivot on key policies as he tightens his grip on the party, he added.

Investors are still reckoning with the fallout. Xi’s heavy hand in everything from tutoring firms to bad-debt managers and China Evergrande Group sent repeated shock waves across Chinese markets in the past two years, saddling funds with losses when virtually everything else in the world was rallying. An index tracking the Chinese junk dollar bond market, dominated by the nation’s real estate developers, is down 35% for the year.

Funds outside China were particularly punished. The CSI 300 Index of onshore stocks outperformed the MSCI China Index — the most widely followed China benchmark among international funds — by 24 percentage points since Xi canned Ant Group Co.’s listing in late 2020. Some 87% of this year’s credit defaults occurred offshore, while delinquencies in the much larger yuan-denominated market dropped to their lowest level since records began in 2018. 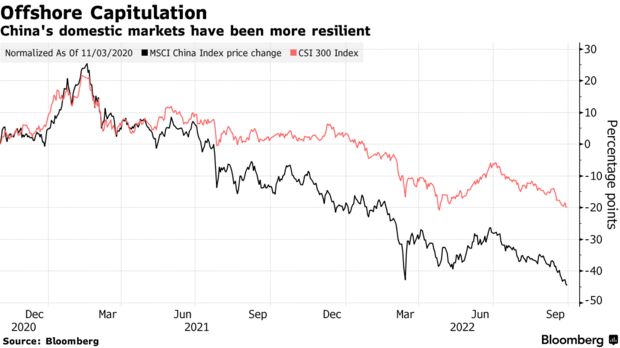 Xi’s government argues the cleanup will help reduce financial risk and create a more sustainable future for China’s economy in the long run. But the damage to investor confidence is adding to jitters in a market already grappling with weakening economic growth and the fallout from the Federal Reserve’s battle against inflation.

Rather than satisfying the whims of international investors, Beijing’s focus is on fortifying its domestic markets. That inward shift is unlikely to reverse as Xi seeks to ringfence the economy against geopolitical shocks and increasingly fraught rivalry with Washington.

“Tensions with the US and the overriding priority of national security are leading to a retreat to the domestic market,” said Chang Shu, chief Asia economist for Bloomberg Economics. “US sanctions on Russia have made China much more cautious about integration. China now needs to balance financial security and financial liberalization.”

Chinese companies are increasingly seeking funding at a local level, with about 90% of this year’s IPO proceeds sold in Shanghai and Shenzhen over Hong Kong or New York, the biggest proportion since 1999, according to data compiled by Bloomberg. Local corporate-bond sales surged ahead of the US for two consecutive months, something that hadn’t ever happened. 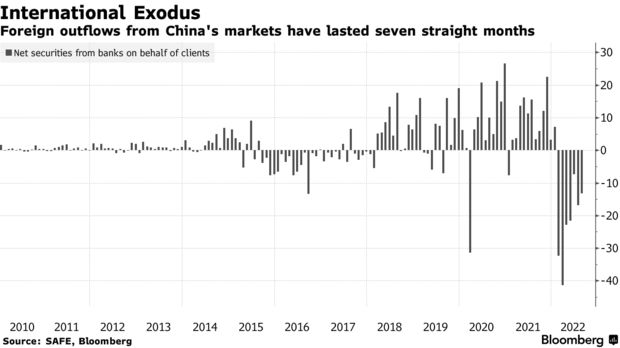 The question is whether attracting overseas capital into mainland markets will remain a priority for the party. Investor confidence has been so damaged during Xi’s second term that Wall Street’s forecasts for a more stabilizing next five years are falling on deaf ears.

“There’s a lot of nervousness and a lot of negativity,” Julia Raiskin, Asia-Pacific head of markets at Citigroup Inc., told Bloomberg TV on Sept. 29. “An even bigger shock to the market would be an upside surprise, something positive out of the 20th Party Congress. I don’t think the market is positioned for that at all.”

Citigroup equity strategists expect a “sharper focus on the economy” that will help reduce uncertainty, according to a September note. Changes in the following months could include more nationwide efforts to stabilize the housing market and a “meaningful” shift in the Covid management strategy that shows China is serious about reopening, the analysts wrote.

The desire to ensure stability is one reason China is holding on to Covid Zero, Bank of America Corp. economist Helen Qiao told Bloomberg TV last month, arguing that incentive will fade after the congress. Xi’s trip to Central Asia last month and reportedly planned forays to Indonesia and Thailand suggest China is pushing for reintegration with the rest of the world, Qiao said.

A “favorable political cycle” is why Goldman Sachs Group Inc.’s equities team remains positive, according to a Sept. 18 note. They highlight the conflicting goals of China’s main policies — monetary, fiscal, property, industry regulation and Covid-related — and say the confirmation of top leadership positions will help reduce them.

Still, it will take a lot to convince global investors to start buying Chinese assets. Paying heed to sell-side enthusiasm for China has proved expensive in the recent past.

“Any expectation that China will go back to what it was is misguided,” Dong Chen, Pictet Wealth Management’s head of Asia macroeconomic research, said by phone from Geneva. “The third term will be all about implementation and a wrap up of the new policies.”