US Commerce Secretary Gina Raimondo said on Sunday that Biden had asked his team to look at the option of lifting some tariffs on China that were put in place during the Trump era.

Raimondo made the comment to CNN in an interview when asked about whether the US government was weighing lifting tariffs on China to ease inflation.

“In the US, tariff decisions are not made by the Department of Commerce, but by the Office of the US Trade Representative (USTR). Why would Biden ask Raimondo to do the tariff removal analysis when USTR Katherine Tai is supposed to do it?” Gao Lingyun, a trade expert at the Chinese Academy of Social Sciences in Beijing, told the Global Times on Monday.

“To cater to businesses that expect tariffs to be removed for the midterm elections, the Biden administration sent some kind of conciliatory signals through [Janet] Yellen and Raimondo,” said Gao.

In May, US Treasury Secretary Yellen voiced support for removing some tariffs on Chinese imports that “aren’t very strategic” but are hurting US consumers and businesses. But Tai preferred to keep them in place to develop a more strategic China trade agenda, Reuters reported, citing a source close to the matter.

Tian Yun, a Beijing-based veteran economist, said that the US has shot itself in the foot as it is using politics to suppress the globalization process it initiated.

“In particular, I think a trade war between the US and major trading partners like China is irrational. It not only affects bilateral trade, but also affects the international supply chain. The US has disrupted the global division of labor and production,” Tian told the Global Times on Monday.

Raimondo also said that some tariffs on steel and aluminum will be kept to “protect US workers and the steel industry,” but said “it may make sense” to lift tariffs on other products, like household goods and bicycles.

Analysts said that such “removals” will offer limited help to counter US inflation, as those products account for only a small part of US consumption and of Chinese exports.

“If the US removes all tariffs on Chinese goods, the improvement in US inflation will be 1-1.3 percent, as estimated by US scholars, while my estimate is around 1.5 percent,” said Gao.

Tian also said that falling prices for household items and bicycles had a relatively small impact on the overall level of US inflation.

“In the US, spending on housing, education and medical care accounted for more than 30 percent of total consumption. In contrast, the consumption of food and beverages and general daily necessities only accounted for a small part,” Tian said on Monday.

Tian noted that steel and aluminum are basic raw materials for production that will transfer the impact of upstream price hikes to the whole industry chain, such as infrastructure. “If the US keeps tariffs on Chinese steel and aluminum products, it will not help US consumer,” he said.

China’s steel and aluminum exports to the US reached $22.1 billion in 2021, accounting for 3.84 percent of its total exports to the US, according to data from the General Administration of Customs of China (GACC).

Tian said that for the US to address its inflation crisis, lifting all additional tariffs on Chinese products is necessary. “The US needs China more than China needs the US right now,” he said. 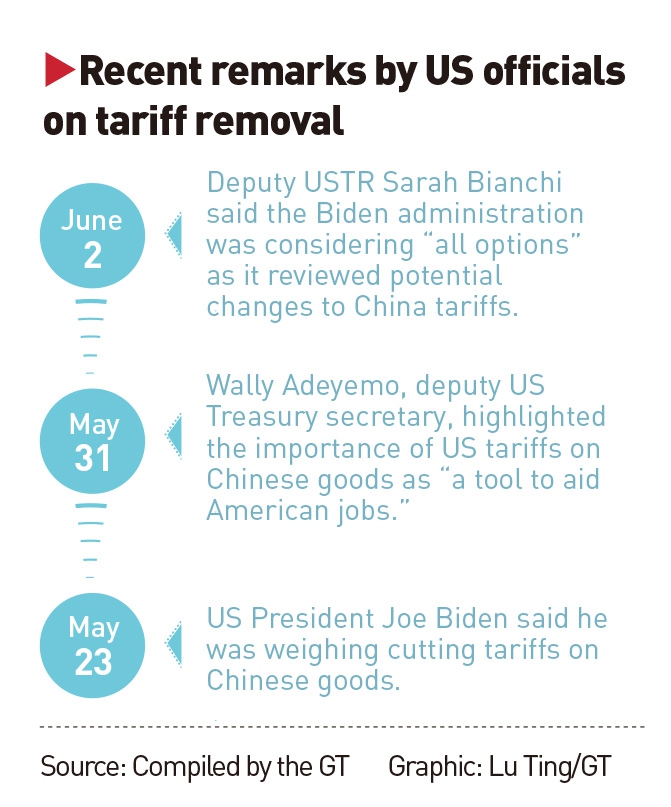