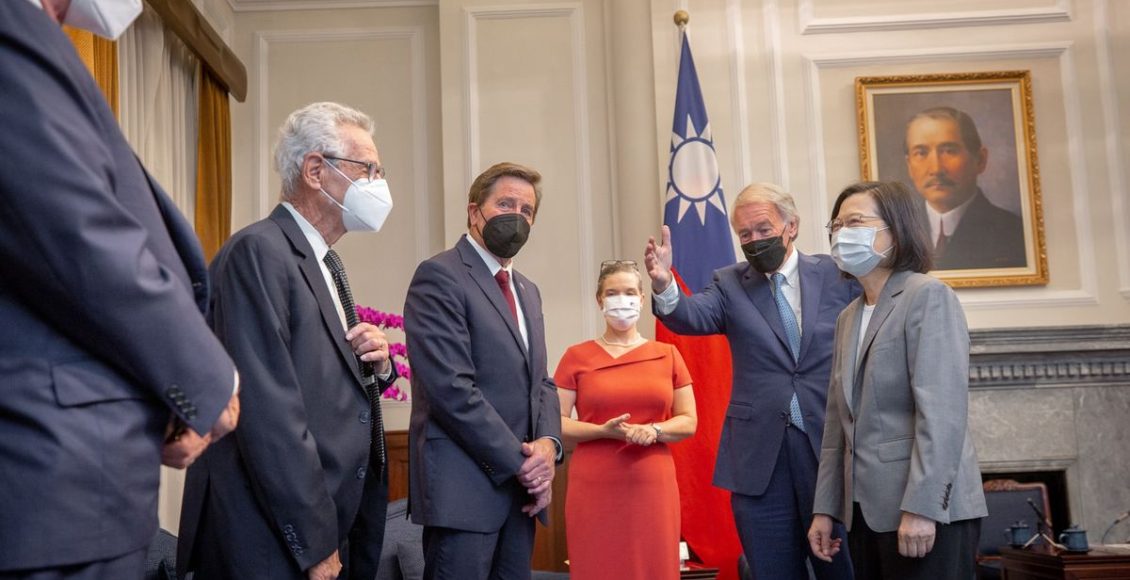 US House Speaker Nancy Pelosi’s Taiwan trip was only the most high-profile in a series of moves by Congress that are forcing President Joe Biden to test Beijing’s red lines — whether he wants to or not.

Pelosi’s visit, the first by a sitting speaker in a quarter century, was the most senior in a wave of congressional delegations to travel to Taipei. At least 149 US senators and representatives have made trips to the democratically governed island over the past decade, according to Taiwanese government statements and congressional travel records, including 33 so far under Biden.

On Sunday, Senator Ed Markey, a Massachusetts Democrat, arrived in Taiwan as part of a five-member congressional group, making this year the busiest for such visits since 2016. The Chinese military announced fresh military patrols in the “sea and air space around Taiwan” on Monday to “fight back” against Markey’s visit.

US Congressional Trips to Taiwan

American lawmakers are visiting Taipei at the fastest pace since 2016 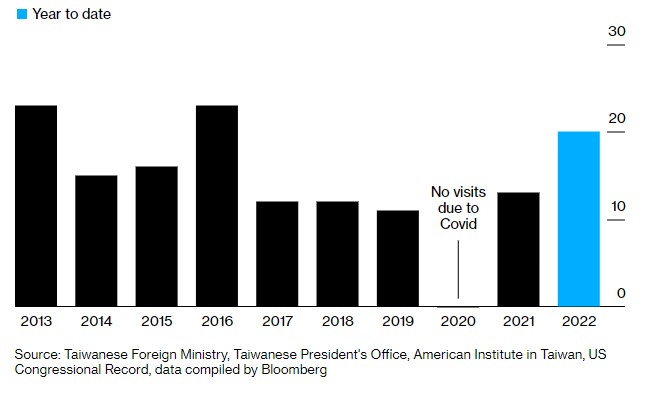 Lawmakers have also proposed or passed multiple pieces of legislation aimed at strengthening ties with Taipei, including the Taiwan Policy Act, which would officially recognize the island as a “major non-NATO ally.” The Biden administration has pushed for changes to the law, warning that it would undermine the US’s longstanding “One China” policy.

The discord not only raises the risk for miscalculation, but it also threatens to roil the broader relationship between the world’s biggest economies. Biden and Chinese President Xi Jinping had been preparing for their first face-to-face meeting prior to Pelosi’s visit, which upended talks on tariffs, climate change, defense and several other topics.

“Members of Congress from both parties now see value in using Taiwan for virtue signaling, as more negative views of China become mainstream in American society,” said Denny Roy, senior fellow at the East-West Center in Honolulu. Congress is making “dramatic gestures without considering the negative consequences for other US interests,” Roy said.

While the Biden administration argues congressional trips including Pelosi’s have no bearing on the US’s 50-year-old agreement to cut formal ties with Taipei, Beijing increasingly sees them as a threat to its claims on Taiwan. China responded to Pelosi’s trip by firing 11 missiles in to the seas around Taiwan, sanctioning the speaker and suspending a series of military and climate talks with the US.

More hawkish moves by Congress could leave Biden with a choice of whether he would rather look weak in Washington or in Beijing. Pelosi’s visit, for example, required the president to explain he can’t control lawmakers of his own party to Xi, who holds such sweeping power he’s been called the Chairman of Everything.

The 33 lawmakers who have visited Taiwan so far under Biden’s compares with 35 who visited during Trump’s entire term as president, although the pandemic curbed travel during his final year in office. Some 71 visited during former President Barack Obama’s second term.

Republicans have comprised about 60% of the American lawmakers who have traveled to Taiwan over the past decade, although Democrats are outpacing the GOP this year, 13 to seven.

Biden’s next battle with Congress over China could center on the Taiwan Policy Act. The bill’s main sponsors — Senator Bob Menendez, a New Jersey Democrat who heads the Foreign Relations Committee, and Senator Lindsey Graham, a South Carolina Republican — are both longtime China critics who made trips to Taiwan in April.

If passed, the legislation would provide Taiwan with $4.5 billion of defense assistance over four years and set up a sanctions regime to penalize Beijing for any hostile action against Taiwan. It would also require the US to regularly assess the risk of a Chinese invasion and help train Taiwanese forces for such an attack.

National Security Council spokeswoman Adrienne Watson said in a statement that the bill contradicted the US government’s longstanding “One China” policy, which deems the question of sovereignty over Taiwan as undetermined. Washington for decades has adopted “strategic ambiguity” over whether US forces would defend Taiwan against China.

“You have to wonder how much of the US’s Taiwan policy is actually left if they designate Taiwan as a major ally,” said David Smith, associate professor at the University of Sydney’s United States Studies Center. “This does suggest that there will be a direct US response if there were ever a Chinese invasion.”

Share of US congressional trips to Taipei over past decade

Several Democrat senators have echoed the White House concerns about the legislation and likely will try to rewrite significant provisions as it goes through the committee and amendment process before getting a vote on passage. Menendez intends to bring the Taiwan legislation up for a vote before the committee after lawmakers return from an August recess, his spokesman, Juan Pachon, said, noting that it was subject to changes by the committee.

“When the House speaker, being the third-highest-ranking figure in the US government, flies on US military aircraft and makes a provocative visit to the Taiwan region, it is by no means an unofficial action,’ Hua said.

Proponents of greater recognition for Taiwan argue Xi has altered the status quo with his campaign to isolate President Tsai Ing-wen, who often grants visiting American officials a personal audience. The Trump administration sent Health Secretary Alex Azar to Taipei in 2020, the highest-level US official to visit in four decades, while Biden’s trade representative, Katherine Tai, held talks a Taiwanese minister in May.

Pelosi and those who accompanied her on the trip insist they don’t want to shift US policy toward Taiwan. “Nobody wants to change anything” House Foreign Affairs Chairman Gregory Meeks, a New York Democrat, told a news conference Wednesday.

House Republican leader Kevin McCarthy said last month that he would also lead a delegation to Taipei, if Republicans win control of the chamber next year and he becomes speaker.

Successive US administrations have argued that American visits are consistent with the 1979 Taiwan Relations Act, which calls for “extensive, close and friendly commercial, cultural and other relations” between Washington and Taipei. But Beijing has cooled to them in recent years, as it becomes more convinced that Washington is trying to contain its rise.

Other nations with similar One China policies are sending their own delegations to Taiwan. A group of British MPs plan to visit this year, according to the Guardian newspaper, while Lithuania’s speaker said she intends to discuss a joint visit to Taiwan with other European Union legislative leaders.

“In the future, there will be more and more high-level officials from countries visiting Taiwan because Pelosi did this,” said Wang Ting-yu, a lawmaker who sits on the foreign affairs and defense committee of Taiwan’s parliament. “It’s a diplomatic precedent. And that’s what Xi Jinping fears.”

Hong Kong stocks advance as developers get China boost while…