The outlook for China’s equities are uncertain in the second half, as securities analysts and strategists are divided on how stock prices will be affected by a range of factors from macroeconomic policies to the pace of inflation and the value of the yuan against major currencies.

Citic Securities, the largest Chinese brokerage and owner of the CLSA Asia franchise, is the most bullish among those that have published reports of the second-half strategic outlook, predicting that China stocks will rise with accelerating vaccinations, accommodative monetary policies and the strengthening of the local currency.

The US Federal Reserve is “unlikely to taper the bond purchase this year and China monetary policy will remain neutrally stable, with no adjustment in interest rates,” Citic’s analysts led by Qin Peijing wrote, predicting that gains in stock prices will pick up speed in the fourth quarter. “China’s stocks are still attractive in allocations.”

The cloudy outlook comes as the world’s second largest capital market stands at the cross roads, with pockets of Covid-19 outbreak in several cities and provinces threatening to undo the nation’s success in beating back and containing the disease.

Share of population that has received at least one vaccine dose 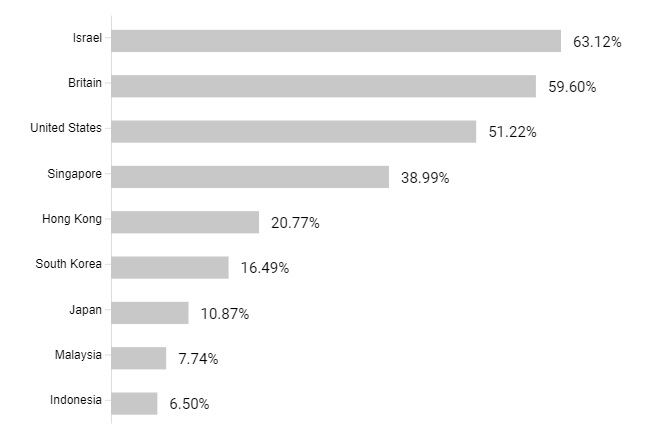 CSC Financial, Huaxi Securities and Orient Securities are less upbeat, saying that concerns about rising US bond yields, lingering inflation and slowing earnings growth will compound the uncertainty in equities.

The divided views highlight a more complicated trading environment for Chinese stocks, which have been swayed by positive developments and negative news during the first half. The market was rattled by looming inflation stoked by surging commodity prices and fears that the US Fed would taper bond purchases earlier than expected. Persistent tensions between China and the US have also weighed on sentiment.

Still, the bearish mood has largely been offset by the pledge by the US Fed to keep the monetary stimulus in place for an extended period of time, Beijing’s crackdown on price increases on raw materials and the recent yuan’s appreciation.

China’s inflation has already peaked, and Beijing will refrain from making a sharp policy shift to leave liquidity ample, Citic Securities said. Inflows to onshore equities may reach about 220 billion yuan (US$34.4 billion) in the second half, as the yuan’s strength boosts the appetite for assets linked to the local currency, it said.

CSC Financial and Huaxi Securities remain cautious. “There will be no systemic opportunity in the second half as rising US Treasury yields and a temporary devaluation of the yuan are set to have a negative impact,” said Zhang Yulong, an analyst at CSC Financial. “The market will probably maintain the current pattern.”

The view is echoed by Huaxi Securities, whose strategist Li Lifeng said inflation will be a perennial factor holding back equities in the future.

“There is a lot of disruption on the macroeconomic policy front,” he said. “Volatility of stocks will increase and there will be lots of back and forth.”

China must focus on own affairs even more amid China-US…