After a brutal start to the year, traders are pinning their hopes of a turnaround in Chinese stocks on top policymakers, who will gather in Beijing this week for the annual legislative and consultative conferences that set in motion economic policies and growth targets.

The National People’s Congress (NPC) and the Chinese People’s Political Consultative Conference (CPPCC) will be in the spotlight at a time when the pressure on a slowdown in growth is building up and the government’s efforts to bolster the economy have so far failed to buoy share prices.

Beijing will put stabilising growth at the top of its agenda at the upcoming gatherings, according to investment banks from ING to Sealand Securities and China Galaxy Securities. Union Bancaire Privée (UBP) predicts that China’s central bank will further loosen monetary policies by extending cuts in borrowing costs. 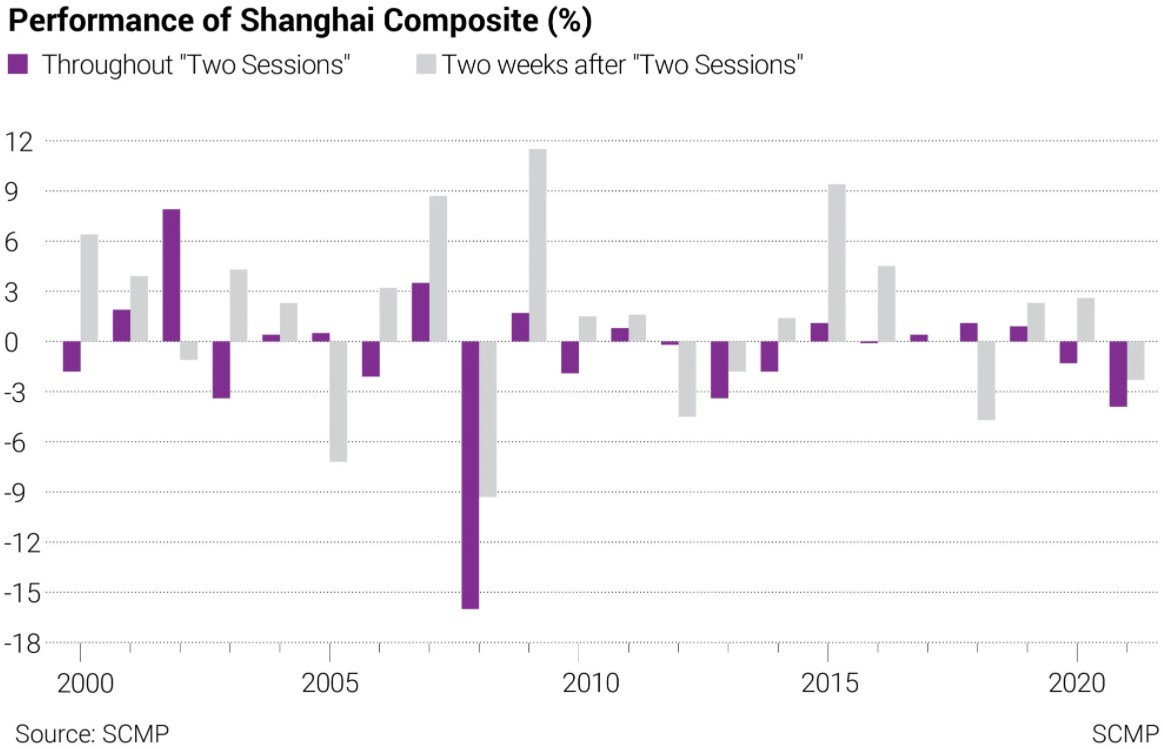 Historical data is marginally in favour of stock traders during the two sessions period. The Shanghai Composite rose by an average 0.01 per cent throughout the NPC and CPPCC meetings since 2000, excluding a 16 per cent slump in 2008 amid the global financial crisis, according to data compiled by the Post.

Two weeks after the meeting, the index has posted an average gain of 1.5 per cent, the data shows.

The CPPCC, which advises the government on major policies, kicks off on Friday, while the NPC, the nation’s top legislative body, is due to start its meeting the following day.

NPC delegates are set to deliberate Premier Li Keqiang’s government work report that will highlight key tasks for the year and development goals ranging from economic growth to fiscal and military spending targets. The conferences, known as the “two sessions”, are expected to last for about a week, shorter than the fortnight duration of the pre-pandemic era.

“With the two sessions around the corner, we expect more policy easing to bolster the market’s confidence in stabilising growth,” said Meng Lei, a strategist at UBS in Shanghai. The Swiss investment bank is turning upbeat about Chinese stocks, citing signs that policy loosening is gathering pace.

So far, investors have been unconvinced by what Beijing has done to stem a decline in growth. That includes two consecutive cuts in the loan prime rate (LPR) in December and January, a record amount of credit advanced by commercial banks last month and the easing of curbs on the property sector.

The Shanghai Composite Index of onshore stocks has retreated about 4 per cent this year, falling in tandem with a global rout spurred by fears of aggressive policy tightening by the Federal Reserve.

A credit crunch rattling the property sector, lockdown measures imposed to fulfil the zero-Covid policy and concerns about potential capital flight because of the strengthening US dollar are among the headwinds facing the world’s second-largest economy.

“Given that the pressure on this bout of the economic slowdown is big, we believe that there will be probably more room for monetary policies before the second quarter,” said Cai Ruolin, a fund manager at HSBC Jintrust Fund Management in Shanghai.

UBP, the Swiss private bank, expects one more cut in interest rates in March or April before the authorities start to rely on credit supply, open market operations and lowering the reserve requirement ratio as their primary easing measures going forward. Fiscal support may take over from monetary stimulus in the second half of the year as a growth-bolstering measure, it said.

Investors’ risk appetite may soon recover amid signs that Beijing has already started to extend policy support beyond traditional infrastructure projects like building roads and bridges.

The nation’s top planning body this month issued a guideline requiring internet food-delivery platforms such as Meituan to cede more profits to restaurants, while at least 15 local governments outlined plans to speed up new-infrastructure construction such as wind and solar power.

For Lin Rongxiong, an analyst at Essence, the only way is up for China’s stocks as increased policy support puts a floor under equities.

“The market will ultimately choose to stand on the same side with policies,” said Lin. “The market is now at the bottom and there is no room for a systemic decline.”

China Can Bypass SWIFT by Putting Digital Money in Play