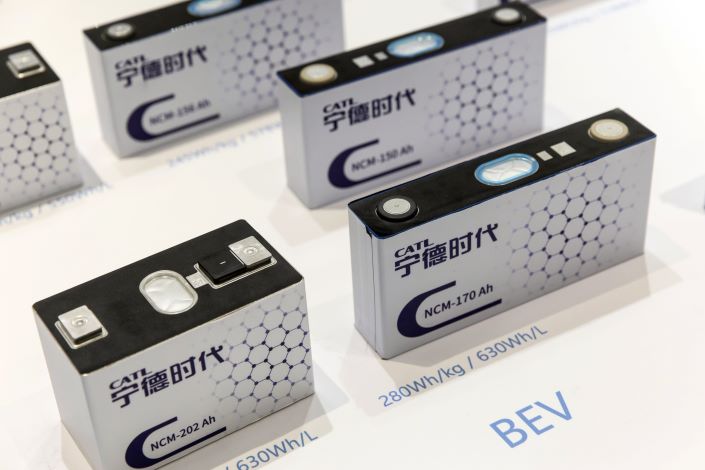 What do Asia’s five best-performing $1 billion-plus equity funds for 2021 have in common? They are all betting big on China’s renewables push.

The funds returned at least 40% each by investing in stocks that are part of the renewables and electric-vehicle supply chains, according to data compiled by Bloomberg. The $3.7 billion China AMC Energy Innovation Equity Fund led the pack with total returns of 55%, followed by First State Cinda New Energy Industry Equity Fund and HSBC Low Carbon Pioneer Fund. 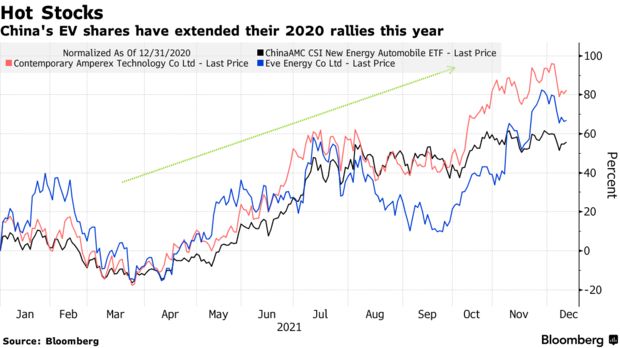 China’s push to reach carbon neutrality by 2060 is fueling growth in what is already the world’s largest renewables market and a leading one for electric-vehicle automakers and suppliers. That’s produced record rallies and eye-watering valuations for some stocks in a sector that has boomed globally this year as policy makers try to curb fossil fuel subsidies and coal use.

“Carbon neutrality is going to be one of the largest investment themes for the next five to 10 years” and there is room for firms within this sector to grow by a few or even ten times, said Bin Lu, the Shanghai-based manager of the HSBC Low Carbon Pioneer Fund.

Contemporary Amperex Technology Co., the world’s largest power battery maker, is a recurring name among the top 10 holdings of the outperforming funds. The stock has jumped more than 80% to record highs this year. Automaker BYD Co. and Tesla Inc. supplier Ganfeng Lithium Co. – other investor favorites – have surged more than 50% each.

Those shares were boosted by President Xi Jinping’s “common prosperity” drive, which stresses sustainable growth. His announcement of a massive renewable energy project in the desert has also supported solar and wind shares.

For Raymond Jing, who manages the ChinaAMC New Horizon China A Share Fund that returned more than 40% this year, CATL’s penetration rate and market share is “rapidly increasing,” which could eventually push its forward price-to-earnings ratio down to 40 to 50 times from about 78 times.

To be sure, not everyone is comfortable with the valuations of some of the popular names in the clean energy sector. In a sign of that unease, solar glass maker Xinyi Solar Holdings Ltd. is down about 24% from an August peak and inverter maker Sungrow Power Supply Co. has dropped around 13% after reaching a record high in October.

Deepening investors’ trepidation are bets that the Federal Reserve will taper faster than expected, and the passage in the U.S. House of legislation designed to punish China for its treatment of Uyghur Muslims. The lithium battery supply chain is also facing some pressures from Beijing’s guidelines published last month that aim at reducing capacity expansion.

“The short-term market for new energy is very hot, and the stock prices of some companies have shown a tendency of short-term bubbles,” Zheng Zehong, manager of the China AMC Energy Innovation Equity Fund said in a third-quarter report, stating that the fund has made some adjustments to positions. In the longer term there remain “abundant investment opportunities,” he added. 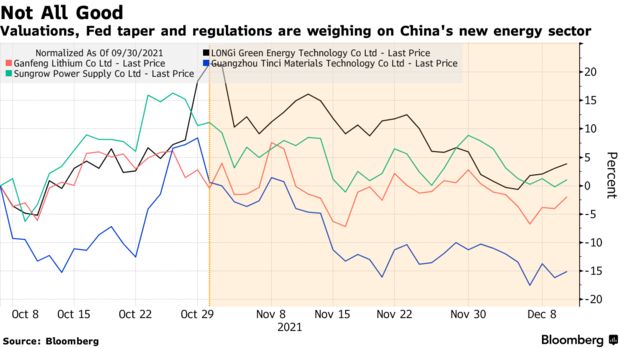 The government has vowed to accelerate the development of electric vehicles and highlighted ambitions to lower carbon emissions per unit of industrial output by 18% during the 14th five-year plan period. CATL and another leading EV battery maker, Eve Energy Co., are expanding production at a time when China’s EV sales are in line to more than double 2020’s total.

“The sector is consolidating” with CATL and BYD among the top five firms that will eventually control about four-fifths of the market, he added.