These Are Four Challenges for $441 Billion Rebound in China Tech

Chart patterns indicate that a revival in China’s technology stocks is running into key technical tests.

The Hang Seng Tech Index has rallied 39% since mid-March through Friday on bets that Beijing is drawing the curtain down on a regulatory clampdown on the sector. That’s added $441 billion in market value across the 30-member gauge. The index lost as much as 4.4% on Monday amid a global selloff after US consumer prices rose at a fresh 40-year high.

There are also tentative hopes that the worst of China’s Covid lockdowns have passed, although virus flareups and repeated shutdowns remain a risk. Another challenge is damage to wider risk sentiment from the inflationary pressures cascading through the global economy.

While China’s economy “is likely to bottom out in April to June, it’s not clear if companies are willing to spend a lot of money on advertising, which is a vital factor for many tech shares,” said Wang Shenshen, senior strategist at Mizuho Securities Co. “Markets will probably need to see clear signs of solid growth in tech companies for their shares to rise.”

Four charts sum up some of the technical challenges Chinese tech stocks face: 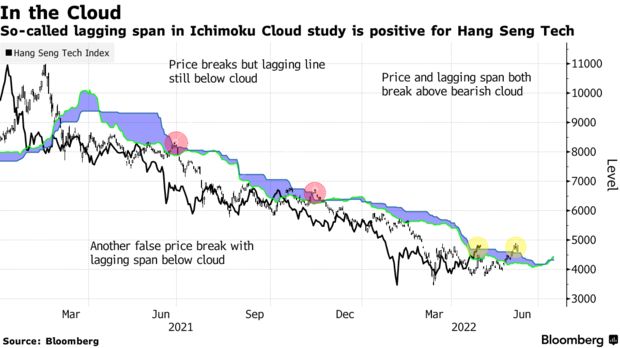 The Hang Seng Tech index, which includes firms such as Alibaba Group Holding Ltd. and Tencent Holdings Ltd., has broken above a bearish zone in Ichimoku Cloud analysis, a popular technical study. Both the gauge and the so-called lagging span — which shows closing levels plotted 26 days into the past — have broken above the zone. Proponents of the study argue this pattern has to hold to bolster the index’s outlook. 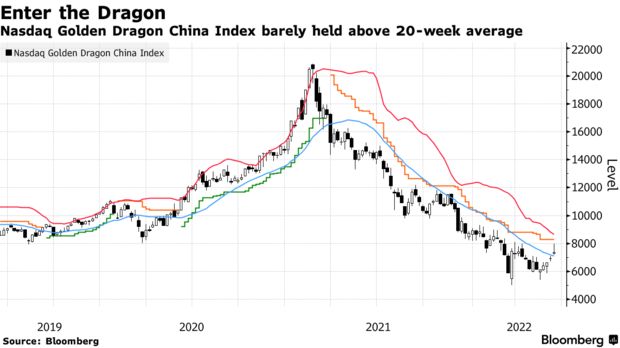 The Nasdaq Golden Dragon China Index added more than 6% last week to close just above its 20-week average for the first time since its plunge began in February last year. Holding above the average, and pushing through 8,300 to 8,700, are thresholds technicians are watching to cement nascent optimism about the prospects for the 81-member gauge of US-traded Chinese shares.

The $7.6 billion KraneShares CSI China Internet ETF (ticker KWEB) has jumped about 49% since mid-March. The rally is now meeting resistance at the $33 to $34 price zone. This zone is a region that includes the measured objective from a so-called reverse head and shoulders and a key Fibonacci level. 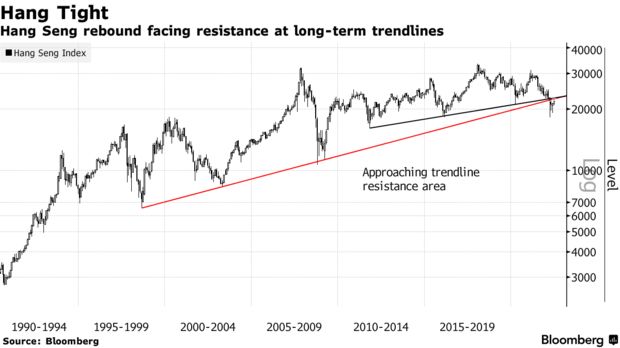 The broader Hang Seng Index has been lifted by the tech revival but also faces a test. Earlier this year it slid below a trendline originating from 1998 Asian financial crisis lows. The trendline, which earlier had acted as reliable support, is now a key resistance the gauge must overcome.

Taiwan on agenda at Shangri-La Dialogue as China, US defence…