The shape of a potential US-China deal

Reduction of Trump-era tariffs on Chinese imports could see Beijing loosen monetary policy and ease runaway inflation in the US.

After Presidents Joe Biden and Xi Jinping struck a constructive – if not conciliatory – tone at Monday’s virtual meeting, China’s Vice President Wang Qishan told a Singapore conference by video last week that “China cannot develop in isolation of the world and nor can the world develop without China.”

Wang’s remarks in his keynote address to the Bloomberg New Economy Forum evidently offered a riposte to Western perceptions that China had reverted to a kind of Maoist autarky. On the contrary, “China will not waver in its resolve to deepen reform and expand opening up,” Wang said. “Going forward, China will keep its arms wide open, provide more market investment and growth opportunities to the world.”

Former US Treasury secretary Hank Paulson, who managed the 2008 financial crisis with help from Wang, told the same conference: “Wholesale financial decoupling” between the US and China “is impossible, and partial decoupling is likely to make the US, China and the world more susceptible to financial crises. It is crucial to have a mechanism for the world’s first- and second-largest economies to coordinate, as this is the only way to put out the next big financial and economic fire.”

Former US secretary of state Henry Kissinger, also speaking on a video connection, said that US-China relations are “on a precipice in which you can look in both directions.”

He added that “both sides have to adopt the view that a conflict between major technical powers of comparable capacities must not occur for the preservation of humanity, and they therefore have to decide that they will attempt to compose their differences to a level in which coexistence becomes not only possible but essential.”

“Public opinion in the US has moved in the direction of looking at China as a rival,” Kissinger added. “The necessity for both sides is to see whether from that posture, they can move to a pattern in which disputes are attempted to be mitigated and in which they realize that a victor is possible without the risk of destroying humanity.”

An important asymmetry characterized the statements of Chinese and American speakers at the Singapore event.

China’s Communist Party will do what its elders deem best, while American responses are driven by electoral politics. The Biden administration will avoid at all costs the perception that it has gone soft on China, or that it acts at the behest of American financial institutions seeking to make money in China.

Nonetheless, Paulson’s warning about the need for financial and economic cooperation has the full attention of the Biden administration, whose poll numbers have declined in inverse proportion to the US inflation rate. That is where China can help.

When Wang and Paulson worked together in 2008, the world faced a deflationary collapse of the US mortgage market and by extension the world banking system, and the support of China – then America’s largest creditor – made Paulson’s bailout plan possible.

The fire next time is already on the horizon, namely inflation. As I wrote on November 19, the latest Federal Reserve survey data show some of the highest inflation numbers on record, while the Consumer Price Index (CPI) during the past 12 months rose at the fastest rate in 40 years.

Customers are piling on new orders while the wait time for delivery of old orders rose to an all-time high, because they are afraid that they will pay higher prices in the future. That is the financial equivalent of a stadium stampede.

Federal stimulus of US$6 trillion since the start of the Covid-19 epidemic is the cause of US inflation, and the Biden administration wants to push through an additional $2 trillion of spending – which is likely to turn into $4.6 trillion of spending, according to the University of Pennsylvania-Wharton Budget Model.

Rational economic management would dictate a rollback of federal stimulus in the face of price increases (more than 6% on the CPI) that outstripped the past year’s hefty increase in wages (about 4%), leaving the average American maddeningly poorer.

But Biden has made promises to Democratic constituencies that he cannot abandon without losing his administration’s raison d’être.

The US Federal Reserve has accommodated the massive increase in federal handouts to US households and will take only the most tentative steps to reduce the rate at which it buys Treasury debt from the market.

The Fed has signaled that it won’t raise interest rates next year. As a result the so-called real, or inflation-indexed, Treasury yield has fallen to the lowest level since indexed Treasury notes were issued in 1999, while the inflation expectations embodied in the Treasury market have risen to the highest level on record. 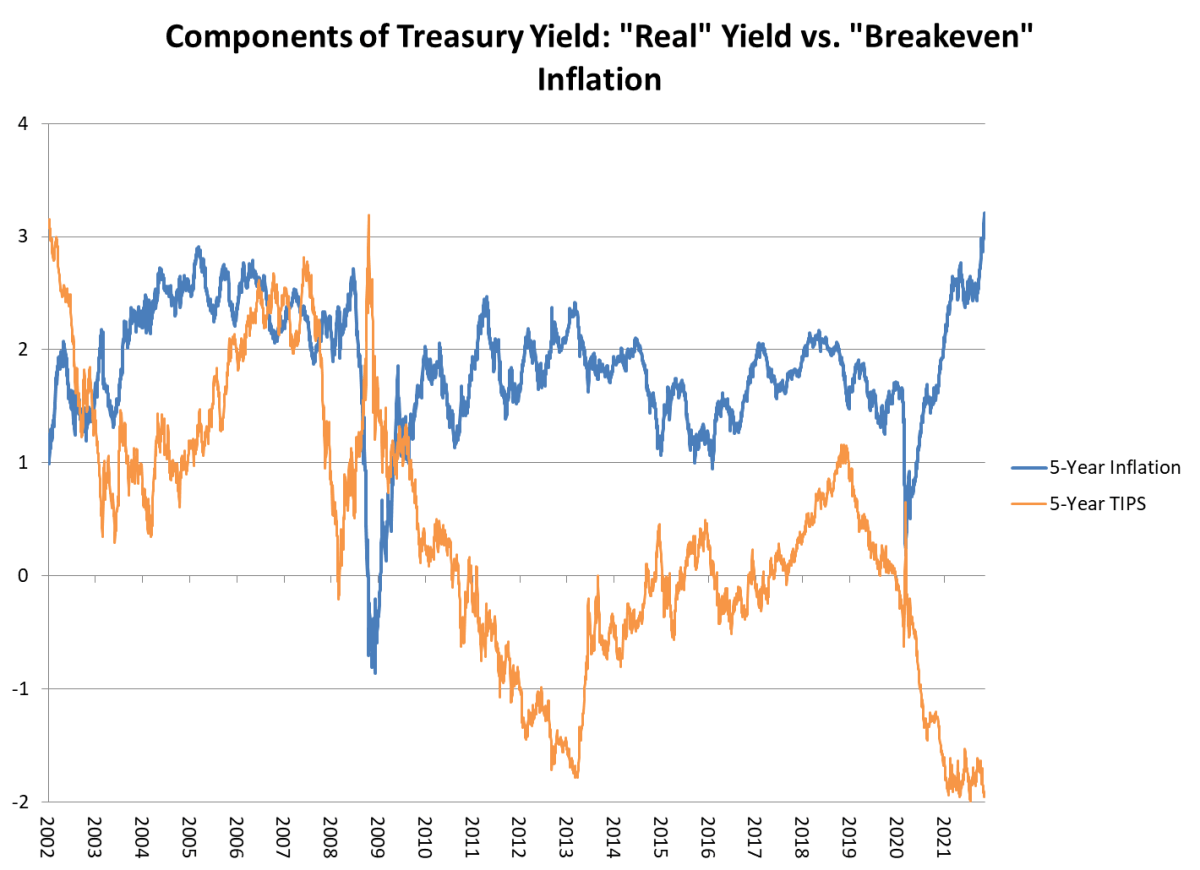 The fall of the dollar from 7.2 yuan to 6.38 yuan between January 2020 and the present is the result of the collapse of “real” Treasury yields and the surge in inflation expectations. China’s monetary policy has remained stable throughout the crisis while the US and other Western countries eased aggressively. The shift in exchange rates is not a rise in the yuan, but a fall of the dollar. 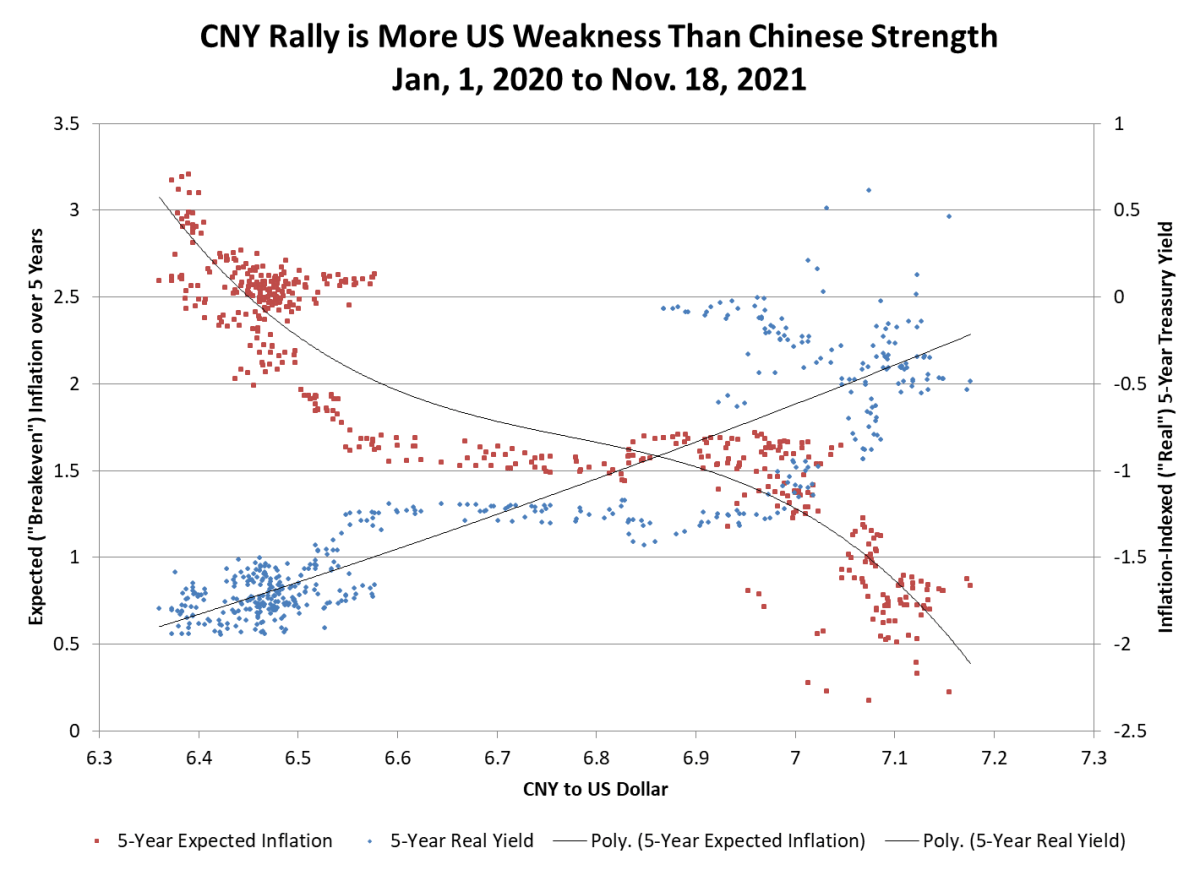 The falling dollar, in turn, contributes to a rise in US import prices, which are an important contributor to US inflation. 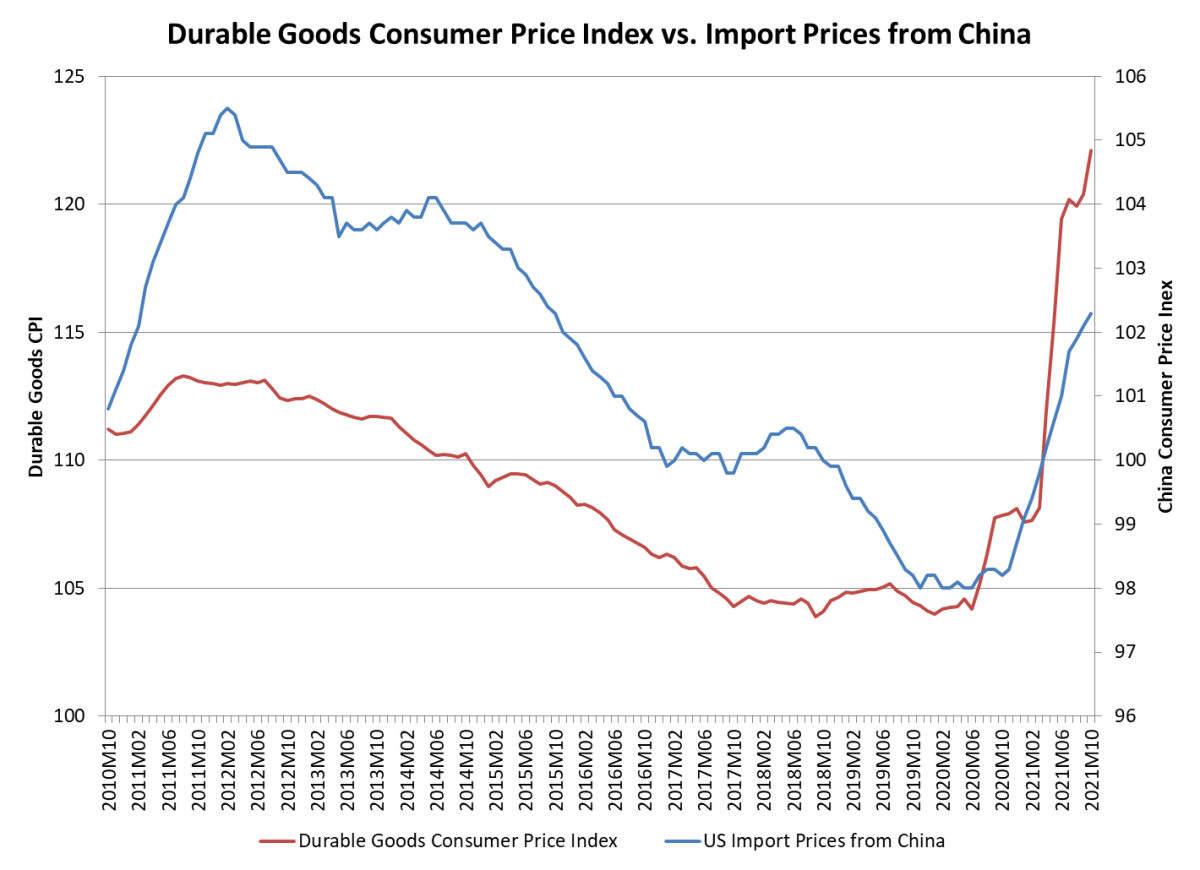 A just-published study by the New York Federal Reserve Bank provides the economic rationale for a tacit deal between Beijing and Washington: The US would eliminate some of the tariffs that Donald Trump imposed on Chinese imports in 2018, while China would ease monetary policy and weaken the yuan.

China has no reason to ease monetary policy for domestic reasons; on the contrary, Chinese authorities have stated repeatedly that they fear what will happen when the asset bubbles in the West explode. They want to clean up credit quality in China. During the past year, China is the only major economy to show a decline in the ratio of non-financial sector debt to GDP.

But the promise of a reduction or elimination of the Trump tariffs probably would be incentive enough for China to put these concerns aside and loosen monetary policy in the context of a deal with the United States.

This would reduce the price of the $600 billion per year of goods that Americans buy from China. Import prices are “the secret sauce of low inflation these past 25 years,” the consulting firm TS Lombard wrote in a November 18 note to clients, and a big part of America’s inflation problem is that the Fed has lost control of import prices.

That would take some pressure off the Biden administration, whose approval rating dropped into the mid-30% range in some polls after the CPI showed a year-on-year jump of 6.2%, the worst in 40 years.

Even that figure is probably an underestimate, given a 20% year-on-year surge in US home prices and rent increases of 9% to 15% according to private surveys. The CPI shows a year-on-year rise in the cost of shelter of just 3.5%.

Import prices, the NY Fed economists argue, contribute much more to US inflation than they did in the past. Entitled “High Import Prices along the Global Supply Chain Feed Through to US Domestic Prices,” the November 8 report compares changes in domestic producer prices to changes in import prices. Before the Covid pandemic, the correlation was just 27%, but after Covid it jumped to 57%.

“This higher correlation likely reflects the fact that countries around the world have been hit with the same kind of supply-side shocks, driving all prices up,” the NY Fed concluded.

A Sino-American deal on economic and monetary matters would improve US-Chinese relations, but it wouldn’t necessarily defuse strategic tensions between the two powers. Different salients of American policy appear to be on separate autopilots.

The Chinese state media noted approvingly that Treasury Secretary Janet Yellen was at Biden’s side during his meeting with Xi. Secretary Yellen has stated on numerous occasions that reducing tariffs on Chinese goods would help control inflation.

Even if the US and China were to strike an economic deal, the State Department might step over one of China’s tripwires, for example, by appearing to encourage Taiwanese independence. National security comes first in Beijing, and the risks of a tragic misunderstanding remain high, despite the improved tone of recent statements on both sides.

Soros vs Dalio in an Olympian debate on China