Beijing is getting good at calibration, and that means a tough road ahead for those trying to anticipate the government’s next move.

In water torture, liquid is dripped slowly on to the head of an immobilized victim. Investors waiting for a predicted rally in the nation’s stocks may know the feeling. The anticipated policy easing that was largely the basis for a resurgence of optimism late last year is indeed arriving — but in an erratic trickle that seems never quite enough to lift Chinese equities into a sustained upturn.

So far in 2022, China has cut interest rates for the first time in two years, reported record lending for January, prodded banks several times to increase credit, used state-owned funds to support the stock market and, on Tuesday, pumped cash into the system via the central bank’s medium-term lending facility. After all that, the benchmark CSI 300 Index is down 6.5% and the Shanghai Composite has lost 4.8% for the year as of Wednesday’s close (Chinese stocks traded in Hong Kong have done better, with the Hang Seng China Enterprises Index rising 5.4%).

The question for investors is whether this plethora of micro-steps is building to a critical mass that will finally trigger a takeoff — and how long stock bulls can keep the faith and hang on for that moment. Societe Generale SA, Goldman Sachs Group Inc. and UBS Group AG are among banks and fund managers that turned overweight on China’s stocks in the past few months. It’s mid-February, and even after the modest gains spurred by Tuesday’s liquidity injection, the main onshore indexes are still solidly in the red.

Some analysts may be wavering. “The best advice for investors at this point is to stay out of Chinese equities unless and until the government delivers stronger policy support,” Gavekal Research Ltd.’s Thomas Gatley wrote in a note Monday. Gatley’s decision rule suggests buying Chinese equities when private-sector credit growth is accelerating on a three-month moving average basis, an indicator that turned green in January. The trouble is that this buy signal is far weaker than in previous easing cycles, he noted.

This points to the difficulty for those trying to divine the future direction of China’s stock market: Beijing is getting good at calibration. There was a time not so long ago when the instruments were much blunter. Easing meant up, tightening meant down. With an army of retail traders primed to respond to the signals from above, that led to a couple of crazy bubbles followed by painful collapses. The Shanghai Composite is still about a third below its 2015 high and stands at not much more than half its all-time peak during the 2007 bull market, almost 15 years ago.

China’s policy makers have become more nuanced in their approach

The failure of stocks to respond this time is a reminder that we are in a more complicated, and nuanced world. Chinese authorities have made clear that stability is the byword for this year. It’s easy to see why. Economic growth has slowed significantly since the go-go days of the last two major bull markets, and the government is pursuing a tricky transition away from dependence on debt-financed real estate. Meanwhile, we’re two years into a global pandemic and the highly transmissible omicron strain presents a threat to China’s Covid-zero approach. Elsewhere, U.S. inflation has surged to a four-decade high. Excessive easing when the Federal Reserve is primed to tighten could encourage financial volatility. And the last thing China needs in these circumstances is to inflate another bubble.

If Vanke Is Worried…

The Shenzhen-based company is among the bigger, financially stronger and more prudent Chinese developers 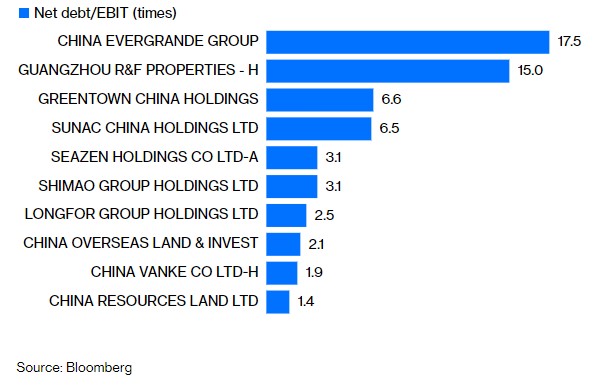 Events could yet force the government’s hand, for example if distress in the real estate sector deepens or pandemic restrictions further undermine growth. How’s the property market looking? Not great, if you take the China Vanke Co. chairman’s word for it. “We are on our last legs,” Yu Liang was cited as saying in an internal document reported by the South China Morning Post and other local media this week. The company was in a “life or death” battle, Yu said, though “You will win, if you dare to fight.” When the head of one of the largest and financially strongest developers in China starts talking like Henry V before Agincourt, that’s not an encouraging sign — even if (like Henry) he is confident of ultimate victory.

For now, though, expect policy makers to stick to a gradated and unpredictable approach that puts a floor under the economy without causing animal spirits to run wild. Tuesday’s liquidity injection disappointed some analysts who had forecast that the central bank would cut rates again at the same time. Water torture, we should note, works by causing anxiety in subjects who try to anticipate the irregular pattern of drops. Stock bulls may need plenty of mental fortitude in the coming months.