Is China’s economic miracle over? Covid-19 lockdowns, a real estate meltdown, and a crackdown on entrepreneurs add up to a lot of downers. The latest forecasts show growth for 2022 at risk of sliding below 3%, well short of Beijing’s 5.5% target. The response from President Xi Jinping and his team so far has been improvised and underwhelming, a stark contrast with the huge government rescue plans in the past.

If China is in for a hard landing, the consequences would be cataclysmic: for the financial system and economy, crisis and recession; for the ruling Communist Party, a shift from legitimacy based on prosperity to control underpinned by repression; for global markets—already reeling from the war in Ukraine and the US Federal Reserve’s rate hikes—a shock that rivals 2008’s Lehman moment.

Amid the host of potential losers, spare a thought for the author who—in 2020—published a book with the provocative title China: The Bubble That Never Pops. I made the case that the country’s economic and financial system is more resilient, and its policymakers more ingenious, than critics in Washington and on Wall Street would have you believe.

In the two years since, that thesis has undergone an extreme stress test. Some might say it’s failed. In the second edition of my book, I take a different view. Yes, the air is coming out of the China bubble at a faster pace. But no, it’s not going to pop.

To explain why, let me start with the pandemic. In September 2020, Xi declared that his country’s response “once again proved the superiority of the socialist system with Chinese characteristics.” Two years on, with the rest of the world open for business while Chinese cities are still subject to punishing rolling lockdowns, it’s China’s critics in the West who’ve succumbed to a similar case of hubris.

Who’s right? Certainly, China’s pandemic response doesn’t look as impressive as it once did. As the chart on the next page shows, lives have been saved, but growth has been sacrificed. Still, don’t forget the price other countries paid to recoup a semblance of normal life: a million dead in the US, a million more in Europe. If China had followed a similar path, given its larger population and stretched health-care resources, the numbers could easily have been substantially higher. 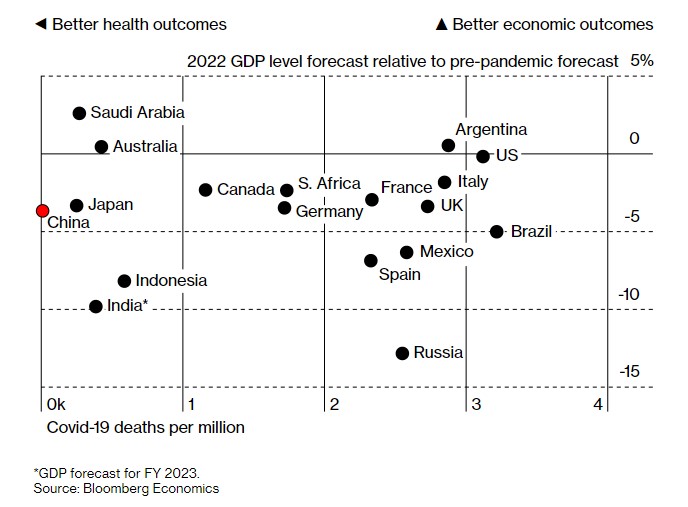 Perhaps Covid hasn’t revealed the superior crisis-management capacity of free-market democracies over state-controlled autocracies or the reverse, but rather the strengths and weaknesses of each system. The US and Europe couldn’t mobilize society to beat back the first waves of the virus, resulting in tremendous loss of life. But they were flexible in adapting policies, and their innovative pharmaceutical makers delivered highly effective vaccines, enabling an early exit from Covid constraints.

China’s authoritarian regime didn’t balk at imposing restrictions on liberty that saved lives. But the same stifling of dissent that enabled draconian lockdowns made it hard to adjust policies in line with changing circumstances, leaving the country stuck with Covid Zero long after its sell-by date.

China’s exit from Covid Zero will render the final verdict. If some combination of less deadly strains of the virus, better vaccines, and effective treatments makes it possible for Beijing to relax its stance without a large loss of life, Xi will be able to claim years of rolling lockdowns were a price worth paying. If not, and China suffers losses comparable to the US, his claim to a superior system will ring doubly hollow.

Let’s move on to real estate. For more than a decade, analysts have warned that excesses in borrowing and building have pushed China’s property sector onto an unsustainable trajectory. Based on Bloomberg Economics’ estimates, the supply of new homes is running about 25% above where it needs to be to meet demand over the coming decade. There are some 2.8 billion square meters of residential real estate sitting empty—enough to house the entire population of Italy.

To their credit, policymakers decided to get ahead of the problem by cutting off sources of financing to overleveraged developers. The consequences are now hitting hard, with property sales and construction tumbling, a slew of defaults from builders, and a mortgage strike that threatens repayment of 1.6 trillion yuan ($245 billion) of loans. China bears—delighted their stopped clock is finally showing the right time—are rushing to declare victory.

Even so, a repeat of Japan’s 1989 property meltdown or the US subprime crisis isn’t the most likely outcome. The history of China’s real estate sector has been a series of exuberant booms and near-disastrous busts. Every time it appears the end is nigh, policymakers have tweaked the dials on down-payment requirements, mortgage rates, and financing for developers to get things back on track. They’re doing so again, though this time their goal isn’t engineering another boom, but moderating the pace of decline.

It’s often noted that real estate accounts for about 30% of China’s gross domestic product once all contributions—from building materials to home electronics—are added up. A different way of putting it is that property absorbs, in an inefficient and unsustainable way, 30% of workers and capital. The transition will be painful. But in the end, pointing more of those resources at more productive ends will be positive, not negative, for growth.

How about the “common prosperity” agenda? Xi’s campaign to close the gap between China’s haves and have-nots has touched every facet of the economy. Tech monopolies such as Alibaba Group Holding Ltd. and Tencent Holdings Ltd. have gotten huge fines. Gig economy platforms were forced to pay workers higher wages. Private tutoring companies were strong-armed into operating as nonprofits.

Critics see those moves as reflecting the pathologies of China’s single-party system—paranoid autocrats moving against the entrepreneurs who threaten their control of the economy. Policies that shift income from owners of capital to workers and families will end up stunting growth, they argue, making all Chinese worse off. Reflecting that pessimism, the Nasdaq Golden Dragon China Index, a bellwether for the country’s tech sector, has tumbled almost 70% from its February 2021 peak.

There’s another way of looking at it. China has a serious problem with inequality. A chasm in income distribution rivaling those in Latin America and Africa is complicating Beijing’s efforts to make progress on important goals such as arresting the rapid decline of the workforce by boosting fertility. A study released this year by a Chinese think tank pegged the cost of raising a child to the age of 18 at 485,000 yuan, or 6.9 times average annual income, a higher proportion than in the US and major European countries. For many low- and middle-income families, that’s prohibitively high.

Seen through the prism of those pressing social challenges, it’s possible—and maybe even more plausible—to make the case that Xi’s common prosperity agenda is grounded in sound public policy, a Chinese authoritarian version of the progressive policies also on the table in the US and Europe.

Make no mistake about it, conditions in China’s economy right now are dire. Youth unemployment touched 19.9% in the summer, the highest ever recorded. The flagship CSI 300 equity index is down 23% for the year—more than the S&P 500—even though China’s central bank has been cutting interest rates. Capital outflows have caused the yuan to depreciate against the dollar.

The upside scenario for the years ahead isn’t a return to the go-go years but a resumption of steady growth. Demographics, debt, and overcapacity—in real estate and elsewhere—will continue to drag on the economy. The crackdown on the tech titans has soured the entrepreneurial mood at home, and growing tensions with the US have discouraged international investors. In the five years before the Covid crisis, GDP growth averaged about 6.5%; in the next five years, an average of 4.5% would be a win.

Could it be worse? Sure. But remember that bets on the coming collapse of China are hardly new and—so far—haven’t paid off. In the early 1990s, Deng Xiaoping’s Southern Tour kicked off a post-Tiananmen Square revival of market-opening reforms. In the early 2000s, overhaul of state-owned enterprises, a bailout of major banks, and entry into the World Trade Organization restored growth momentum. In the 2010s, the supply-side reform and deleveraging agendas shut down creaking industrial companies and lowered risk at the banks.

A correct reading of China’s history reveals not a country that never encounters crises, but rather a country that frequently encounters and overcomes them. I hope its policymakers do so again. If they don’t, the consequences for China’s 1.4 billion people, and a world economy that has come to count on this engine of growth, would be catastrophic. Also, I might have to change the title of my book.