Sticking with Chinese stocks after some of the world’s worst losses is not an easy strategy to commit to, but that’s exactly what a few global money managers are planning to do.

UBS Global Wealth Management, RBC Wealth Management and GW&K Investment Management are among those still buying or recommending investments in the country’s beleaguered shares. Reasons include cheap valuations as well as the potential for policy to turn more supportive in the world’s second-largest economy.

Investor confidence in China has been shattered as Covid-Zero lockdowns in some of its biggest cities darken the economic outlook, while Beijing’s ties with Moscow scare some fund managers. The MSCI China Index has tumbled 22% this year, there have been record foreign outflows in bonds and a slump in the currency. 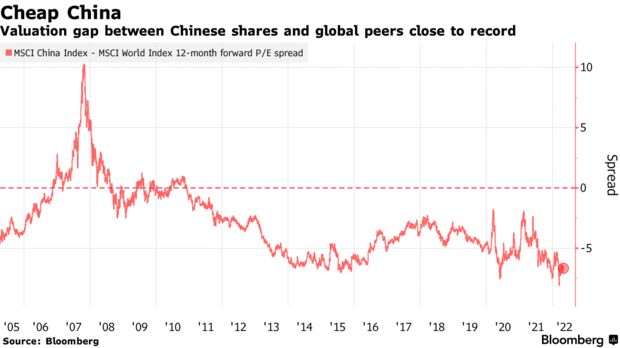 But for contrarians there’s a more positive narrative. Chinese shares are trading close to their biggest discount on record to global peers. The pandemic won’t last forever and the economy will likely recover, aided by stimulus. Bridges and airports will be built, consumers will start buying again and that will lead to earnings growth for Chinese firms.

“Current valuations have priced in much of the negatives,” said UBS Global Wealth strategists including Mark Haefele and Eva Lee this week. “We retain our most preferred rating for China within our Asia portfolios and continue to see areas of value.”

Even as economic forecasts are slashed, China is expected to grow about 5% this year, according to consensus estimates. Covid cases appear to be stabilizing in Shanghai and Beijing, while the State Council on Wednesday pledged to promote the growth of internet platforms and give cash handouts to the unemployed and the government plans to ramp up infrastructure spending.

“The pitch to clients is still about the long-term growth potential in the emerging markets, especially in China, where we believe a large number of the population is joining the middle class and will drive the consumption,” said Nuno Fernandes, a money manager at GW&K Investment Management. 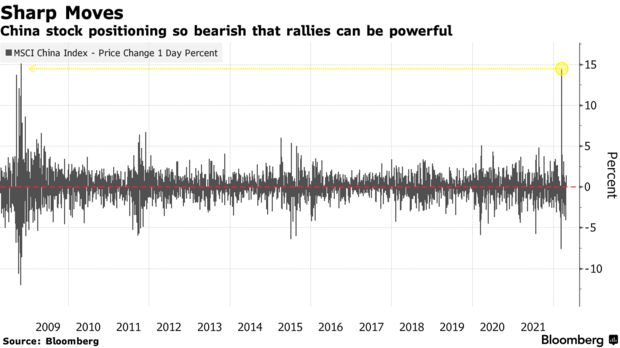 Sentiment is so bearish that any rallies can be swift, as was the case in mid-March when the MSCI China Index rose 14% in one day, the most since 2008.

Foreign investors have snapped up a net 2.05 billion yuan ($309 million) worth of mainland shares via trading links with Hong Kong this month, reversing some of the 24 billion yuan in first-quarter outflows, according to data compiled by Bloomberg.

Still, a slowing property market, which makes up the bulk of household wealth, and worsening virus outbreaks have gotten in the way of growth goals as China sticks to its zero Covid policy. Unlike in 2020, when Beijing was able to rely on unprecedented global liquidity to shore up investor confidence, this time it has to go it alone.

Other challenges include an ageing population and geopolitical tensions with the U.S., which worsened after Russia’s invasion of Ukraine. A regulatory clampdown on technology companies has led to a deep selloff in that sector.

Consumption remains weak with retail sales contracting in March for the first time since 2020. The jobless rate climbed to 5.8% — the highest since May 2020. 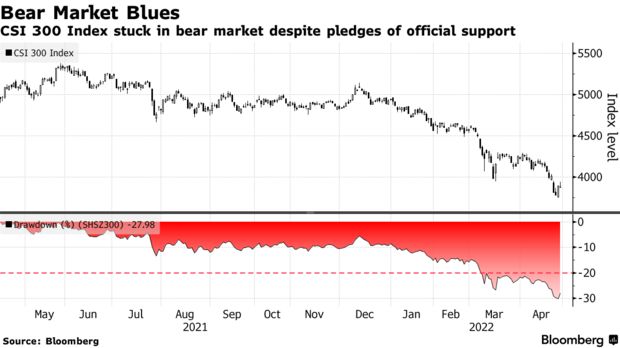 The gut-wrenching stock declines in the past year have led some clients to request emerging-market portfolios that exclude China, said Ferrill Roll, chief investment officer at Harding Loevner.

But for China backers, its economic potential is too strong to ignore.

Despite his long-only Greater China fund losing over half of its value since 2020, money manager Dawid Krige recently told investors that prospects have “seldom been better.”

UBS Global Wealth says more supportive government policies are likely and is recommending cyclical and value stocks as well as those with share buyback programs in place, according to a recent note.