SEC Moves a Step Closer to Delisting Chinese Companies in the U.S. 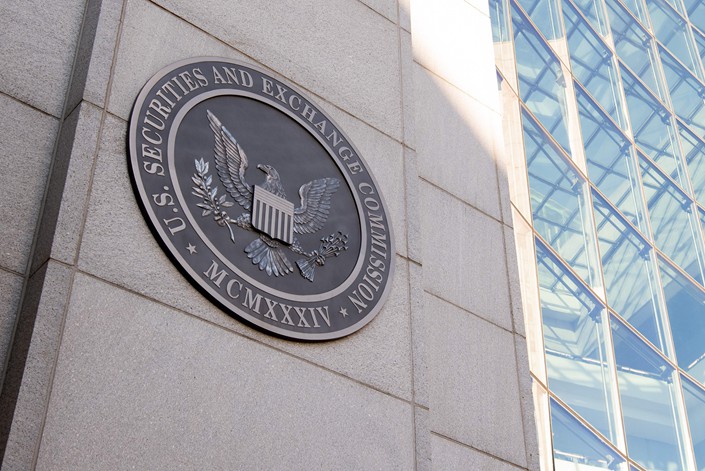 The U.S. government is inching further on efforts to boot Chinese companies off American stock exchanges for not complying with Washington’s disclosure requirements.

The Securities and Exchange Commission on Thursday announced its final plan for putting in place a new law that mandates foreign companies open their books to U.S. scrutiny or risk being kicked off the New York Stock Exchange and Nasdaq within three years. China and Hong Kong are the only two jurisdictions that refuse to allow the inspections despite Washington requiring them since 2002.

The SEC’s new rule, which lays out how the regulator will identify companies subject to delisting and the procedure for kicking non-compliant firms off exchanges, is the latest development in a tussle between financial officials in the world’s two biggest economies. While much of the recent tension has been around the shell companies that Chinese firms use to list in the U.S., Thursday’s regulation dates back decades.

“If you want to issue public securities in the U.S., the firms that audit your books have to be subject to inspection by the Public Company Accounting Oversight Board,” SEC Chair Gary Gensler said in a statement. “While more than 50 jurisdictions have worked with the PCAOB to allow the required inspections, two historically have not: China and Hong Kong.”

The rule gets the ball rolling on a process that could lead to more than 200 companies being kicked off U.S. exchanges. 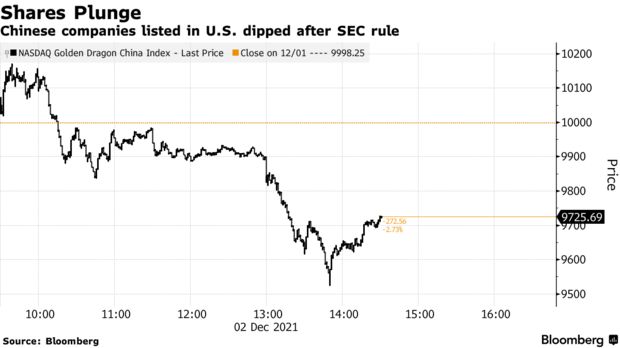 China’s refusal to let inspectors from the PCAOB review audits of firms such as Alibaba Group Holding Ltd. and Baidu Inc. that trade on American exchanges has vexed U.S. regulators for more than a decade. The issue has gained urgency due to rising tensions between the two countries and following the high-profile accounting scandal at Luckin Coffee Inc.

In a rare bipartisan move during the Trump administration, Congress in December 2020 mandated that Chinese companies finally open their books – and required the SEC to write rules for the ones that don’t comply. Thursday’s final plan satisfies that requirement.

After the rule was announced, the Nasdaq Golden Dragon China Index – which tracks 98 firms listed in the U.S. that conduct a majority of their business in China – extended its decline to as much as 3.8%. Tech giants including Alibaba, JD.com Inc. and Pinduoduo Inc. slumped.

China has taken steps in a bid to end the impasse. A top official at the China Securities Regulatory Commission said last month the regulator is “working very hard” to resolve the audit oversight issues with its U.S. counterparts.

The State Council, China’s top government body, in August issued guidelines saying it would boost cross-border accounting cooperation, while also safeguarding its information security. That followed a statement from the nation’s security regulator, which said it would work on enhancing conditions for cooperation with the U.S. on company audits during the second half of the year.

SEC Chair Gary Gensler said in July that the regulator would halt new Chinese initial public offerings, in part over a lack of disclosure around so-called variable interest entities. Separately, Bloomberg News reported earlier this week that China was planning to ban companies from going public on foreign stock markets through VIEs.

As a first step in the new rule, the agency will identify companies that may not be in compliance with the audit inspection requirements. Once a company is classified by the SEC as a “commission-identified issuer,” it’ll have to submit documentation proving it’s not owned or controlled by a government.

Firms will also have to specify in their annual reports additional information about the operating company and any shell companies used to trade, including:

The SEC rule lays out the process for imposing an initial trading ban on firms after three years of non-compliance, as required by the 2020 law.

Top 10 regions in China with highest consumer spending in H1…

China stocks favoured by UBS, Goldman can wait as US$3.9…