Sanctions, Trade, Visas: What Biden and Xi May Discuss at Summit

U.S. President Joe Biden and Chinese leader Xi Jinping have plenty to discuss during their first virtual summit – from sanctions to Taiwan – even as expectations for a breakthrough on major issues are low.

The summit at 7:45 p.m. on Monday night in Washington will mark the third time Biden and Xi have spoken directly this year. But it comes with relations between the world’s two biggest economies tense over disputes including the origin of Covid-19, human rights in Hong Kong and Xinjiang, and tensions over Taiwan.

While those issues aren’t going to be resolved in the meeting, the U.S. says it wants to put “guardrails” on the relationship so it doesn’t get worse. A recent joint announcement on climate change shows the two sides can still cooperate on certain issues.

Xi comes to the summit in a strong position, having cleared a major hurdle last week to securing a third term as Communist Party chief next year. And while Biden won passage of a key infrastructure bill, Democratic infighting and accelerating inflation have hammered his public support a year before midterm elections.

For markets, any signs that bilateral ties are improving may support investor sentiment. But the effect could be limited given wider concerns over a global surge in inflation and the ongoing impact of Xi’s “common prosperity” drive to tackle inequality.

With that backdrop, here’s what the two leaders may choose to focus on:

The U.S. and China are still far apart on economic and trade questions.

While an interim trade deal signed last year remains in force, the two sides dispute whether China is living up to its end of the bargain. The accord called for Beijing to make changes to regulations on intellectual property and other areas, and had specific targets for Chinese purchases of U.S. goods.

China’s imports from the U.S. nowhere near the agreed target 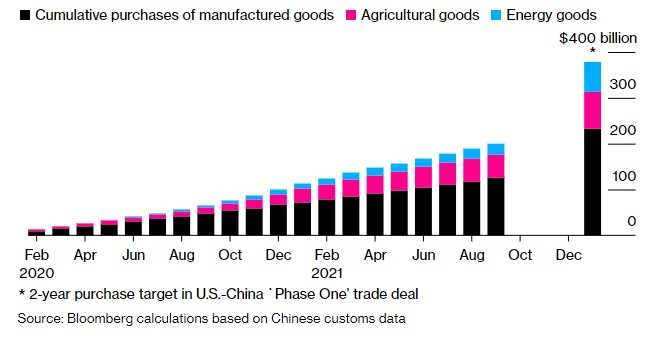 Bloomberg calculations show that in the first 21 months of the two-year deal, China has only bought half of the goods it promised to purchase. Yet Chinese exports continue to rise, hitting a new annual record in the first 10 months of this year.

The U.S. has also been flagging other concerns, including the impact of China’s “extremely robust and very effective industrial policies on our ability to grow, on our ability to compete, on our ability to thrive,” U.S. Trade Representative Katherine Tai said last week. “That is a larger conversation that we feel very strongly that we have to have.”

Tai is in Asia this week with Commerce Secretary Gina Raimondo, meeting officials in India, Japan, and South Korea. Biden and Xi could give the go-ahead for them to meet with their Chinese counterparts now or in the near future.

But Beijing has more recently signaled it’s willing to boost cross-border accounting cooperation. China’s securities regulator provided a proposal to the U.S. last summer on resolving the audit impasse. And China has slowly begun opening up its financial industry to overseas players.

JPMorgan Chase & Co. in August became the first Wall Street firm to get approval to take full ownership of a securities venture in China, just ahead of Goldman Sachs Group Inc. However, many U.S. companies including Visa Inc. and Moody’s Corp. continue to wait on the sidelines for approval. A positive outcome at the summit could benefit those firms. 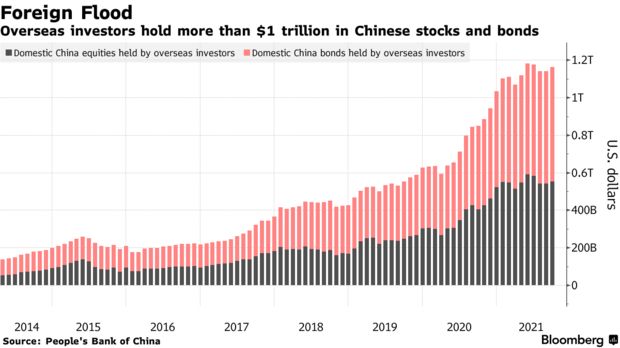 Students, journalists, officials and Chinese Communist Party members have all been caught up in visa restrictions imposed by the two countries.

China has been pushing back, with journalists expelled or forced to leave and return on short-term visas. This is one area where the two leaders could decide to call for a truce.

The U.S. has sanctioned Chinese officials and goods over Beijing’s treatment of Uyghur Muslims in Xinjiang and its imposition of a national security law in Hong Kong, drawing reprisals from China. Beijing also penalized U.S. officials who “acted egregiously” with regard to Taiwan and American companies for selling weapons to the self-governed island.

It’s unlikely either side will back away from already imposed sanctions and blacklists. But Biden has said he wants human rights at the center of his foreign policy, and he’s unlikely to pass on an opportunity to raise the issue with Xi.

While some of the more extreme measures taken in the Trump era – including a potential ban of apps like ByteDance Ltd.’s TikTok – have been watered down, Biden still has Chinese tech in his crosshairs. The global shortage of semiconductors has made U.S.-China tensions on technology even more acute.

Xi has made it clear that he wants his country to become self-sufficient in core technologies that have been dominated by the U.S. That includes everything from chip manufacturing to artificial intelligence. Washington wants to guard its own companies’ competitiveness and is increasingly vigilant that its know-how doesn’t find its way into the Chinese military’s hands – through forced technology transfer or hacking.

The self-governed island poses the biggest risk of a clash between China and the U.S. Claiming Taiwan as China’s territory, Beijing has increased military, economic and diplomatic pressure, including sending more than 200 planes into Taiwan’s air defense identification zone in October.

Meanwhile, America’s policy of “strategic ambiguity” toward Taiwan’s defense has been under scrutiny after Biden said the U.S. would defend the island if China attacks. U.S. officials said afterward that there’s been no change in strategy. But whether it was a verbal misstep or deliberate, the Chinese took notice – and Xi is expected to seek clarity from Biden.

Beijing is just weeks away from hosting the 2022 Winter Olympics. While some U.S. lawmakers have called for a boycott of the Games, Biden hasn’t embraced that argument. It’s highly unlikely the U.S. president would consider attending any part of the Olympics, but Xi could extend an olive branch by inviting the American president.