China’s central bank could provide a financial lifeline to Russia if Beijing decides to buck Western efforts to cut its strategic partner out of the global financial system.

The People’s Bank of China has a multi-billion dollar currency swap with Russia’s central bank, allowing the two nations to provide liquidity to businesses so they can continue trading. China has also signed Russian banks onto its homegrown payments settlement system, seen as an alternative to the SWIFT messaging system, which many Russian lenders will be banned from using.

It’s unclear whether that support will be forthcoming though, with the PBOC yet to disclose how it will respond to the Russia sanctions. It didn’t reply to faxed questions on Monday for more detail, including on the status of Russian foreign exchange reserves or the currency swap line. China is treading cautiously for now, with two major state-owned banks restricting financing for purchasing Russian commodities.

A Fistful of Euros

Russia has cut back on dollar holdings, boosted euro and yuan reserves 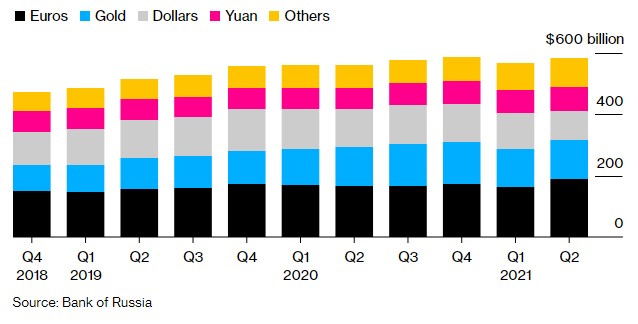 The biggest help to Russia could come from the yuan assets held in foreign exchange reserves. About 13% of Russia’s reserves, or an estimated $77 billion, were in Chinese assets as of June 2021, the most recent figures from the Bank of Russia. Selling off those holdings would give Russia much-needed liquidity.

“The Chinese assets and yuan in Russian foreign reserves can be an effective tool for Russia to counter the impact of U.S. and European sanctions,” said Yu Lingqu, vice director of the center for financial studies at China Development Institute, a state-backed think tank in Shenzhen.

Western nations announced restrictive measures freezing roughly half of Russia’s reserves held in Group of Seven nations. However, China didn’t sign onto those sanctions and the U.S., Europe and others can’t prevent Russia from accessing its reserves held in Chinese assets, according to the European Union’s top diplomat Josep Borrell.

Western nations “cannot block the reserves of the Russian central bank in Moscow or in China,” Borrell said over the weekend, noting that Russia has been preparing financially for this situation in the last few years by reducing dollar assets and putting reserves into euros and the yuan.

China is unlikely to follow Western nations to freeze Russia’s yuan assets, Yu said, as both countries “want to fight back against the U.S. and dollar hegemony in the global financial system.”

Beijing’s dilemma is how to aid its strategic partner Russia without breaking Western sanctions. President’s Xi Jinping’s government will have to choose whether it continues to give Russia access to those funds and China’s financial system, and whether it utilizes the currency swap arrangement between the two nations.

The swap agreement was signed in 2014 after Russia was sanctioned for invading Crimea and began trying to reduce it’s exposure to the dollar and the U.S. financial system. There’s little detail released about the agreement or explanation of how it’s been used in the past. However, the PBOC branch in Qingdao said in 2018 that it had facilitated a ruble loan using the swap, with Bank of China lending a local firm rubles so it could import Russian goods.

It remains to be seen whether that agreement will be enough to sustain a trading relationship worth almost $150 billion dollars last year.

The sanctions could also give a boost to China’s home-grown payments system for cross-border yuan transactions.

Launched by the Chinese central bank in 2015, the Cross-Border Interbank Payment System, or CIPS, is seen as a potential alternative to the U.S.-dominated global settlement system of which SWIFT is a part. Many Russian banks were cut off from SWIFT, the messaging system run by the Society for Worldwide Interbank Financial Telecommunication, and used for trillions of dollars worth of transactions.

CIPS has multiple local participating banks in Russia. However, its reach compared with SWIFT is small. The fledgling system only has 75 direct participating banks — mostly Chinese lenders — and 1,205 indirectly participating banks. In comparison, SWIFT has over 11,000 member institutions, and the yuan only accounted for 3% of payments through the system in January.

While CIPS provides messaging, clearing and settlement services, transactions through CIPS may still rely on messages sent via SWIFT if it involves banks that are not directly plugged into the CIPS system, according to Yu.

“There are opportunities for the international use of yuan and the CIPS, but we shouldn’t be blindly optimistic,” said Yu.

China gears up for Year of Tiger amid greater fiscal…