Global banks were allowed to control joint ventures they’d struck with Chinese partners. Morgan Stanley and JPMorgan finally eked out profits. The top six global banks made some $42 million in China last year — a pittance next to their earnings elsewhere, but a relief after many lean years.

Fast forward to 2022 and Covid-19 lockdowns, volatile markets and moves by President Xi Jinping to reshape the business scene — and reassert state control — have led some to reassess.

After hiring about 200 people in China last year, Credit Suisse is delaying plans to form a local bank and could let dozens go, according to people familiar with the matter. That bank, along with JPMorgan and UBS, recently shuffled senior executives in China.

Regulators have also warned big banks against rewarding their top talent too lavishly, or face running afoul of the Communist Party, according to people familiar with the matter. Executives were told to keep pay in line with Xi’s “common prosperity” agenda and avoid excessive income gaps.

How to lure and retain top talent while doing that? On pay, a first-year managing director at a Chinese broker can get about 4 million yuan ($600,000) in compensation. The bulge bracket Wall Street firms offer is 10-20% greater, while second-tier foreign banks struggle to match it, says Eric Zhu, head of financial services recruitment at Morgan McKinley. Senior bankers at local firms, which dominate deal making, can take home well above 10 million yuan, which foreign firms have a hard time matching, according to local headhunters. 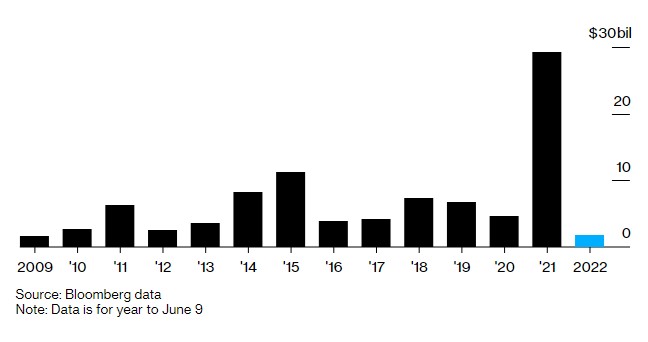 A top banking executive in the region said Chinese regulators have signaled Xi’s uneasy relationship with the West has, along with Covid, held up licenses and other necessary paperwork.

“Wall Street banks really need to ask themselves now, Why do I want to be in China?” said Veronique Lafon-Vinais, an associate professor at Hong Kong University of Science. “Are they truly profitable, what is the true return on capital for their China business?”

There aren’t many green shoots for the Chinese economy.

Despite an unexpected bump in industrial output and growth in fixed-asset investment, consumer spending continued to contract and home prices extended their slump. A record number of young people are out of work and joblessness in major cities surged to an all-time high.

Industrial output rose 0.7% last month, as car production centers such as Shanghai and Jilin slowly reopened. Many businesses are not fully operational and real-time truck flow data shows activity isn’t back to pre-lockdown levels. “We believe some fundamentals might be worse than the official data suggest,” say economists at Nomura, pointing to falling production of power, cement, crude steel, autos and smartphones.

Still, while China’s retail sales slid 6.7% as regular virus testing and Covid controls hindered consumer activity, people rapidly added to their savings, which grew by 7.86 trillion yuan ($1.2 trillion) in the first five months of the year, the most since 2005, according to the People’s Bank of China.

“We anticipate a recovery in the second half of this year as policy stimulus takes effect,” said Tommy Wu, China economist at Oxford Economics. However, “it will be difficult for household consumption to recover strongly. Consumer sentiment is unlikely to turn sanguine as dynamic zero Covid strategy remains in place despite the fine-tuning we’ve seen.”

But Chinese consumers are still wary 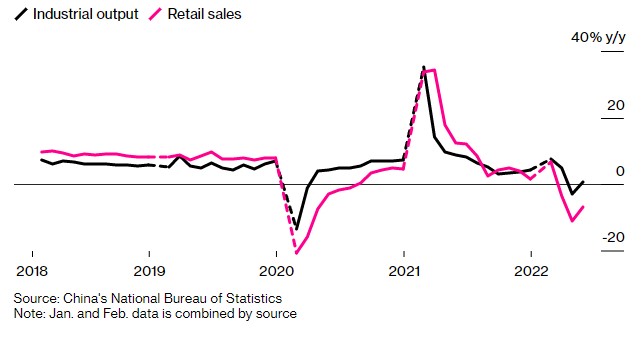 Beijing is reinstating restrictions days after initial easing as cases spike, while Shanghai has launched mass testing drives every weekend until the end of July, despite no more than a dozen or so cases a day.

Officials are betting the cost and disruption of regular testing are less than from a shutdown. Residents, however, are living with the constant threat of a building-specific lockdown if even one case is detected. That’s likely to further weigh on consumer spending, putting the government’s full-year economic growth target of 5.5% out of reach.

It sounds like a sinister plot in a science fiction novel, but it’s all too real.

A major Chinese manufacturing hub allegedly abused its Covid health codes to stop investors returning to the city to protest being swindled out of billions of dollars. Several people said their codes turned red when at the main train station of Zhengzhou, the capital of Henan province, meaning they couldn’t move about freely. They’d had green codes when they left home.

China uses a three-color health code system to track people who may have been infected by Covid. Red bars people from entering certain places or taking public transport, while green gives access. Users must scan codes at all public places. There were no risk areas in cities in Henan as of earlier this week, according to official data.

Such alleged misuse has caused a firestorm, adding to concerns the strict Covid restrictions imposed in mainland China and Hong Kong are doubling as a form of social control. Phone calls to the Zhengzhou city government and the local health authority went unanswered. An employee handling city government hotline inquiries told local media there was some error with their information database and the situation had been reported to the government for rectification.

Hundreds of protesters gathered outside the Henan office of China’s banking regulator in May, demanding authorities ensure the return of tens of billions of yuan invested in what could be one of the nation’s largest financial scams. Small-scale protests aren’t unheard of in China, but they’re rare enough to attract attention from authorities who prize social stability, especially in a crucial leadership year for the Communist Party.

It might not have been the first instance of health-code misuse. A human rights lawyer accused authorities of meddling with his health code to bar him from traveling, the New York Times reported earlier this year.

This time, the suspected practice has been universally condemned. Even former editor of the Communist Party’s Global Times newspaper said such manipulation jeopardized public support.

“If any local government tries to prevent the movement of certain people by controlling their health codes for other purposes, it’s not only a clear violation of Covid prevention rules but also jeopardizes authority of the system and the public’s support,” Hu Xijin posted on his Twitter-like Weibo account. “It’ll do more harm than good to our social governance.”

Forget about a US-China detente, it will only get worse from here.

That’s according to Silicon Valley venture capitalist Vinod Khosla, who predicts America will soon be in a “techno-economic war” with China for two decades.

The conflict will pit businesses shaped by each nation’s value systems — one inspired by democracy and the other by communism — against one another, Khosla said in an interview on Bloomberg Wealth With David Rubenstein. He sees tech investors playing an important role in deciding which country’s companies will succeed.

Concerns about China have been on Khosla’s mind for a while. He gave a talk to the National Academy of Sciences last year predicting a major economic war between the US and China and said it will involve espionage. He tweeted in February that the conflict will “determine the next century.”

Khosla, who co-founded Sun Microsystems, suggested parts of Africa and Southeast Asia would be molded by the ideology of the prevailing nation. “The countries leading in technology will have tremendous economic power and hence, political influence,” he wrote. “Likely this will be driven by innovation ecosystems, which means startups.”

Good feelings toward China in the West has fallen off a cliff, but not so in Africa — and importantly, not among young people there.

Three-quarters of young Africans across 15 countries named China as a foreign power with a positive influence on their lives, compared with 72% for the US, according to the Ichikowitz Family Foundation, which polled 4,507 young Africans. In 2020, when the inaugural study of 18-to-24-year-olds was conducted, 83% of respondents saw the US’s influence as positive while the figure for China was 79%.

The results are evidence China is winning the battle against the US and European Union for hearts and minds in Africans. Beijing has plowed money into African infrastructure over the past two decades and supplies the continent with affordable goods from mobile phones to solar panels.

In addition to its vast mineral and energy resources, Africa has the world’s most youthful population and is seen as a potential market for the future by countries ranging from France to India. Positive sentiment toward China was strongest in Rwanda, Malawi and Nigeria.

“We see China having climbed to pole position, we see a recognition of the fact that China is engaging in Africa at a time when very few others are,” said Ivor Ichikowitz, chairman of the foundation. “In Africa, America has played a very, very limited role, its actually played an embarrassingly insignificant role in terms of actual investment, actual trade, actual building of infrastructure.”

Still, China’s influence is not seen as universally positive. Of those surveyed, 56% said they believed the unverified conspiracy theory that Covid-19 was developed and spread by the Chinese government.