Hong Kong-listed shares of China’s big internet firms — including Tencent and Alibaba — mostly shrugged off news of a flurry of antitrust fines issued by the State Administration for Market Regulation (SAMR).

In the first salvo since the appointment of Gan Lin as the head of the country’s anti-monopoly bureau, Tencent Holdings Ltd. and Alibaba Group Holding Ltd. were each hit with more than 6 million yuan ($938,628) in penalties for 13 and 12 historic deals, among a total of 43 antitrust cases released by SAMR on Saturday. Each violation attracted a fine of 500,000 yuan.

More than four-fifths of the offending deals came from the internet sector, and some could go back as far as a decade. Meituan, JD.com Inc., and Baidu Inc. were ordered to pay 1.5 million yuan each while ByteDance Ltd. was fined 500,000 yuan. Troubled retailer Suning.com was also fined, as was logistics firm Best Inc. and insurance giant China United Insurance Group Co. Ltd. 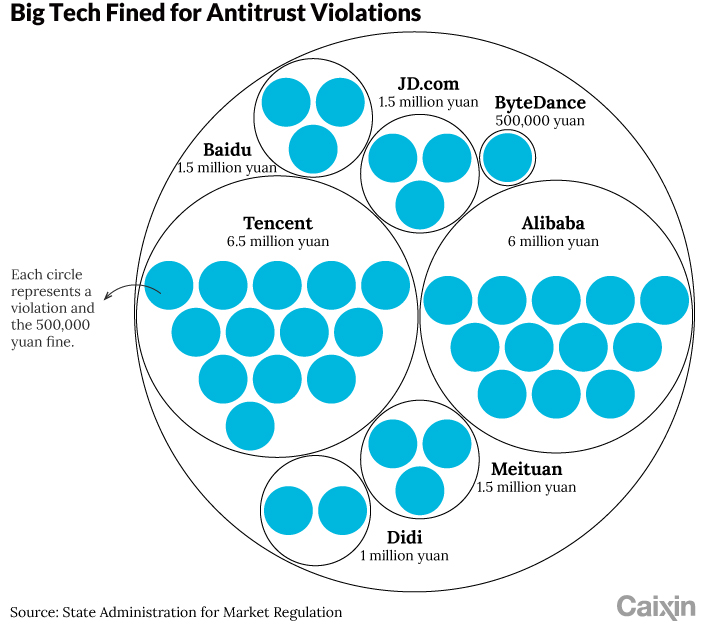 This round saw the most antitrust cases since SAMR issued its first series of fines in December 2020. The list has grown over four rounds to 87 cases, amid the nation’s ongoing crackdown on monopolistic behavior.

The regulator found that the deals violated Article 21 of China’s Anti-Monopoly Law, which urges companies to notify the regulators if they reach a concentration in the market.

Shares of JD.com closed up around 2% on Monday. However, four other Hong Kong-listed tech companies’ stocks all dropped slightly, led by Meituan down by about 2.5%. Alibaba dropped 1.6%, and Tencent was down 0.3%. The Hang Seng Internet and Information Technology Index also fell 0.99%.

Shares of Hangzhou-based Alibaba had already plunged 10.7% on Friday after it posted a weaker-than-expected September quarter result, in which its net income plummeted 87% year-on-year.

One case in this latest list dates back to 2013 when both Alibaba and Tencent purchased stakes of a cybersecurity firm, resulting in both internet giants owning more than 75% shares together, according to a separate statement (link in Chinese) by SAMR.

Alibaba was also fined for acquiring the web-mapping and navigation developer AutoNavi Holdings Ltd. in 2014, phone recycler Huishoubao in 2018, as well as Baidu’s take-out food delivery platform in 2017.

China’s government is waging a sprawling crackdown on monopolistic behavior in the country’s freewheeling internet industry, most notably slapping Alibaba with a record fine of $2.8 billion in April.

On Thursday, SAMR issued guidance for domestic companies to step up awareness of overseas anti-monopoly compliance. This was followed a few days later with the State Council’s appointment of Gan Lin to lead the country’s new anti-monopoly efforts. Gan, 58, has been involved in several high-profile anti-monopoly cases in the internet sector this year, several sources told Caixin.