Chinese stocks dropped on Wednesday, with liquor makers driving the declines following a recent rally on the back of price hikes.

The benchmark CSI 300 Index fell 1.5%, the most since Dec. 20, leading losses in Asia amid thin year-end liquidity. A sub-index of consumer staples slumped 4% in its biggest drop since mid-October as baijiu distillers Kweichow Moutai Co. and Wuliangye Yibin Co. plunged more than 4% each.

Jolted by Beijing’s wide-ranging crackdown on private enterprise, debt troubles in the property sector and China’s economic slowdown, the CSI 300 has lost more than 6% in 2021 after a strong two-year rally. In the offshore market, a rout in Internet giants has seen the HSI measure tumble more than 15% to head for its worst annual showing since 2011. The MSCI Asia Pacific Index is down less than 4%. 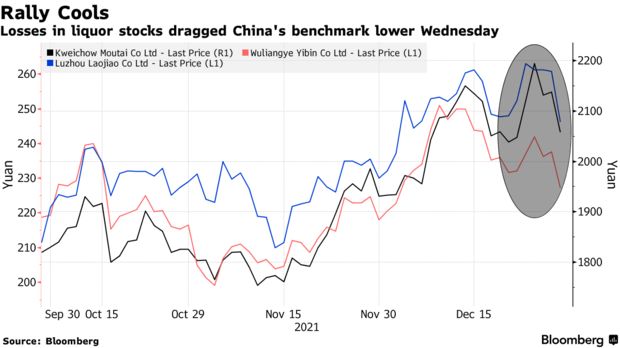 “Today the drop is mostly contributed by some blue chips, in particular the baijiu names. It’s likely that some funds want to cash out before the year-end after the recent rebound,” Zhang Gang, a strategist at Central China Securities Co., said of China equities. “Also, China Mobile Ltd. is listing in the A-share market soon and there might be some worries in the market about liquidity tightness.”

Asia in 2022: China’s reopening after Omicron, elections in the Philippines, inflation and climate change

Shanghai reveals its pilot for internet teenage mode as…

China ‘won’t be coerced by US’ on its ties…