JPMorgan Has $20 Billion at Stake as Dimon Jokes About China

But with nearly $20 billion of exposure in the world’s second-largest economy – and big ambitions to expand even further – the U.S. bank has a lot riding on maintaining cordial relations with a government that’s sensitive about anything that might be construed as questioning its legitimacy.

Wall Street banks have billions of dollars in exposure to China 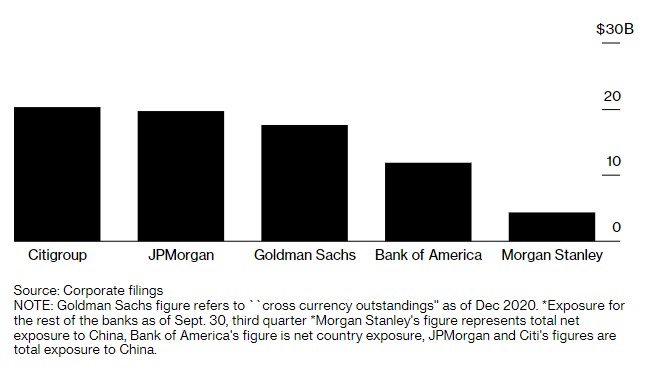 In a sign that JPMorgan is attuned to the risk of blowback, members of the bank’s government relations team and China offices had internal discussions about Dimon’s remarks after he spoke at a panel discussion on Tuesday, according to a person familiar with the matter.

While some executives expressed concern that the joke could be viewed as insensitive, the government relations team told the group that Dimon intended to stress the longevity of JPMorgan’s China business rather than criticize the party. As of midday Wednesday in China, the bank hadn’t communicated with local government officials on the issue, the person said, asking not to be identified discussing private information.

Chinese media, often quick to criticize perceived slights against the country by international companies, have yet to cover Dimon’s joke about the Communist Party even as they wrote about several of his other comments on cryptocurrencies and U.S. policy risks.

“We hope to be there for a long time,” Dimon said of China while speaking at the Boston College Chief Executives Club. He also relayed a joke he made during a recent visit to Hong Kong: “The Communist Party is celebrating its 100th year. So is JPMorgan. And I’ll make you a bet we last longer.”

JPMorgan earlier this year became the first Wall Street bank to gain full ownership of a securities venture in China and has said it is investing 2.67 billion yuan ($410 million) in China Merchants Bank Co.’s wealth management unit. The bank’s total exposure to China stood at $19.7 billion as of September, mainly from lending and deposits, trading and investing, according to a regulatory filing.

Beijing has a history of taking action against companies and individuals that appear to slight the government or challenge its policies, particularly on sensitive issues including Taiwan, which Dimon also referenced on Tuesday.

In 2019, UBS Group AG came under pressure to fire its chief economist, Paul Donovan, after he made a comment about a “Chinese pig” in a note about rising consumer prices. He later apologized, saying it was “innocently intended.” China broke off relations with Norway for several years after dissident Liu Xiaobo received the Nobel Peace Prize.

China’s financial markets are a potent lure for the world’s biggest banks, with billions of potential profits on the line in investment banking and wealth management. Wall Street firms are ramping up their presence the country despite elevated U.S.-China tensions and an increasingly opaque regulatory environment as President Xi Jinping cracks down on swathes of the private sector.