Labour shortages, excessive stimulus and large amounts of quantitative easing are coming together to create a global inflation cycle. The US dollar-renminbi peg creates artificial currency stability, which prevents the spiral of currency devaluation and rising inflation that emerged the 1970s and allows the US Federal Reserve and other major central banks to procrastinate in their responses.

This will further entrench the inflation cycle and pile up the risks down the road. If the dollar-renminbi peg breaks – which China could bring about deliberately as a strategic move – the consequences could be catastrophic for the United States. If and when that day comes, know that the Fed is responsible.

Inflation is surging in the US, where October’s 6.2 per cent year-on-year increase in the consumer price index was the highest in 30 years. US President Joe Biden’s political fortunes are suffering as voters fret over rising prices, and strong consumer reaction in the US is likely to lead to government action.

The Biden administration has asked Opec members to increase oil production, but to no avail. The US said this week it would release million of barrels of oil from its reserves, along with China, India, South Korea, Japan and Britain, in an attempt to bring down soaring energy and petrol prices.

The Fed, on the other hand, is sticking to its story that inflation is transitory, blaming supply chain disruptions such as congestion at ports and a lack of workers.

The Fed could soon start to further taper its monthly asset purchases, which are one of the primary drivers of current inflation levels. This quantitative easing is already baked into buoyant asset prices, though, and could trigger a sharper correction than in September 2019.

Considering how much influence speculators and elites have over Fed policy, it could be forced to stop midway through unwinding its quantitative easing and give inflation time to take hold. Businesses would have to raise wages to retain workers, potentially starting a wage-price spiral.

The US can avoid the vicious cycle of devaluation and inflation seen in countries like Turkey because the dollar-renminbi peg forces other major economies to hold down their currencies against the dollar. This has given it room to manoeuvre with regard to monetary policy and is a primary reason for the increased financialisation of the US economy over the past two decades.

This has been to China’s benefit. It increases outsourcing of manufacturing, which boosts China’s industrialisation, and corrupts the US ruling elite with massive gains in paper wealth. It will become advantageous for China to remove the currency peg at some point, though, and the conditions for that are coming to a boil.

China is slowly deflating its property bubble and coming to grips with its shadow banking system. Its financial system could be strong enough to withstand a stronger currency in two to three years. At that point, the US could be more vulnerable to a currency shock as its wage-price spiral grows more entrenched. 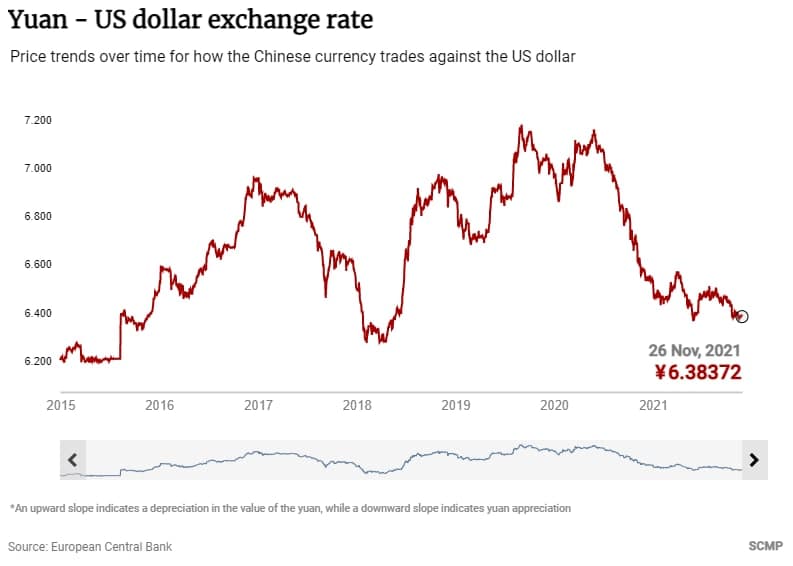 China could float its currency then, potentially pushing the US into crippling turmoil amid a spiral of devaluation and inflation. Beijing would gain significant freedom in international affairs.

The Fed’s loose monetary policy has weakened the US for decades, substituting competitiveness with cheap debt to sustain living standards. This can be seen in the country’s rising trade deficit and stagnant wages, leaving the underlying rot to continue to pile up.

The US system has not crashed because the currency peg channels the productivity of Chinese workers into supporting the US dollar. By letting inflation take hold, the Fed has given Beijing a chance to tip it over. It has not taken that chance because China is not yet strong enough to withstand a crash like the US saw in 2008.

Now that vegetables are becoming more unaffordable, people will eat fewer. Chinese people’s capacity for absorbing more hardship gives the government time to deal with inflation or use it to ease the pain of deleveraging.

A bubble bursting in slow motion might sound like an oxymoron, but Beijing can do just that because of its ability to manipulate market expectations. It can periodically convince the market that the government will not really burst any bubbles, encouraging speculators to hold on and avoid a stampede to safety. By the time speculators wake up, it will be too late to sell.

Beijing’s decision to deflate the bubble is driven by three factors. First, US-China rivalry has driven up the cost of a crisis, which would cripple the country’s ability to compete. The property bubble is already big enough to bring down China’s financial system, and further expansion would make it impossible to manage its deflation.

Second, oversupply in smaller cities means further stimulus will only go to Tier 1 cities. This will increase the gap between the haves and have-nots, contrary to government aims for “common prosperity”.

Finally, the property bubble’s usefulness is eroding. It is really a tax on housing to finance infrastructure construction and urbanisation, both of which have gone far enough already. Slowing down in this area won’t be so damaging for the economy. Rather, the bubble bursting is a big tax cut for the household sector and will benefit consumption in the long run.

In short, China is getting its fiscal house in order while the Fed lets inflation run rampant, increasing China’s leverage over the US. If the US wants to compete with China, it must start by changing the Fed’s approach.

From Bridgewater to Templeton, money managers warm up to unloved Chinese tech stocks