The Hong Kong compulsory pension scheme’s over reliance on Hong Kong and Chinese stocks proved to be its undoing in 2021.

As the Hang Seng Index and the Hong Kong-listed shares of mainland Chinese companies slumped to their biggest losses in a decade, the about 400 investment funds under the city’s HK$1.2 trillion (US$153.8 billion) Mandatory Provident Fund (MPF) last year recorded their worst overall performance in three years, according to Refinitiv Lipper data. In 2018, these funds reported a loss of 8.2 per cent on average. In 2019 and 2020, they reported gains of 12.7 per cent and 12.2 per cent, respectively.

“Overall MPF performance in 2021 was affected by the poor performance of Hong Kong equities,” said Kenrick Chung, general manager of employee benefits at Realife Insurance Brokers. “In 2022, there are still systematic risks – of the Covid-19 pandemic, China-US tensions, geopolitical risks and inflation – to be concerned about,” he said. Additionally, many central banks may increase interest rates this year to fight inflation, which will pose a risk to capital markets, Chung added.

The MPF allows members to choose how they allocate their contributions, in different funds that invest in stocks, bonds, currencies and mixed assets. Both China and Hong Kong equity funds last year reported their worst losses in 10 years, which hit many members hard as they are the most popular fund choices and represent a third of all MPF assets. 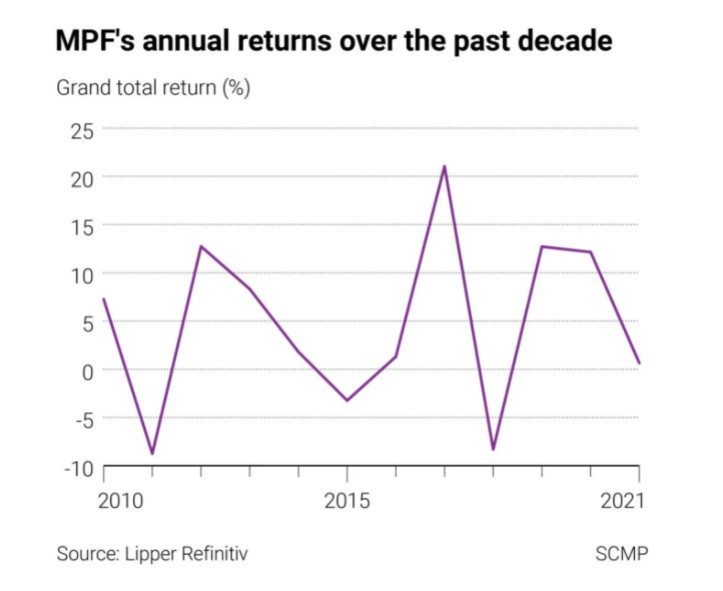 China stock funds, which invest mainly in shares of Chinese companies listed in Hong Kong, lost 19 per cent on average last year and were the worst performers among the funds tracked by Refinitiv Lipper. This was their worst performance since a 20.5 per cent loss in 2011. These funds gained 13.5 per cent in 2020.

MPF members investing in Hong Kong stock funds also suffered a 14 per cent decline, which was also their worst performance in 10 years, since a 19.8 per cent loss in 2011.

The Hang Seng Index fell 14 per cent in 2021, making Hong Kong the worst-performing market out of 92 major indexes tracked by Bloomberg. Only the city’s Hang Seng China Enterprises Index, which tracks the performance of Chinese companies, fared worse, retracing 23.3 per cent over the past 12 months.

BCT Group, an MPF provider, launched a new MPF US stock index fund in November that tracks both the S&P500 and Nasdaq 100. “While the US stock market has risen a lot in 2021, we believe it will continue to have more upside in 2022, as US corporate earnings and other market indicators remain positive,” said Bob Lee, BCT’s deputy CEO.

MPF members should, however, continue to invest in Asian equities, said Realife’s Chung. “If China can rectify its market, it will still be a major economic engine for the world. There are still many tools, both fiscal and monetary, that China can use to stimulate its economy,” he said.

“MPF members with a high-risk tolerance level can consider Asian equity funds, which cover Asia as well as China.”