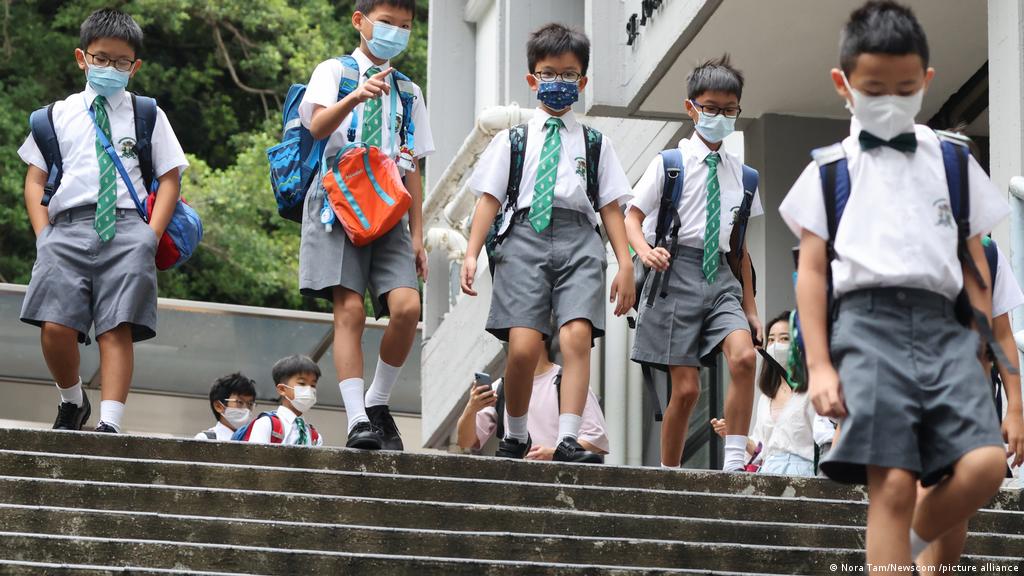 Hong Kong will suspend in-person classes for kindergartens and primary schools from Friday until after Chinese New Year, as the city reimposes pandemic curbs to stem an outbreak of the contagious omicron variant.

Covid-19 infections among young children prompted the move, Hong Kong Chief Executive Carrie Lam said at a regular press briefing Tuesday. The city will expand its vaccination program to children between the ages of 5 and 12, she added. Secondary schools will continue in-person classes, Lam said.

“We’re worried that some people don’t know that they’ve been infected.”

BREAKING: Hong Kong will halt primary and kindergarten in-person classes from Friday as schools see a rise of upper respiratory tract infections that have symptoms similar to omicron https://t.co/ZPS3MCxOEw pic.twitter.com/83XXUBTc3f

“It’s a very difficult decision to make,” Lam said, on closing some schools, “because on the one hand, we want to protect children from infection. But then if we suspend classes, we know there will be drawbacks in relation to their mental and physical development.”

The school closures are the latest in a raft of strict new pandemic curbs imposed over the past week as the city rushes to stop a local outbreak of the highly-transmissible omicron variant. Last week, Lam closed gyms, stopping dine-in services at restaurants after 6 p.m. and banned residents from returning from eight countries including the U.S., U.K. and Canada.

Acknowledging the economic impact of the curbs, she said details for a new round of anti-epidemic funding to support businesses affected by the latest round of social distancing rules would be announced Friday. The city’s anti-epidemic fund has about HK$4 billion ($513 million) remaining, she added.

Lam defended the city’s strict quarantine system that snatches healthy vaccinated residents from their homes, families and jobs for long stays in spartan government facilities after fleeting contact with a confirmed Covid-19 case. “Imagine if we did not have such a contact tracing and quarantine arrangement,” she said, referring to some quarantined residents who tested positive while in isolation, “And instead we left them in the community. Imagine the transmission would be way greater.”

Lam also said that a scandal-hit birthday party of some 200 guests, including dozens of government officials, was held at a restaurant that was clearly “beyond the capacity” of the number of people it could legally host.

She also criticized Cathay Pacific Airways Ltd., whose air crew brought in the infections that sparked the local omicron outbreak, for non-compliance with the city’s Covid rules. “We will take the legal action once we have the full evidence,” she said.

Delusional for US to overwhelm China and Russia by brute force: Global Times editorial