The Hang Seng Index dropped 0.5 per cent to 23,982.23 as of 1.45pm local time. The benchmark slumped 3.3 per cent on Monday to the lowest level since October 2020. The Hang Seng Tech Index lost about 1.4 per cent. Markets in mainland China are shut for the Mid-Autumn holiday.

Banks led the losses as traders took precaution, with Ping An Insurance falling 4.2 per cent to HK$49.20 and Bank of China (Hong Kong) tumbling 2.6 per cent to HK$22.45. S&P Global Ratings said Evergrande was on the verge of reneging on its debt.

“Evergrande’s default crunch and its contagion impact present a potential systemic risk to China‘s financial system,” Citigroup analysts Judy Zhang said in a report to clients on Tuesday. About 41 per cent of the banking system assets was either directly or indirectly associated with the property sector as of end 2020, they added.

Evergrande fell 4.4 per cent to HK$2.18 as investors await its plan to reorganise more than US$300 billion of liabilities after the firm last week hired outside financial advisers to tackle its debt burden. Citigroup mentioned Minsheng Bank, Ping An Bank and China Everbright Bank as lenders with the highest credit risks to the property sector. 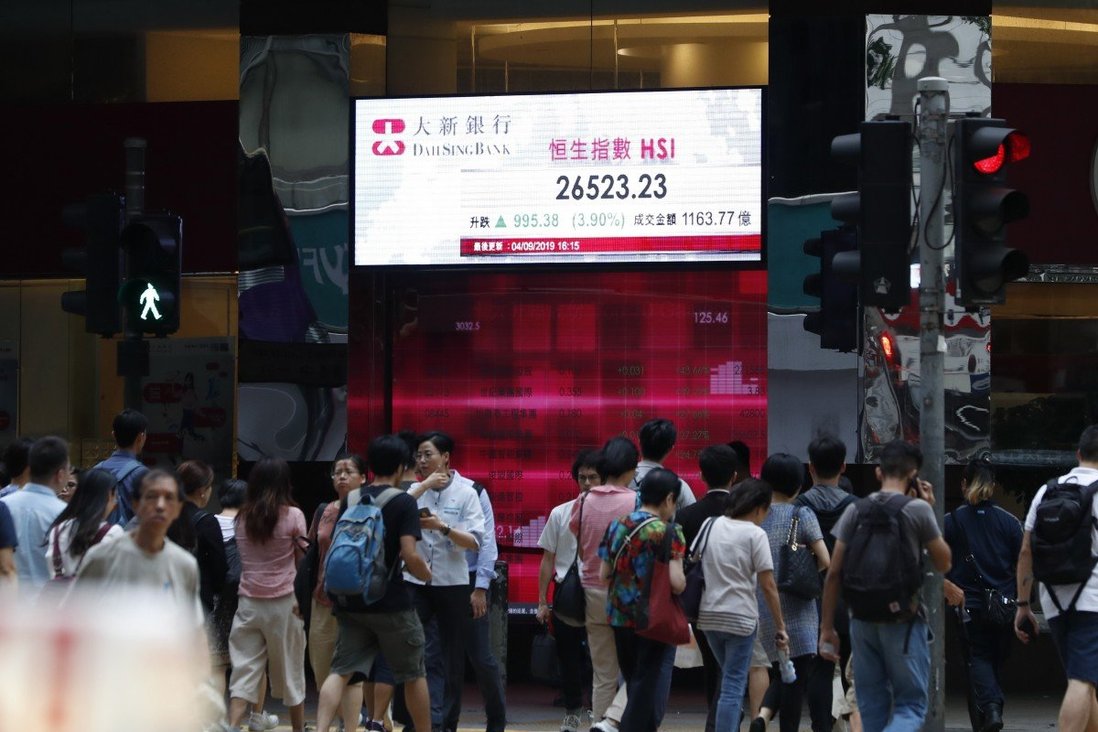 Chinese tech stocks also struggled, with Alibaba Group Holding, the owner of this newspaper, losing 2.3 per cent. Tencent Holdings, a favourite bet among mainland funds through Stock Connect, lost 1.4 per cent as the Southbound Connect remained shut for a holiday.

Gains in Chinese developers tempered losses as some unveiled efforts to raise cash amid a liquidity stress. Guangzhou R&F surged 6.3 per cent to HK$4.56 after proposing to sell assets to Country Garden for 10 billion yuan (US$1.54 billion). Two of its major shareholders also agreed to lend the firm HK$8 billion (US$1.03 billion).

Country Garden added 7.8 per cent to HK$7.06. Fantasia added 2.0 per cent after saying it has enough cash to repay bondholders next month.

The Hang Seng Property Index rose 1.6 per cent from a five-year low. The gauge plunged 6.7 per cent on Monday amid concerns Beijing will next target the richest landlords to help fix the housing shortage in the city. CK Asset Holdings was up 1.8 per cent. Sun Hung Kai Properties rose by 1.6 per cent, while New World Development advanced by 1.2 per cent.

Elsewhere, MGM China and Wynn Macau each climbed more than 3 per cent as concerns about tightening regulations in the gambling hub eased.

Markets in the Asia-Pacific region were mixed before the Federal Reserve meeting to decide on rate policy on Wednesday. Japanese stocks slumped 1.8 per cent while benchmarks in South Korea and Australia gained by more than 0.2 per cent.