Hong Kong’s benchmark stock index has delivered a total return of more than 230% since the handover in July 1997. That compares with 320% from the Shanghai Composite Index and 580% from the S&P 500 Index in the US.

The underperformance has accompanied Hong Kong’s shift from a venue dominated by local property developers, banks and utility giants to a place that’s now inextricably tied to mainland China and Xi Jinping’s vision for the nation.

The change has provided huge opportunities for investors tapping China’s economic ascent. But it’s also brought a cycle of booms and busts, and staggering risks that went under-appreciated until Beijing’s sweeping regulatory crackdown on private enterprise over the past year and half.

With onshore companies now accounting for two-thirds of stocks listed on the Hang Seng Index, and the Communist Party under Xi reasserting its hand in markets, here are some charts looking at how mainland firms have come to dominate the city’s stock market and what it means for investors.

Hang Seng Index has underperformed most peers since the handover

Hong Kong’s relative underperformance has been most acute since late 2020, when Chinese regulators suspended the listing of Jack Ma’s Ant Group Co. and began a crackdown on many of the tech giants that have made their home on the city’s exchange.

Three of the six-biggest stocks by market value today come from this sector, leaving it vulnerable to the push-pull of dictates from Xi, who wants Chinese companies to wrestle tech supremacy from the US while bending their business models to his “common prosperity” goal.

Highlighting the dangers for buy-and-hold investors, e-commerce heavyweight Tencent Holdings Ltd. has seen its market value slump from a peak of about $1 trillion last year to less than $450 billion.

The current turmoil isn’t a one-off for Hong Kong equities. PetroChina Co. suffered a similar fate to Tencent, going from $1 trillion market darling in 2007 to just $138 billion now after the government moved away from commodity-intensive development.

“Unfortunately, I would think that if we talk about Chinese technology companies in Hong Kong or just Chinese companies in general in Hong Kong, in my view, they will probably continue to go through the boom-and-bust cycle,” said Jian Shi Cortesi, a Zurich-based investment director at GAM Investment Management. 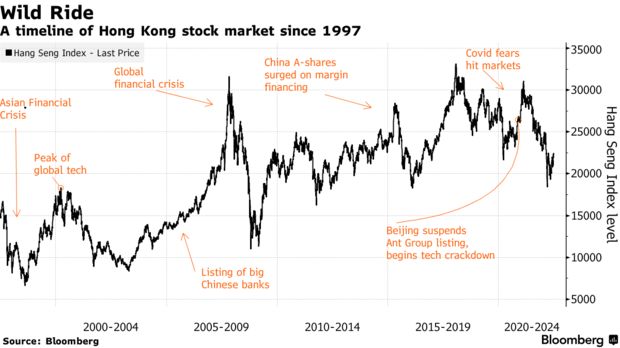 That said, she remains bullish on the long-term outlook and sees big opportunities in Hong Kong stocks, which have begun clawing their way higher again after reaching a nadir in March.

“We are seeing many companies trading at multi-year low valuations,” Cortesi said, adding that some had dropped as much 90%.

Hong Kong Exchanges and Clearing Ltd. Chief Executive Officer Nicolas Aguzin is also unperturbed. He expects China’s onshore equity and bond markets to more than triple to over $100 trillion during the next decade, bringing huge potential for the market operator to expand.

“We have a unique position that happens to be next to the world’s largest opportunity,” Aguzin told Bloomberg last month.

One of the bourse’s great successes has been the trading link between Hong Kong and Shanghai that was added in late 2014, followed by another one with Shenzhen in 2016. Domestic Chinese investors have since grown into a new force trading Hong Kong stocks, accounting for more than 10% of daily turnover.

This year under Aguzin, the stock exchange got Beijing’s nod to include exchange-traded funds in the stock connect program to tap demand for passive investments, starting July 4. 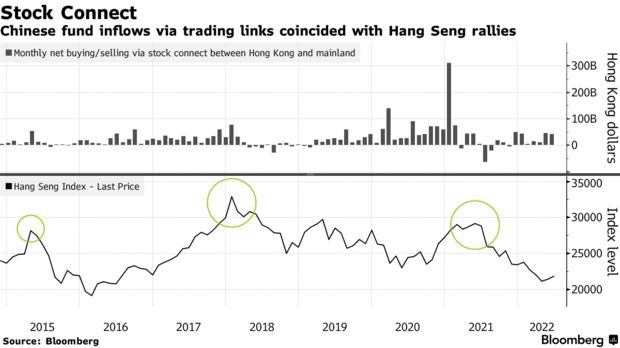 He’s also betting that more mainland companies will list in Hong Kong, and that Chinese companies forced off US bourses will shift to the city.

It isn’t playing that way yet though. The torrent of share sales that saw about 2,300 companies list in Hong Kong since 1997 has slowed to a trickle, Bloomberg data show. 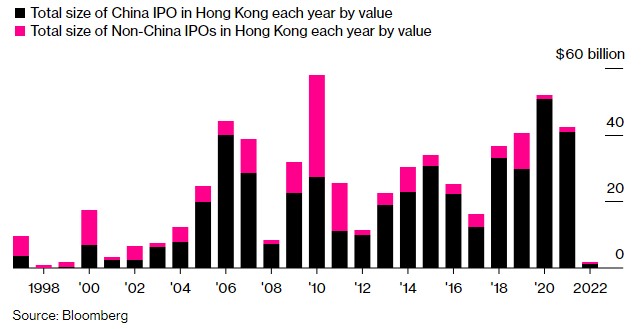 Money raised in new shares priced in the city since the start of January is down about 90% from the same period last year, compared with a drop of around 70% for IPOs worldwide and a 29% decline across Asian exchanges.

Meanwhile, activity in mainland exchanges has remained strong, with total proceeds raised up about 10% this year, according to the data.

“Long seen as the West’s window into China, a convenient but more predictable and safer base from which to conduct business, Hong Kong now increasingly serves China’s window into the West,” said Brock Silvers, chief investment officer at Hong Kong-based private equity firm Kaiyuan Capital. “The inextricable economic link between Hong Kong and the mainland carries benefit, but it also transfers risk.”

China should tighten its grip on video games that distort…

China Warns U.S. Will ‘Pay a Price’ for Boycotting Olympics