China’s campaign to tighten regulation across swathes of the nation’s industries is showing signs of abating, creating some relief among global investors. But there remains a number of unresolved issues that could yet have a wide-ranging impact on industries and financial markets alike.

The severity of the penalty for Didi Global Inc.’s controversial U.S initial public offering, the result of a corruption probe into China’s massive financial industry, and details of a planned expansion of property tax trials are just some of the potential concerns for investors.

China’s scrutiny over everything from technology to online tutors and real estate spurred a selloff that at one stage wiped more than $1 trillion from the value of the nation’s stocks globally. The MSCI China Index is down 15% this year, trailing global shares by the most since 1998. President Xi Jinping is seeking to remodel the economy, address inequality and reduce financial risk without destabilizing growth. 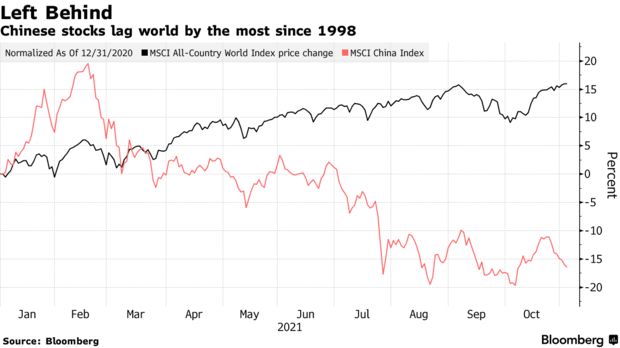 The following are some of the major focus areas for different industries as Xi’s crackdowns rumble on:

DIDI PROBE: Investors are awaiting the outcome of China’s regulatory investigations into ride-hailing giant Didi, logistics platform Full Truck Alliance Co. and online recruitment firm Kanzhun Ltd., following their U.S. listings earlier this year. Regulators are weighing a range of potential punishments on Didi, including a fine and the introduction of a state-owned investor, Bloomberg reported in July. The Cyberspace Administration of China suggested the three firms explore selling shares in Hong Kong, Dow Jones reported last month, adding that the probes may conclude as soon as November.

ANT IPO: What will happen with Ant’s IPO remains an open question, a year after Beijing quashed what would have been the world’s biggest debut. Bankers say they’ve stopped getting regular communication from the firm, and some are doubtful that it will return to market before 2023, Bloomberg News reported last month. On the brighter side, Jack Ma recently traveled to Europe, according to Hong Kong media reports, suggesting improving relations with the government.

BIG DATA: China has made clear that the government will play a central role in control of data and that private companies need to comply with Beijing’s priorities. Xi’s administration has debated a range of proposals, from nationalizing data under a government-controlled venture to setting guidelines for companies to manage their own data. The final decision will have sweeping ramifications for almost all technology companies.

BREAK DOWN SILOS: Efforts by Chinese officials to break open closed ecosystems operated by its biggest companies are being closely watched. Authorities are considering asking companies from Tencent Holdings Ltd. to ByteDance Ltd. to let rivals access and display their content in search results, Bloomberg News reported in October. Such a move could further pull down online barriers and shake up internet advertising.

OVERSEAS LISTINGS: Regulators in Beijing are still nailing down rule changes that would allow them to block Chinese companies from listing overseas even if the unit selling shares is incorporated outside China, using the Variable Interest Entity model. The move would close a loophole long used by technology giants to sidestep restrictions on foreign investment in sensitive sectors, although it’s still unclear what this would mean for VIE firms already listed offshore, particularly in the U.S.

HONG KONG IPOs: Companies planning to go public in Hong Kong may be exempted from first seeking approval from China’s cybersecurity watchdog, Bloomberg News reported in July. If confirmed, it would make the listing process for Hong Kong less onerous than for the U.S. The uncertainty over Hong Kong’s treatment is weighing on the city’s IPO market, which is going through a dry spell.

CORRUPTION INVESTIGATION: The top anti-graft body in October started a two-month inspection of 25 financial institutions including the central bank, the banking and insurance regulator, lenders and bad-debt managers. The probe will look at whether officials and banks were too close to private firms, including China Evergrande Group, Didi and Ant, the Wall Street Journal reported. The last major investigation into the industry was in late 2015 following a stock market crash, and resulted in the detention of bankers and brokerage executives, among others.

CROSS-BORDER BROKERS: The future of Chinese cross-border brokers is in doubt after a central bank official questioned the legitimacy of their operations, prompting declines in the shares of Futu Holdings Ltd. and Fintech Holding Ltd. The companies have been operating in a gray area by allowing Chinese investors to evade capital controls and trade shares in markets such as Hong Kong and New York.

REAL ESTATE TAX: Investors are keenly awaiting details of China’s plans to expand property-tax trials to more areas from Shanghai and Chongqing and to start taxing home owners. The plan, reported by Xinhua in late October, didn’t say where where the new trials will be applied to. Hainan, which is being turned into a free trade hub, and Shenzhen are considered among the likely candidates. While the five-year plan suggests a nationwide levy is unlikely to be rolled out anytime soon, concern over the potential impact of the trials has weighed on property stocks. One index of developers fell for seven straight days after the news.

TAXES/COMMON PROSPERITY: Xi’s “common prosperity” campaign poses a potential risk to makers of luxury goods such as Burberry Group Plc and Cie Financiere Richemont SA if it leads to stronger efforts to clamp down on conspicuous consumption. China’s tax system still favors the rich, meaning one way to redistribute wealth would be through higher taxes. The country is also one of the only major economies that doesn’t levy an inheritance tax. So far there has been little public sign that tax reforms are in the offing. Chinese consumers are the number one driver of global sales of top-end goods.

CASINO REVIEW: Macau’s government is considering regulations to tighten restrictions on operators, including appointing government representatives to “supervise” companies. The proposed changes could be made in a revision of the casino law, which will be passed before Macau issues new gambling licenses to operators. The current licenses expire in June next year. The sector could stay “nearly uninvestable” until there’s clarity on the new licenses, JPMorgan analysts wrote in an Oct. 1 note. 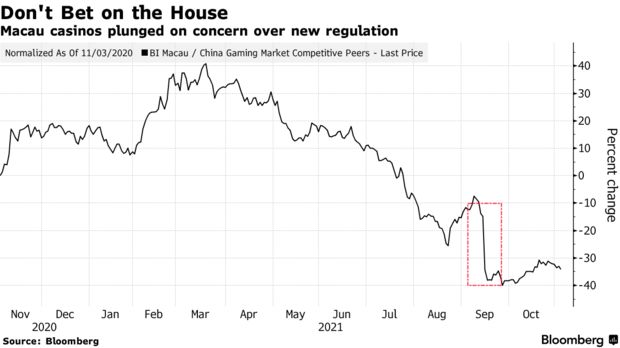 ANTI-SANCTIONS LAW: While Beijing will reportedly not impose an anti-sanctions law on Hong Kong for now, it remains a concern hanging over the city’s financial markets. The law is based on legislation passed on the mainland in June, which gives the Chinese government broad powers to seize assets from entities that implement U.S. sanctions. In August, China’s top legislative body postponed a vote on imposing the law on the former British colony, with one local delegate saying it had been delayed pending further study.

Chinese education tech firm to repurchase $10m of its shares

Jack Ma, Trump and Xi: How the Chinese billionaire flew close to the sun