Alarm over Xi’s regulatory crackdown gives way to fear of missing out.

Chinese equities, one of the most shunned asset classes among global investors this year, are regaining favor, with institutions from Fidelity to BlackRock tipping stocks again.

“The swiftness of this regulatory clampdown has led to a period of broad volatility and negative sentiment toward China,” said Paras Anand, chief investment officer for Asia Pacific at Fidelity. “It has led to many parts of the market looking oversold from a long-term perspective.”

The strength of other Asian markets this year contrasted with the weakness in China, he said.

“As we head into the fourth quarter and the early part of next year, we see a significant scope for recovery in Chinese markets,” Anand said.

Analysts at HSBC and UBS, two banks that are fast expanding in China, concur. The analysts changed their view on Chinese shares to buy from sell in late October. Nomura said it prefers China over India.

China’s CSI 300 Index rose 0.9% in October, its second consecutive rise after three months of declines. Net buying reached $5.1 billion by month-end, the most since May, through the Stock Connect scheme that links Hong Kong with Shenzhen and Shanghai markets. (The chart below shows data through Oct. 28.) Buying through Stock Connect accounts for about 70% of foreign portfolio flows. 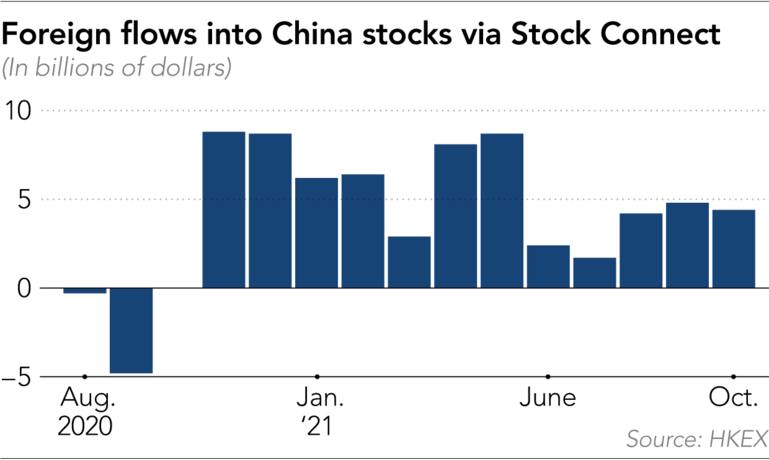 U.S.-listed Chinese companies have already rebounded. The Nasdaq Golden Dragon China Index, which touched an 18-month low Oct. 4, has climbed 13% since then.

The CSI 300, which tracks the most valuable shares traded in Shanghai and Shenzhen, dropped 6.9% in the July-September quarter, lagging the likes of the S&P 500, Japan’s Nikkei Stock Average and India’s Sensex. Investors reacted to Beijing’s intensified regulation and the liquidity crisis at property developer China Evergrande.

President Xi Jinping has cracked down on sectors ranging from technology to education with measures aimed at reining in the clout of billionaires and keeping consumer data onshore. At the same time, rules imposed on developers to curb excessive leverage are threatening to balloon out of control, having triggered financing difficulties or defaults at several developers including Evergrande, stoking fears of contagion across the $50 trillion financial system.

However, investors and analysts said some of the pressures are easing and have been priced into valuations. That should give way to fundamentals and corporate performance taking precedence, they said.

The value of shares in the world’s second-largest stock market averaged just over 14 times 12 months trailing earnings, compared with 17 times and almost 20 times for emerging markets and Asia-Pacific ex-Japan, respectively. In contrast, U.S. equities are trading closer to 30 times.

“We are modestly positive to upgrade Chinese equities to overweight as we see a gradual dovish shift in monetary and fiscal policy in response to the cyclical slowdown and anticipate that the regulatory clampdown will become less intense,” analysts at BlackRock Investment Institute said in a note dated Oct. 25. BlackRock this year became the first foreign-owned company to operate a wholly owned mutual fund business in China.

UBS upgraded its recommendation on Chinese equities to overweight from underweight in October, citing similar reasons. HSBC also followed with an overweight recommendation, which equates to a buy signal or recommending holding more than the weight enjoyed by Chinese stocks in global indexes.

Investors are focusing on the beaten-down technology, industrial and banking sectors. Among the diverse stocks that have attracted investor interest in the CSI 300 are Warren Buffett-backed battery and carmaker BYD – which has risen over one-quarter in October – along with Great Wall Motors, Ping An Bank and Tsingtao Brewery. 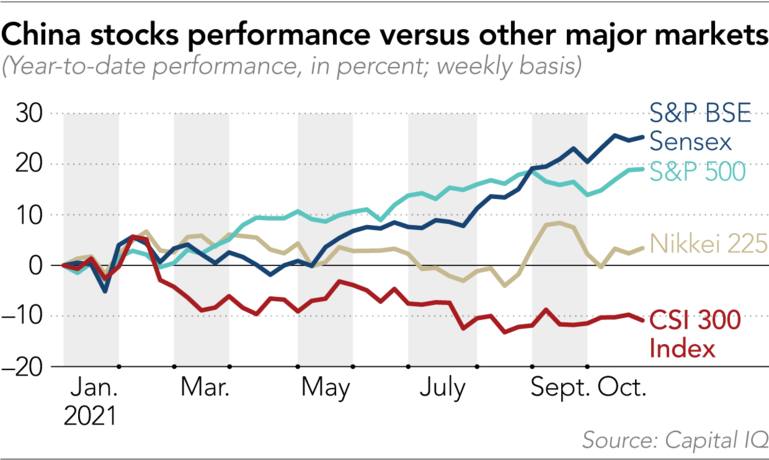 Alibaba Group Holding, listed in New York and Hong Kong, has risen 14.6% in October. The Jack Ma-founded company touched a record low in September, having ceded over $300 billion in market valuation in the past year. Ma, who has kept a low profile since China torpedoed the $39 billion initial public offering of Alibaba finance affiliate Ant Group at the last minute last year, was photographed taking a holiday in Europe, helping Alibaba’s shares.

Chinese authorities have signaled in recent weeks that they would loosen policies in order to stimulate the economy. They have told banks to boost mortgage lending to support the property sector, which contributes one-quarter of annual economic growth.

While global banks from Citigroup to Nomura have predicted China’s economic growth will miss the 8.2% consensus of economists’ forecasts for this year, People’s Bank of China Gov. Yi Gang recently said he sees about 8% expansion. He said the pandemic was under control in the world’s second-largest economy and that the growth trajectory “remains unchanged.”

Not everyone is on board. Credit Suisse strategists Dan Fineman and Kin Nang Chik in a recent note predicted waning economic growth and steady policy rather than easing among reasons for remaining underweight on Chinese stocks.

But some investors are warming to China after their alternative bet on India has more than played out. India’s benchmark BSE Sensex has climbed 24% this year.

Over the past five years, the main share indexes of the two nations have often moved in opposite directions. With Chinese stocks never this cheap versus their Indian peers, some predict a reversal could be in the cards.

“We now see an unfavorable risk-reward given valuations, as a number of positives appear to be priced in,” Nomura analysts said, explaining their recent decision to downgrade Indian equities to the equivalent of a hold from buy.

“We like China, a significant underperformer seeing stabilizing sentiment, and ASEAN,” they said, referring to the 10 members of the Association of Southeast Asian Nations, which are reopening their economies.

HSBC’s Herald van der Linde, the head of equity strategy for Asia-Pacific, said investors should buy Chinese stocks now, as they are inexpensive compared with Indian and U.S. peers.

“We think the baby is being thrown out with the bathwater” and good stocks are there for the taking, he said. “As growth is slowing, we expect Beijing to introduce more targeted easing measures in the coming months.”

The bank suggests that investors buy developers including China Resources Land and Longfor Group Holdings, but warns that the fallout from Evergrande’s troubles may weigh on prices in the near term.

Due to NIO’s Production Line Upgrading, Delivery of Some EVs Scheduled for October Gets Postponed