China’s growth will slow to 3.2% this year as the economy reels from the impact of a property market crisis and President Xi Jinping’s strict zero-COVID policies, economists and analysts say, ahead of a key Communist Party leadership meeting this month.

The world’s No. 2 economy is set to expand between 2.2% and 4.1% in 2022, with the average forecast coming in at 3.2% among 31 respondents to a written survey conducted jointly by Nikkei and Nikkei Quick News in September.

The fresh results mark a steep drop from the average 4.1% growth prediction in the June survey and 5% in the March poll, and are well short of the government’s official target “around 5.5%” unveiled earlier this year.

But respondents had an average forecast of a 3.2% on-year expansion for the three months ended September, well above the 0.4% growth that China’s economy eked out in the second quarter as citywide virus lockdowns in many places took a toll.

Survey respondent Tommy Xie, head of greater China research and strategy at OCBC Bank, pointed to a “modest recovery picture” in the third quarter. “The economy is likely to be supported by three factors in Q3, including a rebound in car sales and production, thanks to supportive policies, resilient manufacturing investment and output, and strong infrastructure investment,” Xie said. “However, there is no evidence of a turnaround in the property market, and sales in ‘golden September’ also disappointed,” he added, referring to public holidays when consumption and travel typically jump.

But eight of the 31 respondents pegged China’s growth to come in below 3% this year, with a rate of 2.6% and 2.7% forecast by economists at Barclays and Societe Generale, respectively.

Francoise Huang, senior economist for Asia-Pacific at Allianz Trade, cut her 2022 growth forecast to 2.9% from an earlier 4.1% and her 2023 forecast to 4.5% from 5.2%. Huang cited weaker exports and “the likely continuation of the zero-COVID policy until Q2 2023, which is weighing on business and household confidence,” as well as “risks in the property sector.”

China’s property market was hit by a wave of bond defaults among debt-swamped developers that has left scores of residential properties unfinished. That sparked a nationwide mortgage strike among angry homebuyers and triggered a collapse of confidence in the sector, which accounts for about a quarter of the country’s gross domestic product. 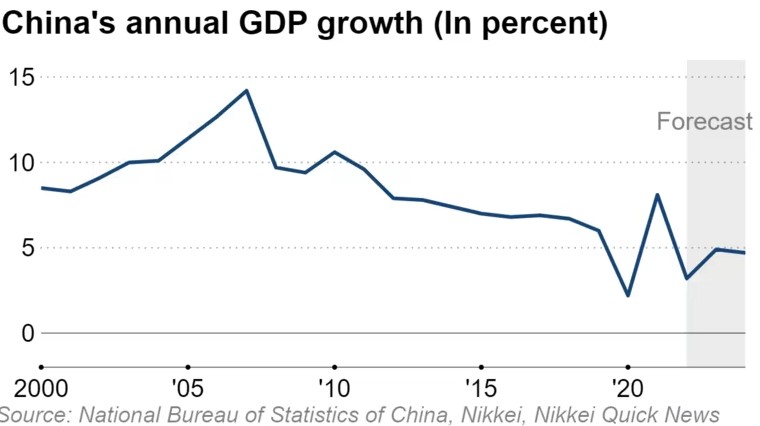 The gloomy predictions come before the Oct. 16 start of China’s twice-a-decade Communist Party congress, where Xi is expected to cement an unprecedented third term as the country’s leader.

For next year and 2024, the surveyed economists had an average forecast of 4.9% and 4.7%, respectively, a pessimistic view that sees China falling below its estimated potential growth rate of between 5% and 6% for three consecutive years.

When asked what are the key economic challenges for China this year and in 2023, the majority of surveyed economists cited Beijing’s “COVID-control policies” and the “sluggish” housing market, followed by “weak consumer confidence” and “weakening export demand.”

“We see risks mostly tilted to the downside with the ongoing COVID-19 uncertainty and lack of a timely and sizable housing market stabilization plan,” said Jing Liu, HSBC’s chief economist for greater China.

While Chinese authorities have vowed to stabilize the housing market and help get unfinished projects completed, the real estate sector “remains the weakest link of the economy,” said Julius Baer economist Sophie Altermatt. “Default fears and risks of project noncompletion weigh on confidence in the property market and, at the same time, housing demand is dampened by weak consumer sentiment,” she added.

KGI Asia’s China economy analyst Ken Chen warned that the “property market bubble is already on the verge of bursting.”

“Once the bubble bursts, the economy will have a hard landing, and it will also make it difficult for the economy to recover in the medium and long term,” Chen said.

Few see much chance of an early end to China’s strict virus curbs, with some expecting the policy to stretch into 2023. “There could be some marginal adjustment in China’s border restrictions after the 20th Party Congress, such as further reduction in quarantine time, but I do not expect to see any material change … soon after the party congress,” said Dong Chen, head of Asia macroeconomic research at Pictet Wealth Management.

Meanwhile, China has rolled out dozens of fiscal and monetary easing measures in recent months to prop up the economy, but they are having a limited impact, the economists said. The “magnitude and breadth of the announced support measures have been less than what we expected,” said Irene Feng, China economist at Credit Suisse.

When asked what will likely be the next Chinese leadership’s top policy priority after the party congress, 10 of the 18 economists who responded to this question pointed to “self-reliance in science and technology.”

“Significant resources are being devoted to this effort … [as] the geopolitical situation deteriorates and China seeks to insulate itself against any unexpected disruptions,” said Chris Kushlis, chief of China and emerging markets macro strategy for T. Rowe Price.

Atradius economist Bert Burger was critical of that strategy. “It would be wise to focus on the increased inequality of wealth in the country, but the current leaders are focusing more on China’s geopolitical role in the world.” he said. “Self-reliance in science and technology will be counterproductive for raising China’s productivity growth rate.”

The second most frequent response for the new government’s top focus was “dual circulation,” referencing domestic market policies, followed by China’s “common prosperity campaign,” which aims to narrow the inequality gap. “As mainland China’s economy is increasingly driven by consumption and [the] services sector, the internal circulation will be playing a key role in expanding the domestic market, moving up the value chain, accelerating household income growth and promoting urbanization,” said Bank of East Asia chief economist Ricky Choi.