Dealing with the dilemma of the Chinese market

The Federation of German Industries (BDI), Germany’s leading business group is worried. “China is one of the most important markets worldwide,” said Friedolin Strack, head of the Department of International Markets at BDI, during an interview with Nikkei. “But it is difficult to partner with a powerful nation like China.”

He explained that there is too much business in the Chinese market at risk for individual companies to speak out on human rights issues.

Companies’ distress is spreading. In Bordeaux, France in November 2021, local authorities halted plans to expand the floor space of a Zara fashion retail outlet. The reason was China, specifically its cotton production methods.

Zara operator Inditex, Spain’s largest apparel company, is suspected of illicitly profiting from cotton grown in China’s Xinjiang region, where the Uyghur minority is being forced to labor in cotton fields and factories. The company has appealed the decision by the Bordeaux authorities, but has not said much in its own defense for fear of angering China. Other apparel companies have faced boycotts in China after expressing concern about the Uyghur situation, apparently making Inditex reluctant to outline its own position.

On top of that, the U.S. and some European countries announced diplomatic boycotts of the Beijing Winter Olympics. “Mistaken actions will require compensatory payments,” said Wang Wenbin, deputy director of China’s Foreign Ministry Information Department, in a less-than-opaque hint at retaliation for the Olympic boycott.

China is looking to surpass the U.S. as the main actor on the global stage. A “Great China” that operates on a different logic from the Western-led world order is coming to the fore. But if companies get too close to the new China, they risk angering others, both at home and abroad. On the other hand, if they anger or ditch China, they lose its massive market of 1.4 billion people.

China, which has a limited number of allies, faces the same dilemma. Hence, the only way to win over the world is for the country to wield its power, both directly and implied.

“StarTimes Media has excelled under the digital broadcasting industry,” said Stephen Mutoro, Secretary General of the Consumers Federation of Kenya, during a visit to the newly established office of Chinese TV station StarTimes.

China is not just targeting businesses and nations. “A fox is now placed in charge of watching the sheep,” said Peter Dahlin, director of the international human rights group Safeguard Defenders, at the annual meeting of Interpol in Turkey on Nov. 25, 2021. Dahlin was angry over the selection of an official from China’s Ministry of Public Security as a member of Interpol’s Executive Committee.

Three of the United Nations’ 15 specialized agencies — international organizations deemed of great importance by the body — are led by Chinese nationals, including the International Telecommunication Union. There are concerns that growing Chinese financial contributions to these organizations are changing their policies and operations. The heads of the World Health Organization and the International Olympic Committee have also drawn criticism for being biased toward Beijing.

The growing friction highlights the limits of China’s soft power.

When Australian think tank Lowy Institute recently evaluated the “national power” of 26 countries and regions in the Asia Pacific region in eight areas, China, which placed second overall, saw its score drop for the first time since 2018. The U.S., ranked first, was far ahead in “cultural influence.” 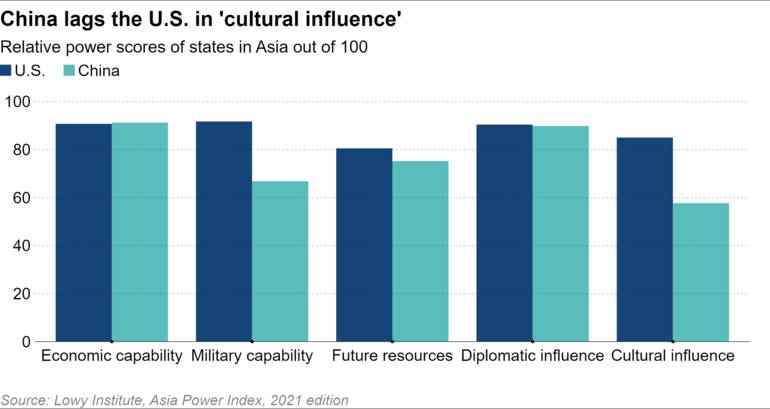 Chinese companies that have entered global markets are at a turning point.

Wang Jianlin, chairman of the Dalian Wanda Group who aimed to become the “king of movies,” was one of the first to run into trouble. In a challenge to The Walt Disney Company in the U.S., he acquired a string of major U.S. film production companies and cinema chains. But he was forced to sell many of his overseas assets after Chinese authorities became alarmed about his rapidly growing debt.

Wang then focused his efforts on creating Yan’an Red Street, a theme park in Yan’an, Shaanxi Province, where visitors can relive the history of the Communist Party.
Yan’an is sacred ground for the Communist Party. Led by Mao Zedong, the party reached Yan’an after its Long March, a trek of more than 10,000 km the communists undertook to escape the Kuomintang, a revolutionary party of China that eventually split with, and was defeated by the communists. The theme park attempts to reproduce the feel of that bygone era, and includes souvenir and clothing shops, as well as restaurants and theaters.

“Our generation has never experienced the hardship of revolution, so I want to study the history and understand it,” said Liu, a 30-year-old office worker from Xi’an. She spoke excitedly in December 2021 in front of a theater depicting the Long March and the civil war against the Kuomintang. She is currently applying to join the Communist Party.

However, Yan’an is also known for its large temperature swings. When Liu was at the theater the temperature was below freezing and only a few people were there.

Not everyone is interested in the party’s history. “Communist Party education? I’m not particularly interested in that,” said Guo Zhijie, 30, a man who lives near the facility. He was visiting with his wife and child, but was mostly “just wandering around the stores.”

Moreover, Chinese President Xi Jinping’s zero-COVID policy is making the situation worse. “It’s cold, and the number of COVID cases is rising,” said Zhan Hui, a 30-year-old restaurant worker at the park. She shrugged, adding, “There are hardly any visitors.” Before the pandemic, many civil servants and employees of state-owned enterprises used to come to the city for training.

China has massive pull, attracting people, goods and money, but it is still undergoing major transformations. Citizens and companies often get lost in the “Great China.” Dalian chairman Wang, who once said he would “keep some distance from politics,” is now aligning with the Xi administration. The more inward-looking China becomes, the wider the gap with the rest of the world will become.

State-run Xinhua News Agency is China’s main information platform outside the country. It celebrated its 90th anniversary in November 2021. Xinhua’s primary role is to disseminate China’s views to the international community, and occupies an important place within the country’s state-run media groups. Some of its overseas reporters are “non-writing reporters” who are mainly tasked with gathering information for the Chinese government. In many ways, they are the vanguard of the “Great China.”

Xi emphasized the importance of Xinhua in a letter he sent to the agency during last year’s anniversary: “You must make greater efforts to communicate with the outside world and work toward becoming a world-class new media organization, as well as make greater contributions to the realization of the ‘Chinese Dream’ of the great revival of the Chinese nation.”

The president wants Xinhua to break the dominance that U.S. and European news organizations hold, in part to counter news reports that are critical of China. 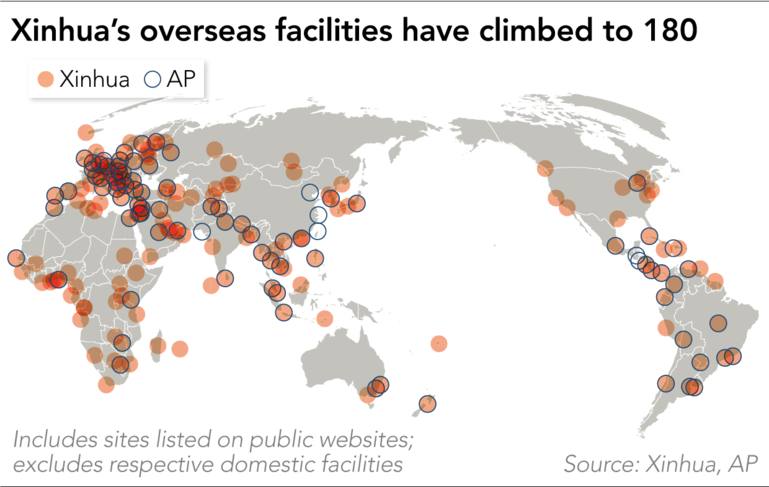 The agency is not lacking funds. According to data from the U.S. Justice Department, Xinhua spent about $9.5 million on operations in six U.S. cities during the year ended May 2021. In 2011, Xinhua made a splash with a huge electronic ad in Times Square in New York City.

Together with the party’s English-language newspaper, China Daily — which invests over $5.2 million a year to advertise and promote the party in the Los Angeles Times and other U.S. media outlets — the CCP is increasing its overseas reach.

Xinhua in principle is required to have a base in every country with which the Chinese government has diplomatic relations. It has about 220 facilities, including those in China. Of these, the number of overseas branches has increased by 80% since 2007 to about 180. Its network has spread not only in Europe and the U.S., but also throughout Africa, the Middle East and Latin America. As of 2020, it had over 12,000 staff, including 4,000 reporters.

Xinhua has reached roughly the same scale as The Associated Press, which has about 250 offices, and Reuters, with about 200. In 2019, the International Olympic Committee recognized Xinhua as one of the four official international news organizations, placing the company in the same tier as the three major wires services: AP, Reuters and Agence France-Presse.

It is also highly placed among China’s state media organizations. While the head of the state-run China Central Television is treated as a vice minister, the head of Xinhua is considered to be equivalent to a cabinet-level minister.

Much of the information it cranks out resembles Communist Party news releases. The majority comprises stories that put a positive spin on China, such as reports about economic growth or the success of individual companies. For its domestic audience, it often highlights stories about the failings of Western democracies, such as protests by supporters of former U.S. President Donald Trump.

All articles are also subject to strict internal checks. “The policies and ideology of the Communist Party have to be translated accurately. If there is a mistranslation, the person in charge will be fired,” according to Japanese staff at Xinhua’s Tokyo office.

There are also reporters at Xinhua who do not write articles. It is an open secret that Xinhua is both a media organization and an intelligence agency. Xinhua reporters use special computers for writing their stories, according to a person familiar with the system. One function routes their text through Xinhua headquarters in Beijing to Zhongnanhai, where important Chinese officials work.

The content of these reports ranges from the views of key figures in other countries and trends in public opinion on China, to sensitive matters like foreign politicians that China should prioritize.

Depending on the topic, Xinhua reporters can sometimes obtain better information than Chinese diplomats. The Communist Party and the Chinese government use Xinhua as a major information-gathering network, on par with the Foreign Ministry and the People’s Liberation Army.

However, as a state-run media outfit in an authoritarian country, Xinhua faces limits on its soft power. According to an analysis by the University of Houston of news stories in 30 African countries from January to May 2020, reports from AFP were picked up 10 times more often than those from Xinhua, with Reuters’ reports being used five times more often.

In the U.S., the Justice Department identified Xinhua as a political organization and an agent of a foreign power. In May 2021, the company was registered under the Foreign Agents Registration Act and required to disclose its budget and other information.

As the face-off between the U.S. and China grows more intense, Xinhua and other Chinese media outlets are becoming more careful of their activities abroad.