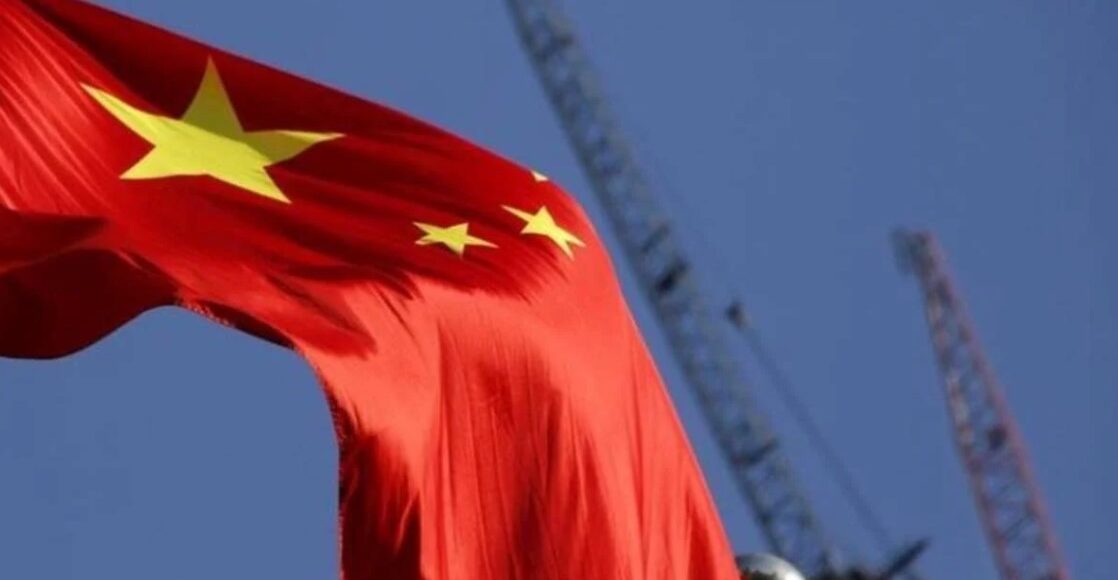 Chinese stocks saw a reversal of fortune this week versus global peers as investors tiptoed back into the market, betting an expected lift of Shanghai lockdowns would spur a rally.

China’s benchmark CSI 300 Index rose 2% this week, standing out within a global sea of red. It’s also outperformed major peers for the month so far. Driving the turn in sentiment has been China’s stabilizing Covid-19 outbreak, which helped soothe worries that movement restrictions may intensify.

“We don’t get so greedy as to try to time the market for the rock bottom,” said Yang Wei, a fund manager at Longwin Investment Management Co. “Valuations for some are now attractive enough to take the chance,” added Yang, who’s been building back equity positions since late March. 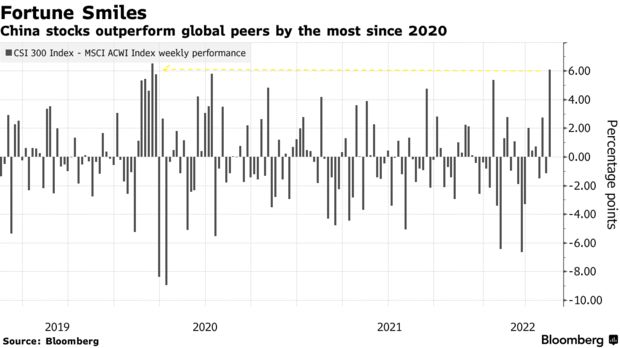 The CSI 300 Index had its worst January-April period since 2008 with a 19% loss, hammered by lengthy lockdowns in major cities as well as the Federal Reserve’s aggressive rate hikes. Come this month, the Chinese benchmark has fallen the least among the world’s major national indexes so far. The smaller tech-heavy ChiNext Index just had its best week in a year.

The number of community cases in Shanghai have declined to near zero, a threshold for the city to lift its harsh lockdowns. Officials are aiming to achieve that goal by May 20. In Beijing, the authorities on Friday denied rumors that the capital will be locked down.

Meanwhile, the drumbeat of policy stimulus vows has kept market hopes alive, even as skeptics bemoan a lack of concrete action. The Communist Party’s Politburo meeting late April reaffirmed support to reach a 5.5% growth target for this year.

“The roughest patch for China’s economy may have passed, with the impact of Covid slowly diminishing in Shanghai and beyond,” said Fang Lei, chief research officer at Beijing StarRock Investment Management Co., Ltd. “Reversal is worth looking forward to once economic figures start to stabilize.” 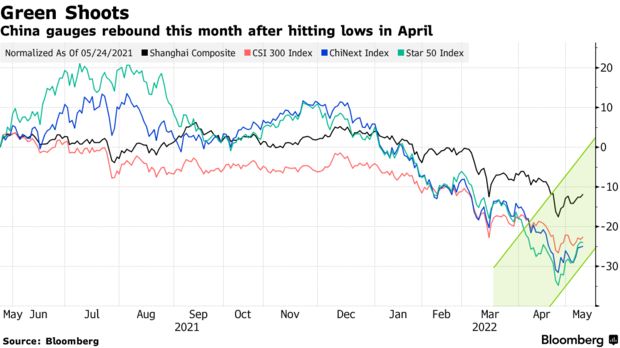 To be sure, any recovery in the market will be bumpy, as seen in the short-lived rebound in mid-March.

What’s more, the dizzying post-lockdown rally of 2020 may no longer repeat itself. The highly-infectious omicron variant spreading in China means businesses face a persistent threat of shutdown orders. On Monday China will likely report the weakest monthly economic indicators since the outbreak of the pandemic two years ago.

Against this backdrop, Blackrock Inc. recently abandoned its bullish stance on China to turn neutral. Morgan Stanley said Chinese stocks are nearing the late stage of a bear market, but is yet to reverse its downbeat view.

And as the Fed’s tightening weighs on overall emerging market assets, the yuan has depreciated about 6% versus the dollar over the past month. Overseas investors offloaded 9.7 billion yuan ($1.4 billion) worth of onshore stocks in May through Friday, after adding 6.3 billion yuan in April.

Still, traders worried of losing out a potential rally are jumping on the bandwagon. The value of leveraged trades in China has started to pick up after falling in all but one day in April, a sign of budding risk appetite.

“Technical support levels show investor pessimism is reaching, or has reached, its nadir,” said Ernie Diaz, director at Tirith Capital Ltd. “We believe lockdown policies are transitory and policy will be able to address the slowdown once the decision is made to adjust. Now is the time to look for value.”