China’s top leaders told government officials last week that this year’s economic growth target of “around 5.5%” should serve as guidance rather than a hard target that must be hit, according to people familiar with the matter.

Leaders held meetings with ministerial and provincial-level officials last week, during which they were told the target won’t be used to evaluate their performance and there won’t be penalties for failing to achieve it, according to the people, who asked not to be identified because they were not authorized to discuss the matter publicly. The leaders also acknowledged that the chances of meeting the target were slim, the people said.

Economists have slashed their forecasts for GDP this year 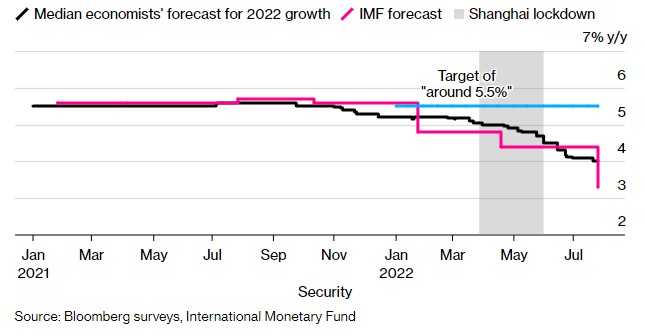 The meetings came the same week as a key gathering of the Politburo, the Communist Party’s top decision-making body, to discuss the economy. An official statement from that meeting didn’t refer explicitly to the GDP target, only calling for the “best outcome” possible for economic growth while sticking to a strict Covid Zero policy.

Leaders told government officials last week that provincial growth targets can also be downplayed, although local authorities are still expected to pay every effort to stabilize the economy and contain coronavirus outbreaks, according to the people.

Betty Wang, a senior economist at Australia & New Zealand Banking Group Ltd., said the signals from Beijing suggest “policy makers are aware of heightened uncertainties which threaten the growth target.” However, that “doesn’t mean there’ll be no policy support,” she said.

The national GDP target of around 5.5% was announced in March, before a spike in Covid infections led major cities including Shenzhen and Shanghai to lock down their populations to curb the outbreaks. Economists have been warning for months that the growth goal would be unattainable this year, predicting growth will come in at 4% or lower.

Beijing has never missed its GDP target by such a large magnitude before. The government didn’t set a target in 2020, during the first wave of the coronavirus outbreak, and only missed it slightly by 0.2 percentage point in 1998.

Chinese leaders have recently been lowering expectations of meeting the GDP goal. President Xi Jinping in June said authorities “would rather temporarily affect a little economic development” than risk the lives and health of people, as he vowed to press ahead with the Covid Zero policy. Premier Li Keqiang last month signaled flexibility on the official target, saying the most important thing is to keep employment and prices stable.

ANZ’s Wang said they’ll be watching closely whether China changes the way it manages its growth target in the future. While that’s unlikely in the near term, the pace of GDP growth will become less important compared with other objectives, such as job stability and environmental, social and corporate governance goals, she said.