Only the retail and manufacturing sectors borrowed more when comparing to the third quarter, the CBBI said in a report released Wednesday, while services growth slowed “across the board.” 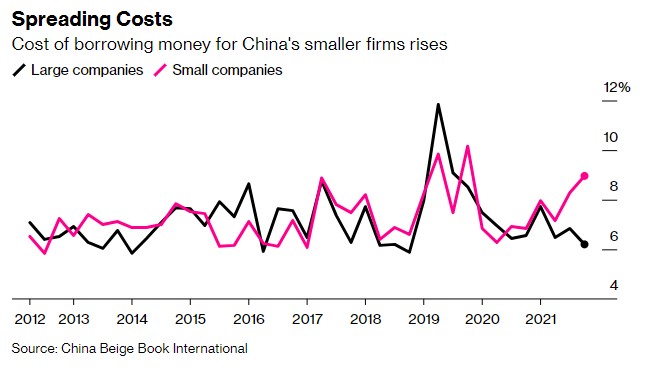 In addition, it became more expensive for smaller firms to borrow, with the gap between the interest rates on loans for small and large companies surging to 2.73 percentage points, the highest level since the survey began in 2012, according to the report.

That’s despite a series of policies aimed at helping smaller companies, and the central bank guiding overall credit growth to pick up in November to counter a slowing economy dragged down by a property downturn and sporadic Covid-19 outbreaks.

“With the Party Congress next fall, even the laziest prediction of ‘more easing in 2022’ is certain to hit home,” said Beige Book Chief Executive Officer Leland Miller, referring to the Communist Party meeting in 2022 that will select the nation’s leaders. “But considering how tight 2021 was from start to finish, that will provide little insight into how China’s economy may look twelve months from today.”

The survey casts doubt on rising expectations that Chinese authorities’ pledge for bigger stimulus will lead to a substantial improvement in investment and growth momentum, according to CCBI, whose report is based on interviews with 4,104 firms between October and December.

Companies in the services sector reported worsened conditions in all respects including sales, profit, employment and borrowing, the report said, as stringent virus controls dampened spending. The sector “could face extreme pressure on both the supply and demand side” in the first quarter, the CCBI said.

Meanwhile, the property industry showed a surprising improvement from the third quarter, but the easier credit environment seen in November reversed in December, according to the report.