Chinese banks may cut their benchmark lending rates for a second time this year, giving consumers and businesses some relief as Covid lockdowns and outbreaks wreak havoc on the economy.

The one-year loan prime rate — the de facto benchmark lending rate — will likely be reduced by 5-10 basis points from 3.7% on Friday, according to 11 of 19 economists surveyed by Bloomberg. Seven of them see a cut to 3.65%, four predict 3.6% and the rest expect no change. 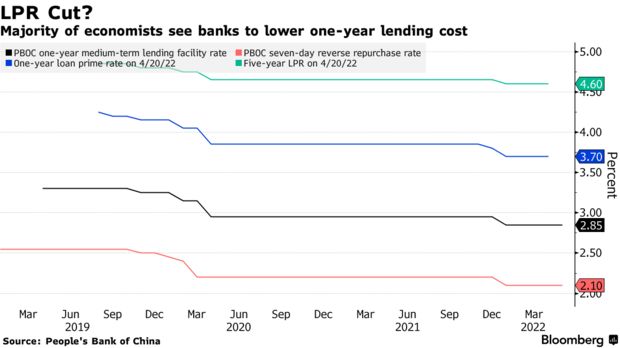 The loan rate is based on the quotes that 18 banks offer their best customers and is published by the People’s Bank of China monthly. It typically moves in tandem with the PBOC’s rate on its one-year policy loans, which was kept unchanged on May 16. However, with borrowing costs for banks coming down, they may have scope to lower loan rates.

“We see some chance of an LPR cut of 5 to 10 basis points this week because banks’ funding costs have moved lower,” said Frances Cheung, rates strategist at Oversea-Chinese Banking Corp Ltd.

It’s cheaper for banks to borrow from each other than from the PBOC, with ample liquidity driving interbank rates well below the central bank’s policy loan rates. Large liquidity injections came from the central bank’s quarter-point reduction in the reserve requirement ratio for most banks in April and a transfer of some 800 billion yuan ($119 billion) in profit to the central government.

A cut in loan rates would help reduce business costs and give consumers much needed relief. The Covid lockdowns and an ongoing property market slump have curbed borrowing, with loan growth weakening sharply in April to the worst level in almost five years. 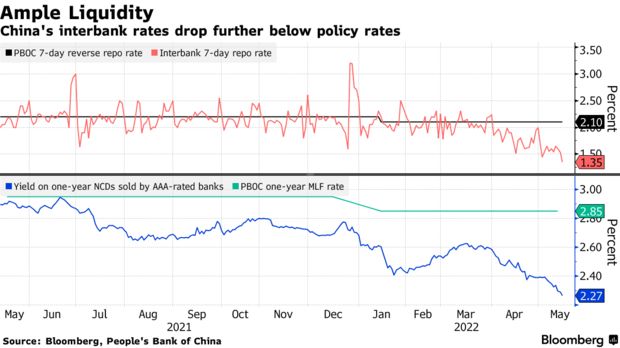 Economists are split over whether banks will reduce the five-year loan prime rate, which is a reference for mortgages. Half of the 14 analysts surveyed by Bloomberg predict the rate will remain unchanged at 4.6%, while the rest expect a cut to 4.55% or 4.5%.

A reduction in the five-year rate would give added support to the property market after China announced a cut to mortgage rates earlier this week. The sector has been under severe strain since last year, with data on Wednesday showing a contraction in home prices for an eighth month in April.

Banks have another incentive to lower the LPR: The weighted average deposit rate among banks declined by 10 basis points in the last week of April, the PBOC said in a recent report. The central bank had been trying to drive down deposit rates by seeking to alleviate excessive competition among lenders to attract deposits. Lower deposit rates mean banks can ease lending rates without hurting profits.

Hong Kong stock index tumbles the most in two weeks, weighed down by Tencent’s earnings miss and US rout

No, zero-COVID has not diminished China’s economic power

Ant Group, Tencent, Baidu and Others Opt for Self-Regulation of Digital Collection…

Up or down? Prospects for China’s stocks are split in the…