It’s official: Chinese equities are once again in vogue, after months of regulatory crackdowns, deleveraging and stringent virus curbs wiped trillions of dollars off benchmark gauges.

A Bloomberg survey of 19 fund managers and analysts predicts that benchmark stock indexes in China and Hong Kong will post gains of at least 4% by year-end to outperform their global peers. About 70% of those polled plan to maintain or bolster holdings of shares in the mainland and the financial hub in the next three months.

The optimism marks a stunning reversal from March when investors raced to trim exposure to Chinese assets on fears that the nation’s coronavirus lockdowns and the war in Ukraine would dampen economic growth. A recent easing of virus restrictions has propelled the CSI 300 Index to the brink of a bull market, and a loose policy stance has helped local equities defy the recent selloff in global stocks.

“Covid restrictions will gradually ease and under the backdrop of stability as the overarching priority, the government may provide a relatively loose monetary environment in the second half, with the liquidity benefiting stocks,” said Fang Rui, managing director at Shanghai WuSheng Investment Management Partnership. “We’re quite optimistic on valuation recovery also lifting the indexes higher.” 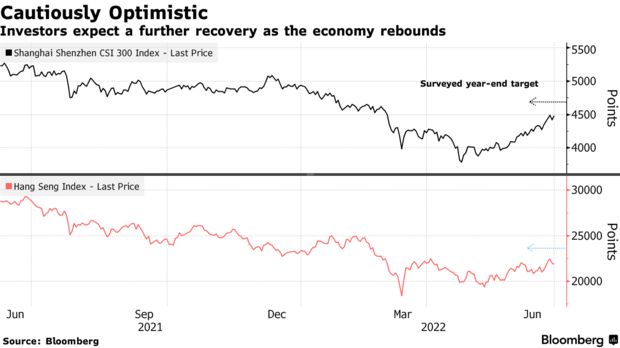 The survey of investors and analysts in China and Hong Kong sees the Shanghai Composite and CSI 300 gauges rising 4.4% and 4.6%, respectively, for rest of the year, with most of the gains taking place in the third quarter. They expect an 8% advance for the Hang Seng Index and anticipate further policy steps to boost growth.

The optimism is reflected in the recent bounce in Chinese shares, with the CSI 300 gauge rallying about 19% from an April low after Beijing lifted lockdowns in major cities — a performance that’s among the best in global markets.

Momentum is also turning more positive among US-listed Chinese stocks, with the Nasdaq Golden Dragon China Index poised for its first quarterly gain in more than a year. On Wednesday, investors added $333.1 million to the $8.5 billion iShares MSCI China ETF (MCHI), the largest one-day inflow since the fund’s inception in 2011, according to data compiled by Bloomberg.

The authorities cut quarantine times for inbound travelers by half this week and policy makers have also signaled that regulatory crackdowns on tech giants will ease as they pivot toward supporting growth.

That’s fueled a rush of buying as global funds purchased a net 73 billion yuan ($10.9 billion) of onshore stocks via trading links in June, the largest monthly inflow since December. Capital flows into China are set to get a further boost when dozens of mainland listed ETFs are made available to overseas investors through the stock connect program starting July 4. 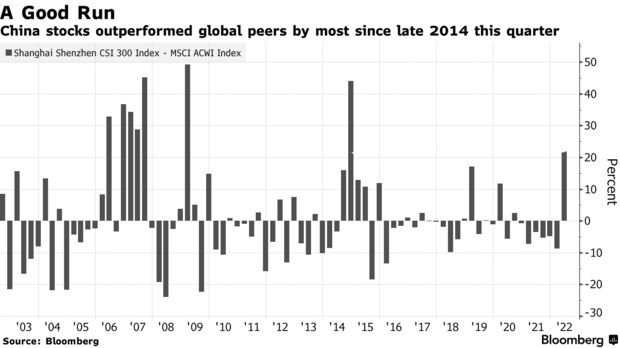 The upbeat forecast for Chinese equities contrasts with the more negative outlook for US stocks, with Morgan Stanley and Goldman Sachs Group Inc. among those predicting that Wall Street will see further declines.

Still, those surveyed warned that the outlook for China’s equities is not one of unbridled optimism. Domestic growth may fall short of analysts’ expectations, which would remove a key pillar of support for local stocks, they said. And even with the forecasted gains, the gauges are still off last year’s highs after a series of regulatory crackdowns led to trillions of losses.

The world’s second-largest economy showed signs of further improvement in June but analysts say the government may miss its annual growth target of around 5.5% due to its adherence to strict virus rules. President Xi Jinping on Tuesday declared Covid Zero the most “economic and effective” policy for China, signaling that the authorities will continue to press ahead with the strategy.

In contrast, there’s relatively less optimism about other Chinese assets. For example, Citigroup Inc. expects the offshore yuan to drop to 6.95 per dollar this year from around 6.69 now as imports rise and the services deficit widens with a reopening of the economy. Policy divergence and the need for further easing will add to the pressure, strategists Philip Yin and Gaurav Garg wrote in a note this week.

For sovereign bond investors, the focus is on the supply pipeline and any signs of further monetary easing, said Kiyong Seong, lead Asia macro strategist at Societe Generale SA. He sees 10-year yields rising as high as 3.2% by mid-2023 from around 2.81% now.

The outlook is slightly more upbeat for China’s junk dollar bond market, which has lost more than 25% this year. March’s record low prices for high-yield dollar bonds are unlikely to be repeated, according to Hayden Briscoe, head of APAC fixed income at UBS Asset Management. “The bulk of the developers have either defaulted or restructured,” he said. “The survivors will be in a better place. We’ve started to see sales activity pick up and more confidence in onshore bank lending.”

All this may help to explain why multi-asset strategy portfolio managers such as Cambridge Associates LLC prefer to focus on Chinese equities for now. The firm, which invests over $600 billion on behalf of institutional clients, has replaced its overweight China duration trade with an overweight position on local equities.

“Negativity is so intense even now, if you think the Fed will take rates to 3% to 4% and China short rates will come down, it would cap the upside of the yuan,” said Aaron Costello, regional head for Asia at Cambridge. “From a risk reward perspective, I’d rather take that on the equity side than on the bonds side.”

How and Why Chinese Firms Are Listing in Europe Now