China’s Stock Rally Is Becoming a Lifeline for Asian Portfolios

Chinese stocks’ outstanding resilience in a global selloff is giving Asia investors hopes that regional equities will get a lift in the second half.

In a brutal month that’s seen the world’s major stock indexes tumble into bear markets, Chinese shares have jumped. Their high weighting has helped put the Asian benchmark on track to beat a global gauge by the most since October 2020 this month.

China’s all-out efforts to revive the economy — in contrast to aggressive monetary tightening in the US and elsewhere — is also supporting the earnings outlook for the region.

It’s “very likely that China stocks will help Asia outperform given that China’s stimulus effect will be more pronounced in the second half,” said Kerry Goh, chief investment officer at Kamet Capital Partners Pte. “Economically, Asia is more dependent on China than the rest of the world.” 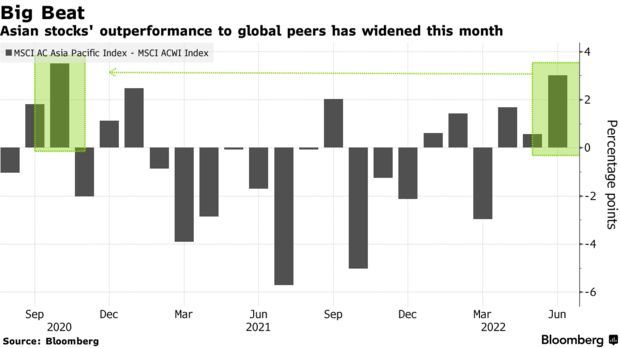 Equities in China and Hong Kong account for about a quarter of the MSCI Asia Pacific Index, which has outperformed an index of global stocks by almost five percentage points over the past month. Meanwhile, China’s CSI 300 Index has jumped 7.6% in the period, rebounding from sharp losses earlier this year.

Driving gains in China are loose monetary policy, a partial lifting of virus curbs and bets that the era of tech crackdowns is over. Even with Covid headwinds, a majority of analysts still expect China’s economy to grow more than 4% this year, versus 2.6% for the US, which will offer tailwinds to Asia where most countries list China as their largest trade partner. 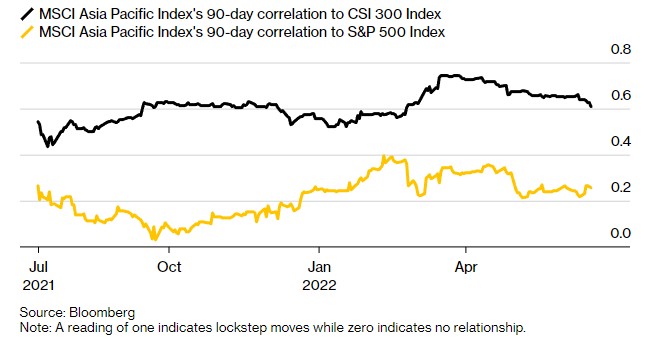 To be sure, Asia can’t be completely immune to a slowdown in the world’s largest economy. Goldman Sachs Group Inc. strategists said positive returns for Asia may be difficult if the US equity market remains under pressure, while adding that “the case of Asian outperformance remains strong.”

The US is at the epicenter of monetary tightening but China, Asia’s largest market, “is in a different point in its cycle and is currently easing policy,” strategists including Tim Moe wrote in a note earlier this month.

An analysis by Societe Generale SA strategists also showed that during 11 bear markets of the S&P 500 since 1987, Asian equities have declined as well but still outperformed the US in more than 50% of cases.

As Asia markets chug along in the second half of the year, a likely scenario is a divergence within countries but doing better than other regions on average.

China looks to be in pole position to outperform, with bullish calls growing. Those more sensitive to global macro headwinds — such as South Korea and Taiwan — are seen by Goldman Sachs and SocGen as likely to be more vulnerable.

“China’s equity market should gain momentum through the balance of the year,” said Gary Dugan, chief executive officer at the Global CIO Office. “It will help Asia unless other parts of Asia are undermined by a need to defend their currencies with outsized interest-rate increases.”

Delusional for US to overwhelm China and Russia by brute…