Beijing’s pledge to ensure economic stability is being tested by renewed turbulence in the nation’s financial markets, prompting officials to take more conspicuous measures in what is a politically crucial year.

Investors have had a lot to digest this week. Tencent Holdings Ltd.’s partial divestment of a listed company exacerbated a $1.2 trillion selloff in Chinese tech shares. One of the country’s largest bad-debt managers lost more than half its value in the equity market after a $6.6 billion bailout. China Evergrande Group suspended trading after it was ordered to demolish dozens of apartment blocks. Another developer defaulted on a little-known loan, sending the nation’s junk dollar bonds tumbling. A hawkish Federal Reserve knocked the ever-resilient yuan, prompting a warning from state media. 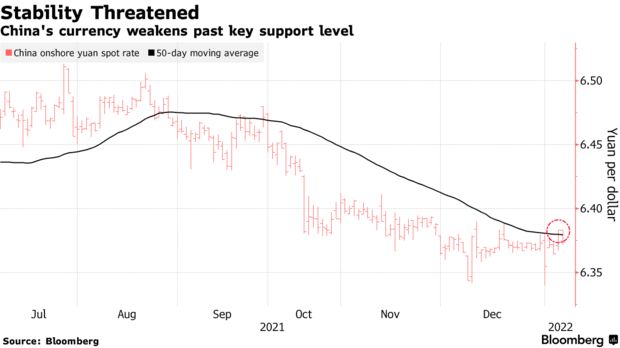 The moves appear to be having the intended effect. The Hang Seng China Enterprises Index of stocks listed in Hong Kong rallied the most in a month on Friday, with property developers and tech shares leading the advance.

Turmoil in financial markets risks overshadowing this year’s carefully stage-managed events. The Beijing Winter Olympics – already the target of a diplomatic boycott led by the U.S. – takes place from Feb. 4-20. In the autumn, the Communist Party will announce a twice-a-decade leadership reshuffle. President Xi Jinping is widely expected to extend his rule as party chief and install allies in key positions, while Premier Li Keqiang is expected to retire. The party’s top decision makers vowed last month to ensure stability in the economy in 2022.

The Hang Seng China Enterprises gauge slumped to an almost six-year low this week, after plunging 23% last year in its worst performance since the global financial crisis. For the week, Shenzhen’s ChiNext gauge capped a 6.8% loss, the most since last February. A Bloomberg index of Chinese junk bonds is poised for its largest retreat in two months, while the yuan is heading for its biggest decline against the dollar in four months.

Threats to the economy are multiplying. China’s zero-Covid strategy means outbreaks are being met with strict containment measures that disrupt manufacturing, shipping and consumption. Surging costs may challenge China’s foreign trade. A wall of maturing debt and a surge in seasonal demand for cash in January is putting pressure on the financial system. The Federal Reserve’s faster-than-expected tightening risks reversing the flow of global capital away from China. 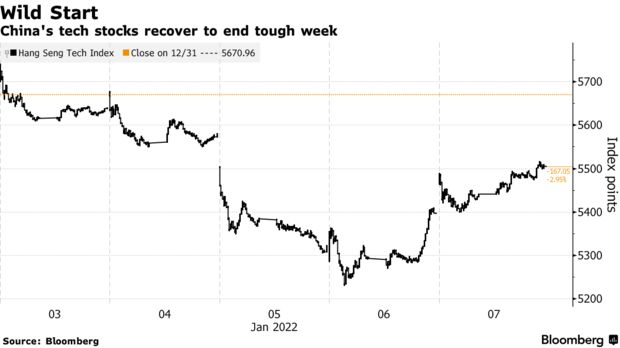 China’s efforts to maintain its zero-Covid policy are under strain. The city of Xi’an is enduring its 15th day of lockdown. Hundreds of thousands of workers at iPhone maker Foxconn Technology Group and Huawei Technologies Co. are being tested in the eastern metropolis of Zhengzhou, while no one is allowed to leave Shenzhen without a negative Covid test after two infections were found locally. More than two dozen Hong Kong officials have been sent to a quarantine camp due to possible exposure to the omicron strain after attending a birthday party.

While authorities are taking steps to bolster the property industry and stabilize markets, they’re unlikely to go too far with stimulus measures. Beijing won’t want to risk inflating asset prices after spending much of the last year popping speculative bubbles. The People’s Bank of China in December said it wouldn’t flood the financial system with cash, and the only state-backed rescue of a struggling developer was tough on the company.

“We do not believe in the large ‘policy bazooka’ intervention, nor direct bailouts, as likely scenarios,” Citigroup Inc. strategists including Dirk Willer wrote in a note.

Kazakhstan unrest: how will China’s economic interests be affected by the protests?