China’s services activity slumped to its weakest level in more than two years in April as Covid outbreaks and lockdowns continued to pummel consumer spending and threaten economic growth.

The Caixin China Services purchasing managers’ index dropped to 36.2 in April, the lowest since February 2020, Caixin and S&P Global said in a statement Thursday. That was below the median estimate of 40 in a Bloomberg survey of economists and was the second month below 50, marking a contraction in output. 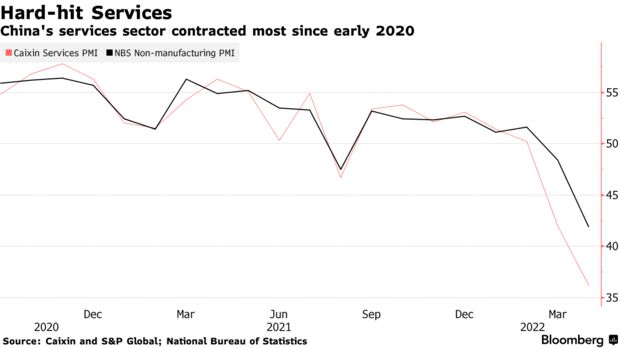 China’s economy is reeling from a series of restrictions to contain the rapidly-spreading virus. April data captures the impact of a lockdown in Shanghai, where millions of residents were confined to their homes for weeks.

“The new round of Covid-19 outbreaks hit the service sector hard,” Wang Zhe, senior economist at Caixin Insight Group, said in the statement. “Both the services PMI and the measure for new business dropped to the lowest since February 2020, as regional Covid outbreaks limited both supply and demand.”

The findings from the private survey is largely in line with the gloomy picture from the official non-manufacturing purchasing managers’ index released over the weekend. That gauge also dropped to its worst level since February 2020, when China was battling the initial virus outbreak in Wuhan. The official survey tracks larger companies and includes the construction sector, while the Caixin survey focuses more on smaller ones.

Virus flareups have continued into May, with cases in Beijing prompting local authorities to seal off parts of the capital city and launch rounds of mass testing.

The US should match words with deeds in implementing…