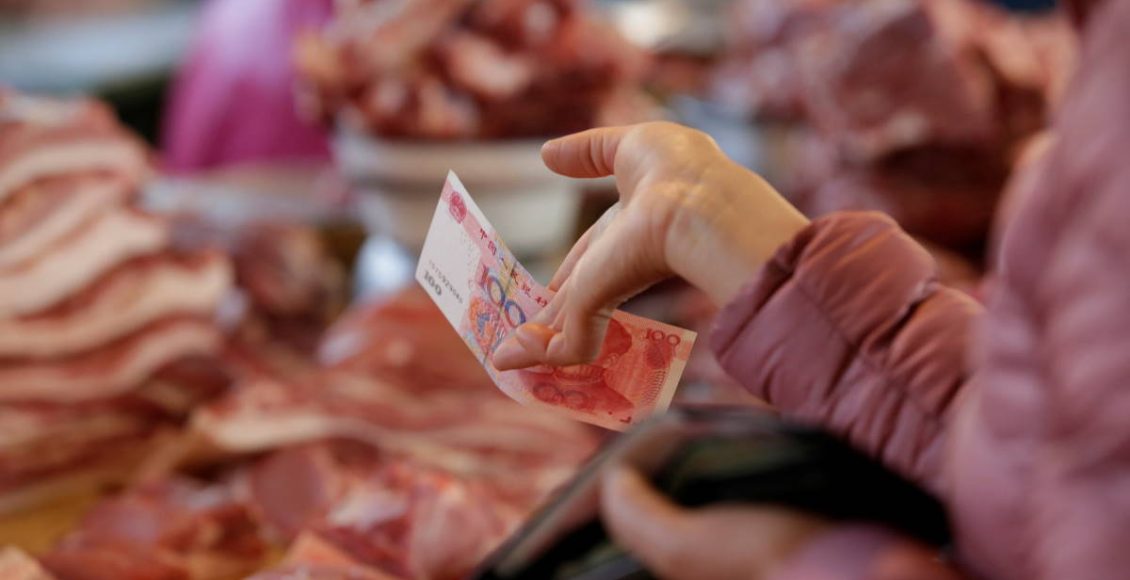 China has largely escaped the crippling consumer inflation afflicting other major economies, but that may be starting to change as pork prices surge.

The government has embarked on a campaign to rein in the market for pork, just as higher costs of its staple meat threaten to breach inflation targets and complicate efforts to stimulate growth. Hog futures in Dalian have risen to their strongest in a year, while wholesale meat prices are at a six-month high.

Beijing has been trying to subdue commodities prices for well over a year as the pandemic and then the war in Ukraine caused shortages of materials from copper to coal. But the surge in pork looks to be the start of a well-established domestic cycle that usually lasts three or four years. Goldman Sachs Group Inc. estimates it could push consumer price growth above the central bank’s 3% target.

In a sign that authorities are getting worried, the nation’s top economic planner said it’s studying selling pork from state reserves to prevent prices from rising too quickly, according to a statement on Tuesday. It also asked major hog farmers to maintain normal output and not to hoard supplies.

Here are five charts explaining the upswing in prices and how they could affect the inflation outlook. 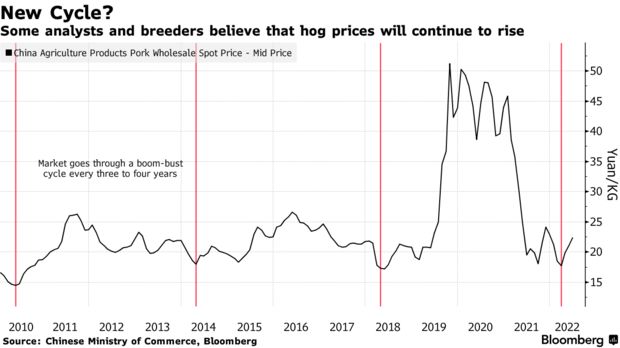 Officials have extensive experience of trying to tame the pork market in recent years, after prices spiked to an all-time high in 2019 in the wake of a nationwide outbreak of African swine fever, a fatal pig disease. They can try and manage herd numbers with farmers directly, encourage banks to lend to breeders, and release pork held in state reserves. However, they’ll be working against powerful forces.

“The market is always self-reinforcing,” said Lin Guofa, head of research at consultancy Bric Agriculture Group. “When everyone believes prices will go up, they tend to hoard, and things can get out of control. But once expectations reverse, prices can dive deeper as well.” 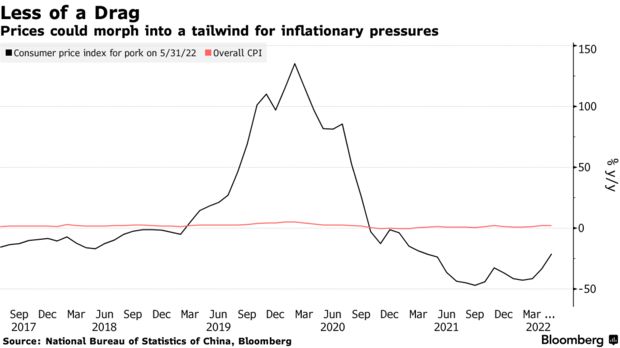 More expensive pork is an obvious drag on household budgets already strained by the government’s Covid Zero restrictions, which have hit the economy. In addition to that direct impact, the staple is the biggest food component in the consumer price index, amplifying the effect of rising prices.

As of May, pork prices in the CPI basket were still lower than they were a year ago. Without that, consumer prices would have risen 2.4% instead of 2.1%, but that effect could reverse as prices continue to rise.

In a note last week, Goldman Sachs joined other economists in predicting pork prices could push consumer price growth above the central bank’s 3% target in the second-half of the year, making it more difficult for the People’s Bank of China to continue easing policy without risking inflation getting out of control. 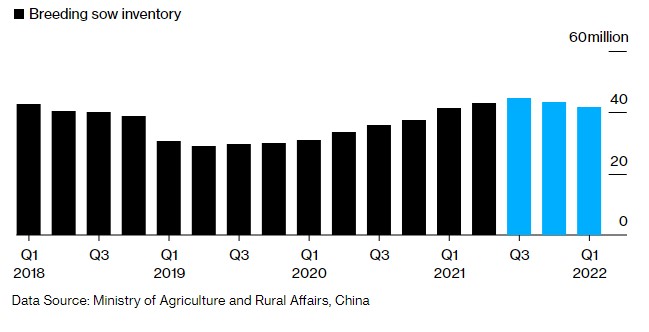 Just like any other commodity, the main driver of pork prices is supply and demand. The central issue is that the supply of piglets has been lacking after a collapse in prices last year forced a more extensive cull of sows than usual.

Sow numbers fell from the end of the third quarter last year through the end of March, and with breeding to gestation, birth and slaughter taking about 10 months, the lack of fresh meat is now starting to become apparent. That’s especially true as China’s economy revives after lockdowns in Shanghai and elsewhere forced consumers into hibernation.

Feed costs are another important factor for pig numbers, and are currently a cause for concern. The ratio of hogs to corn prices is a closely watched gauge, with a lower number meaning breeders are making less profit on each animal and are therefore less willing to boost production.

The break-even point is where hog prices are roughly six times those of corn, a key feed ingredient, according to Citic Securities Co. But the ratio has been below that for four consecutive months through April, and hit the lowest level in at least two years in March, as global crop prices skyrocketed. It remains to be seen whether recent hog price increases will cover the surge in feed costs and encourage farmers to increase the size of their herds. 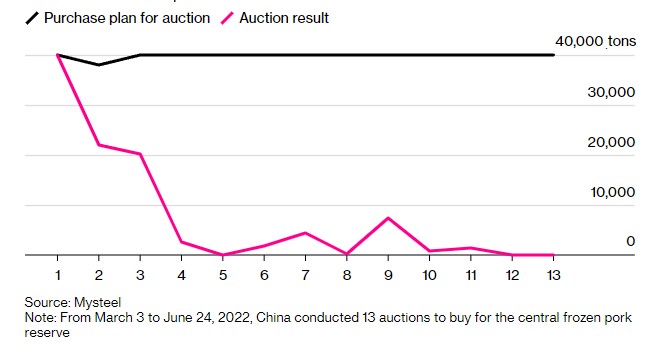 The government has been trying to stock its reserves with frozen pork since March, when the lower-than-normal feed ratio implied widening losses among breeders.

But as the market has recovered, the auctions have found it increasingly difficult to lure sellers. The government planned to buy 160,000 tons in June, but only managed to complete a tiny sliver of that, suggesting that traders preferred to hold pork in anticipation of higher prices.